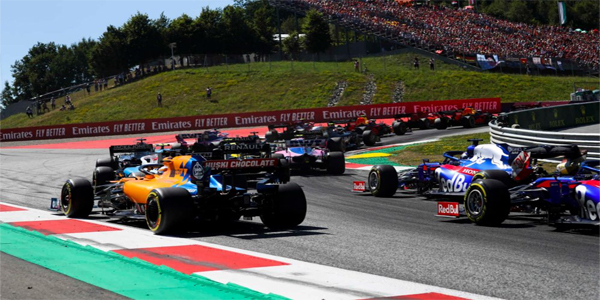 The soccer leagues in Europe seem to be getting by. Formula One will hope to do the same. The 2020 season kicks off about 3.5 months later than it should have with the Austrian Grand Prix on the Red Bull Ring in Spielberg on Sunday July 5.

At present, back-to-back races are scheduled in Austria, with next weekend’s Styrian Grand Prix as the next event. Only eight events are on the calendar from now through September 6, but the hope would be to add more races as Europe has had a lot more success with the containment of COVID-19 than the United States and other parts of the world.

Here are the odds at 5Dimes Sportsbook for the 2020 Austrian Grand Prix:

Reigning Formula One champion Lewis Hamilton is the +195 favorite and reigning two-time Austrian Grand Prix champ Max Verstappen is the second favorite at +220. Hamilton won the race back in 2016. Valtteri Bottas is the fourth favorite at +650 and he was the winner here back in 2017.

Hamilton won 11 races last season en route to his third straight championship and fifth championship in six years. Something about Austrian has perplexed him and his team, however. He was fifth last year and fourth in 2017. He retired from the race in 2018, which is the only time he has had to do that in the last three years. There is just something about the Red Bull Ring that Hamilton cannot master.

He is the best driver on the circuit and maybe that will help him here with all of the drivers shaking off a little rust. He may also have the best team with his Mercedes-AMG Petronas Motorsport F1 team. If there is one track where Hamilton is vulnerable, though, this seems like the one.

His Petronas teammate Bottas had that win back in 2017, but was also forced from the 2018 race and finished third last year. He had four wins over the course of the season and finished second to Hamilton in the season-long points chase. When he wasn’t forced to retire, which happened twice, he had those four wins and seven runner-up finishes. He’s definitely likely to be there.

Verstappen runs for the Aston Martin Red Bull Racing team with a Honda engine and the Belgian really likes this course. Two of his five wins over the last two years have come here. He was also second back in 2016. From a consistency standpoint, Verstappen isn’t up there with Hamilton or Bottas, but this is his track to shine, hence the +220 price.

The biggest threat to Hamilton, however, could very well be 22 year-old Charles Leclerc. This is only really his third official year in F1, but he scored his first two career wins in Belgium and Italy last year. He was also runner-up twice and finished third six times. He finished fourth in points and even overshadowed his Scuderia Ferrari teammate Sebastian Vettel, which is no easy feat.

Leclerc is +525 to start the year on a high note. Given the late-season push in his sophomore season, big things could be coming in his third year.

Vettel is +690 and the last guy given a really good shot by the oddsmakers, who have listed Alexander Albon at +2750. Vettel has finished fourth, third, and second over the last three years. He only had one win last year after winning five races back in 2018. This will be the 32-year-old’s last season with Ferrari.

There will be a lot of uncertainty with the first race as the drivers shake off the rust. Hamilton’s inexplicable woes at Austria open the door for some other drivers, so we’ll look at Leclerc at +525, as Mercedes has struggled here the last two years.

Coverage of the Austrian Grand Prix will be bright and early at 9:10 a.m. ET on ESPN 2.