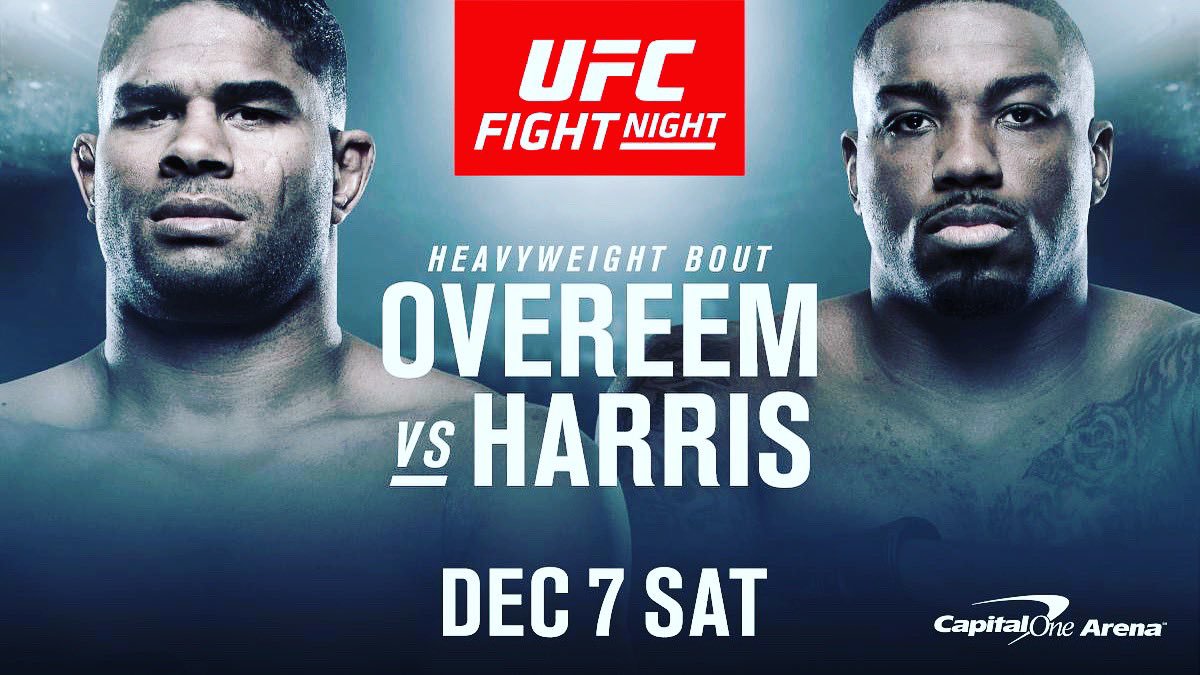 The UFC grind returns this week with an event in Washington D.C. at Capital One Arena. It is UFC on ESPN 7, which will draw a big crowd thanks to 12 solid matches and a main event in the heavyweight division between Alistair Overeem and Jairzinho Rozenstruik.

This fight card serves as the appetizer to next week’s main event at UFC 245 in Las Vegas with three title fights. We’ll break it all down with odds from 5Dimes, but be sure to shop around your jurisdiction for the best odds on these fights.

We don’t have to dig too much into the opening fight between Makhmud Muradov and Trevor Smith. Muradov is a -420 favorite with a total of 2.5 and the over juiced at -150, so the expectation is for Muradov by decision or stoppage here. You can cut down on the juice with some props, but Smith, who has lost three of his last four fights and is coming off the shelf, looks like a real long shot to pull the upset.

The same can be said about UFC debutant Mallory Martin against Virna Jandiroba. Jandiroba is the -265 favorite and the round prop suggests that we are very likely to go the full 15 here. Martin, who lost to Maycee Barber back in LFA, is 2-0 this year, including a win on the Dana White Contender Series. Jandiroba, who used to headline events in Invicta, lost her UFC debut to Carla Esparza, but she’s stepping back down in class here.

Matt Wiman is a name that UFC fans know, but, once again, we’ve got a big line here. Wiman is +260 to Joe Solecki’s -320 with another fight expected to go deep into the third round. Wiman was knocked out earlier this year by Luis Pena in his first fight in 4.5 years. Solecki won his Contender Series fight in the first round by guillotine and has an excellent submission game. This is a huge opportunity for him and he should take advantage.

We finally have what looks like a competitive fight between Matt Sayles and Bryce Mitchell in the featherweight division. Sayles has been bet into the small -115 favorite here with -105 on the takeback for Mitchell. Mitchell, who was on Cycle 27 of TUF, is 11-0 in his career, including a win over Bobby Moffett back in March. Sayles is 1-1 in his UFC career and sits at 8-2 overall. This should be one of the best bouts of the undercard and a tough call overall.

Jacob Kilburn is yet another big dog on this fight card at +260 to Billy Quarantillo’s -320 price tag. Quarantillo is another DWTNCS find after beating Kamuela Kirk with a third-round KO. Kilburn, who lost to Moffett on DWTNCS last year, has been fighting in small local circuits and took this fight on short notice when Chris Fishgold backed out on November 27. This price may be a tad big for Quarantillo.

The main card kicks off with Ricky Simon and Rob Font at 135 pounds. Simon is looking to bounce back from his second career defeat, a 46-second showing against Urijah Faber. That was more of a fluke than anything else, but it was a big step up in class for Simon and so is this fight against Font. That would worry me with the short underdog price. He’s had four UFC fights and lost in glorious fashion to the best opponent he faced.

The issue here is that Font is coming off of almost a 12-month layoff. The 32-year-old has had his share of disappointing fights throughout his career and is only 2-2 in his last four fights. He’s the better, more accomplished fighter here, but the layoff could be a great equalizer here. Furthermore, Simon’s manner of loss last time out makes him very dangerous.

Common opponent Alejandro Perez knows all about these two guys. Stamann beat him by unanimous decision back on March 2 at UFC 235. Song knocked him out in 124 seconds at UFC 239. Perhaps Stamann softened him up for Song, but Song has won four in a row in the UFC to start his career in the Octagon and is a -200 favorite to make it five in a row in this one.

Not many of the fighters Stamann has beaten are still around these days. Song has bounced around between lightweight, featherweight, and bantamweight. This fight will be at bantamweight, his fourth straight at that class. He’s shown a lot of striking power at this weight and that would be the worry here for Stamann.

Yana Kunitskaya has lost to some of the best in the sport. Of her four losses, her most recent ones are against Cris Cyborg and Tonya Evinger. Aspen Ladd isn’t in that department yet, but the 24-year-old is a really promising prospect. She was knocked out in 16 seconds in her last fight by Germaine de Randamie in the main event back on July 13.

Ladd and her camp weren’t thrilled with how quickly the fight was stopped, but it sure looked like she was in trouble and the stoppage may have saved her a lot of additional punishment. Kunitskaya isn’t a prolific striker and she hasn’t been as she has moved up the ranks. That’s how we get Ladd as a big favorite here in a bounce back spot for the California kid.

You don’t earn the nickname Skyscraper for nothing. Stefan Struve stands 6-foot-11, but he also has 11 losses in his pro career with 40 fights under his belt. He’ll look to avoid a 12th as an underdog to Ben Rothwell in this heavyweight scrap. Struve scored a nice win over Marcos Rogerio de Lima last time out, getting back to his roots for his first submission win in 2.5 years.

Unfortunately for him, Rothwell is a pretty versatile fighter with a good submission background as well. Rothwell, though, has dropped three straight to Andrei Arlovski, Blagoy Ivanov, and Junior dos Santos, though the dos Santos fight was 3.5 years ago. The Arlovski and Ivanov losses came earlier this year. Both fighters need a win. Also, the heavyweight division needs better fighters in the second tier. Fights in the 6-foot-3, 6-foot-4 range have given Struve fits recently.

This is a solid fight in the women’s strawweight division as Marina Rodriguez has been bet into the clear favorite against Cynthia Calvillo. Rodriguez was one of many DWTNCS finds and she is 2-0-1 in the Octagon since signing a deal. She’s coming off of impressive decision wins against Tecia Torres and Jessica Aguilar. The 5-foot-6 Brazilian has not lost in 13 pro fights.

Calvillo has had a nice bounce back from her first loss to Carla Esparza just about two years ago, but Calvillo has only fought twice since and hasn’t fought since February 17 when she beat Cortney Casey. You really have to wonder if Calvillo is ready for this step up in class with a long layoff. My guess is no.

Suriname native Jairzinho Rozenstruik is even money to score the most notable win of his career against grizzled veteran Alistair Overeem. Rozenstruik is 3-0 in UFC with wins over Junior Albini, Allen Crowder, and Andrei Arlovski. His last two fights have taken a total of 38 seconds, hence the rapid turnaround from that UFC 244 fight on November 2. Crowder slipped and got punched in the face twice. Arlovski caught a short left between the ear and jawbone and went down. The punching power is astounding, but the manner of winning leaves us wondering what happens when he gets into a real fight with a good fighter.

He should get that here against Overeem. Of course, Overeem is now 39 years old and has one fight in the last 13 months. It was an impressive win over Alexey Oleinik by first-round knockout, but still. We’ll have to see if Overeem, who has 17 career sub wins, can maybe get Rozenstruik on the mat. Nobody has done that yet to force him to defend on the ground. Overeem is savvy enough to figure it out.