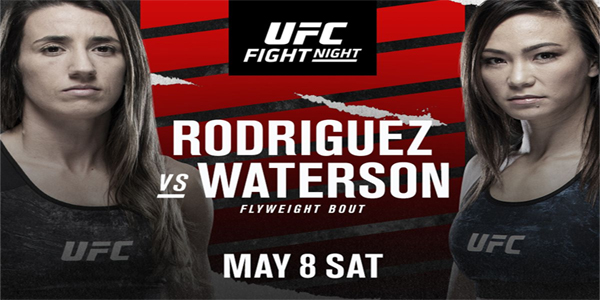 We’ve got a lot of MMA action this week, but the signature event, as it is always is, will be a UFC card. The main event of UFC on ESPN 24 will feature women from the flyweight division, as Marina Rodriguez takes on Michelle Waterson.

TJ Dillashaw and Cory Sandhagen was set to be the main, but Dillashaw got hurt in training. The UFC Apex training facility will host this one, which means we have the smaller Octagon in play once again. We’re used to that by now, but it is a factor.

We’ll use the odds from BetOnline Sportsbook to put together a comprehensive breakdown of the card and the 12 scheduled fights in hopes of finding some good wagers.

The UFC debut for Guyanese fighter Carlston Harris starts us off for Saturday’s action. He is a -155 favorite against Christian Aguilera, who is 1-1 in the UFC to this point. Harris has fought in several different promotions, including Shooto and Brave, and it sure looks as though he heads into this one with the benefit of the doubt. He does seem to have more paths to victory, as Aguilera only really wins via knockout. A quick stoppage wouldn’t be a surprise here, so +135 may be the best look with an under 1.5 ticket.

It really didn’t take long for Cameroon middleweight Tafon Nchukwi to make his UFC debut. After three quick wins by knockout, Nchukwi got his opportunity on the Contender Series and won easily. For good measure, he beat Jamie Pickett by unanimous decision a little over three months later.

Now Nchukwi faces Jun Yong Park, a veteran of three UFC fights with a record of 2-1. The 30-year-old Park is a more experienced fighter and if Nchukwi cannot secure a knockout, the better Park’s chances are at a win. Nchukwi is the longer, lankier fighter, though. I do think a KO is very much in play one way or the other here and like the under 2.5 at +100.

Zarrukh Adashev badly needs a win. The 28-year-old Uzbekistan native is 0-2 in UFC since signing his contract after a 3-0 run in Bellator. The same can be said of Ryan Benoit, a longtime UFC fixture that is 0-2 since returning from more than two years away. This is a short and sweet handicap in that neither fighter is worth your money. Both need the fight badly, so effort isn’t a question, but neither fighter is deserving of a dollar. Benoit’s striking power has not been there in his last two fights, so over 2.5, despite the heavy juice, is the best bet.

Ludovit Klein is the biggest favorite on the UFC Vegas 26 card. He’s won eight in a row, including a very impressive debut at UFC 253 against Shane Young with a first-round knockout from a huge head kick. The 26-year-old already has 19 fights to his name with eight knockout wins, eight submission wins, and a decision against just two losses.

This is a tough spot for Mike Trizano to return. The TUF 27 champion has not fought in nearly two years. He won TUF 27 at lightweight, but will fight again at featherweight for the second straight time. This is just a bad spot for him and we’ll look to pair with Klein with somebody else in a money line parlay.

Money has come in on Kyle Daukaus and the under for this fight against Phil Hawes. Daukaus, the former CFFC champion, lost for the first time ever against Brendan Allen, but was seconds away from a submission that might have won him the fight. He bounced back nicely to beat Dustin Stoltzfus at UFC 255.

Hawes is a nice prospect. He has three wins in UFC thus far and a tremendous wrestling background. Both guys are solid fighters, but the betting markets are speaking loud and clear about the side that they like in this one. This looks like one of the best fights on an otherwise weak card. I can’t argue with the Daukaus money here.

The first of two heavyweight fights on the card has been a long time coming. This fight was supposed to take place in March, but Ben Rothwell was injured during training. We now have two guys off of lengthy layoffs, as the 35-year-old Philippe Lins has not fought since June and Rothwell since October.

Lins is 0-2 in UFC with losses to Andrei Arlovski and Tanner Boser exactly six weeks apart. The former PFL champ is actually just 4-4 over his last eight fights. Rothwell is 39 and has dropped three of his last five, but as Lins has faced better competition, he has struggled. Rothwell may just be getting old. He still should win this fight and the markets have swung a little in his direction.

Amanda Ribas’s name should be in the bright lights of the main event, but her knockout loss to Marina Rodriguez back in January is the reason why she’s in the first fight on the main card against Angela Hill. It was a really big setback for Ribas, but at the same time, maybe one we should have seen coming. Her previous two fights were against Randa Markos and Paige VanZant, neither of whom should be in MMA any longer.

That was only the second loss for Ribas in her career, with the other against Polyana Viana in Jungle Fight. Both are by knockout. Angela Hill has five career knockouts in 22 fights and hasn’t had one in any of her last four fights, as she’s gone the distance in each one of them. She’s 2-2, with wins over Loma Lookboonmee and Ashley Yoder and losses to Michelle Waterson and Claudia Gadelha. I certainly put Ribas up there more with Waterson and not with the fighters Hill has beaten. Ribas is a good parlay piece to put with Ludovit Klein in an earlier fight.

It has been quite a while since we’ve seen Gregor Gillespie. He went into his match against Kevin Lee with a perfect 13-0 record. He left 13-1. The Division I gold medal wrestler at Edinboro University is back in search of redemption. He’ll try to get it against Diego Ferreira, a fighter that recently had a winning streak of his own snapped by Beneil Dariush.

You can still see the respect that Gillespie gets in the markets, even with the long layoff. It doesn’t hurt that Ferreira returned from 13 months on the shelf on lost, but it was a split decision that could have gone either way. This looks like a closer fight than the line would indicate based on what both guys have done and their respective strengths and weaknesses, so the price is better on the taller and rangier Ferreira, though Gillespie probably does win.

A quick finish is expected in the heavyweight battle between Maurice Greene and Marcos Rogerio de Lima. Greene stands 6-foot-7 and has a huge reach advantage here, but he’s had that in a lot of fights and is only 9-6 in his pro MMA career. That includes a couple of 2020 losses and defeats in three of his last four fights. The recent results haven’t been that great for de Lima either, who has dropped three of five.

Bigger fighters Alexandr Romanov and Stefan Struve have beaten de Lima recently by submission. Green has five submission wins to his name. It has actually been his preferred method of victory. I think there are a couple of ways you can look at this fight. The low total and under juice suggests a finish. Submissions aren’t really part of de Lima’s game. Greene by submission and de Lima by knockout create a decent little arbitrage play in the prop markets as those get posted and it keeps you from having to pick an outright winner in a fight that could probably go either way.

Neil Magny has gone the distance in each of his last four fights and looks to be on track for another one here against Geoff Neal. Magny, who typically fights a lot in a calendar year, did not fight at all in 2019, but made up for it with three wins in three fights in 2020. Then he started 2021 with a loss to Michael Chiesa in the 25-minute main event on January 20. Chiesa won 49-46 across the board in a fight that was pretty boring overall. Neither fighter landed 100 strikes and Chiesa kept Magny on the ground for a long time.

Neal is also coming off of a loss in a main event. He lost to Stephen “Wonderboy” Thompson in his first fight in over a year. That one went 25 minutes and broke a string of KO victories for Neal. That was a much more active fight, as Thompson landed nearly 200 strikes and Neal got into the 100s. Thompson was far more aggressive in the fight.

Neal’s aggression should help here against Magny, who is not a high-output fighter. Neal’s takedown defense could be tested here, especially against the longer Magny, who has a big size and reach advantage in the small Octagon. It’s a tough fight to call.

Have we finally found somebody that Donald Cerrone can beat? The fan favorite known as Cowboy has lost five in a row. His loss to Niko Price was overturned and ruled a no contest because of a positive pot test for the winner. Cerrone is basically a celebrity at this point. He’s a guy used to put fighters over and to draw attention because he’ll be aggressive to the point of making himself vulnerable.

Everybody knows all of this, yet Cerrone is a -170 favorite here. It’s a wonder this fight wasn’t put on next week’s Texas card so that he could get the fans fired up once again. I don’t know how many fights are left for Cerrone, but I know what this one says about Alex Morono. Morono, who went 1-2 in 2020, must be a lamb led to slaughter here so that Cerrone can actually get a win and end his streak. Nothing about this fight sounds fun or interesting.

Rumor has it that Dana White is trying to abolish the women’s flyweight division, as the talent pool has simply thinned out too much. For now, this is a flyweight main event between Michelle Waterson and Marina Rodriguez. Rodriguez, who rebounded from a draw against Cynthia Calvillo and a loss to Carla Esparza with a win over Amanda Ribas, is the big favorite in this fight.

She’s the bigger, longer fighter in the smaller cage. She’s never lost via stoppage. Waterson has four losses via stoppage. However, Waterson has gone the distance in each of her last seven fights. In other words, Waterson wins one way and that is by decision. Rodriguez could potentially win any number of ways. The decision to make here is Rodriguez -208 or over 4.5 at -210, just in case Waterson does enough to win. It would be a shocker if this doesn’t go the distance.