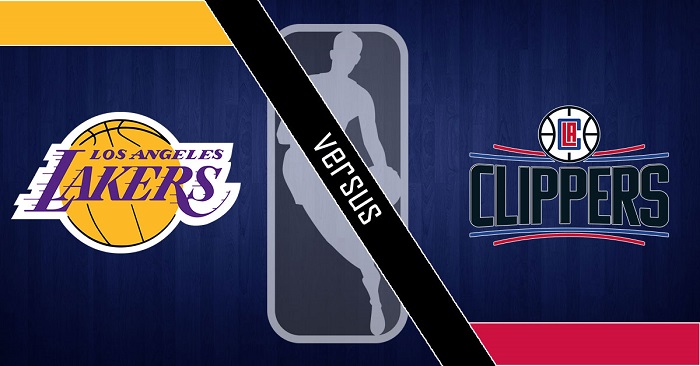 The Los Angeles Lakers and the Los Angeles Clippers are roommates at the Staples Center, but one team has to be designated the home squad when the two teams meet. It isn’t like MLB or NHL where home field or home ice is a competitive advantage with the last chance at the plate or the last line change.

In any event, the Clippers have been designated the home team for this one and the Lakers will technically be the road team as TNT carries the Battle of Los Angeles as the second game of its doubleheader. The Clippers are favored by eight points with a total of 211 per the odds at Bookmaker Sportsbook.

Let’s dig into both sides and find a play in this one.

If that line looks too high to you, keep in mind that LeBron James will not be playing. His return from a high ankle sprain hasn’t gone all that smoothly and with the playoffs on the horizon, the Lakers will err on the side of caution. LBJ will be sidelined, but the rest of the Lakers should be on the floor, as this isn’t a back-to-back or anything like that.

LeBron’s criticism of the play-in tournament may push his teammates to play a little bit harder in his absence. It worked on Monday when the Lakers edged out the Denver Nuggets 93-89 with a huge defensive effort to stay above the cut line for that tournament where the #7 plays the #8 and the loser of that game plays the winner of the #9 vs. #10 game in hopes of making it into a best-of-seven round.

The Lakers had lost six of seven, including the two games with LeBron prior to that win over Denver. James had 19 points in the loss to Toronto and 16 points in the loss to the Kings. The Lakers are just 2-5 since Anthony Davis returned. He has taken some time to get back into rhythm as well, but his 25 points against the Nuggets were very much needed in that victory. It was the second-most he had scored since leaving the Valentine’s Day game against Denver injured.

Los Angeles has lost both games to their roommates, so maybe they’ve had to do some extra chores or something as a result. Their chances of salvaging one of the regular season meetings would increase if Andre Drummond could be more effective on offense. He had four points and zero rebounds in 22 minutes on Monday in a back-to-back effort.

Looking at the full-season numbers for the Lakers is hard because LeBron and AD mean so much. Early in the year, Los Angeles looked pretty unbeatable, but they have looked anything but since.

The status of several players for the Clippers always seems to be in doubt as well. Kawhi Leonard has played the last two games and only scored 29 points in 63 minutes, but at least he’s been out there. It does look like they are trying to round into form now, though. Serge Ibaka remains sidelined with a back injury, but Paul George and Kawhi Leonard should play pretty frequently down the stretch.

George had 22 points in the win over Toronto that snapped a three-game skid for the Clippers. They had won eight of nine before losing to the Pelicans, Suns, and then Nuggets in the first game back from a four-game road trip. Marcus Morris also had 22 in the win, as he has stepped up a lot lately with over 16 points per game in April and 15 points per game in his two May showings.

The Clippers rank third in the NBA in NetRtg and second in eFG% offense, trailing only the Brooklyn Nets. They’re also a top-10 defensive squad per eFG%. They are far and away the best three-point shooting team in the NBA at 41.7%, but only rank 14th in percentage of field goal attempts from beyond the arc. They are just 18th in 2P%, so that will need to change heading into the playoffs.

How much does this game matter to the Clippers? They’ve already clinched a playoff spot and it looks as though they can only move down and not really move up, seeing as how they are 4.5 games behind Utah and still 3.5 behind Phoenix for second place. Does beating the Lakers and pushing LeBron & Co. a step closer to that play-in tournament matter?

Tough game to handicap here with missing pieces and questionable motivations. Perhaps that brings the over into play. Games that don’t have a lot of stake can be a lot more wide-open. The Lakers gave a huge defensive effort on Monday, but had allowed at least 110 points in each of the previous three games to the Raptors, Kings, and Wizards.

The Clippers should get an offensive bump with Kawhi back and should be a lot more focused on smoothing out the rough edges on that end of the floor.