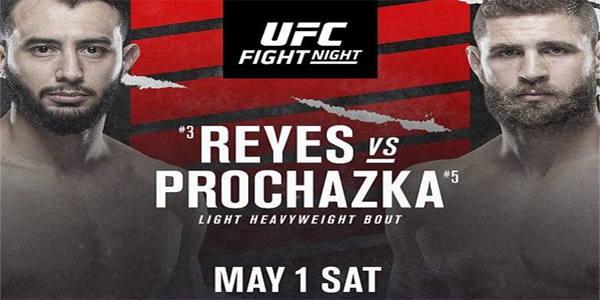 After a successful and spectacular pay-per-view card in front of a full complement of fans in Jacksonville, Dana White and the UFC head back to the UFC Apex training facility for this week’s UFC on ESPN 23 card with a main event of Dominick Reyes and Jiri Prochazka.

There were some questions as to whether or not White may host another event in Florida or maybe move one to Texas, but the event is at the Apex and will go down as UFC Vegas 25 in this historic and frustrating time. The next three Fight Night cards are at the Apex, with UFC 262 at the Toyota Center in Houston sandwiched in there.

Twelve fights are on the betting board for this one on Saturday May 1 and we’ll use the odds from BetOnline Sportsbook to see what’s up.

Felipe Colares will try to break even on his first UFC contract in this matchup against Luke Sanders. Colares is 1-2 with a split-decision win over Domingo Pilarte and losses to Montel Jackson and Geraldo de Freitas by unanimous decision. Sanders, a longtime UFC fixture, returned from an 21-month layoff to lose to Nate Maness back in November by submission. The 35-year-old is a more aggressive fighter than Colares and the small Apex Octagon could play a role. I like Sanders to hold serve as a favorite.

KB Bhullar will look for his first career UFC win when he takes on Andreas Michailidis at 185 pounds on Saturday. Bhullar was 8-0 before making the leap to UFC, where he lost to Tom Breese by first-round knockout in his debut fight. It was his first fight in over a year, so maybe that played a role. Michailidis is also 0-1 with a KO loss in his UFC career that came at the hands of Modestas Bukauskas back in July. This honestly seems like a big number for Michailidis, who hasn’t done anything that stands out more than what Bhullar has done. The dog is worth a look here.

The first of three women’s fights on the card features a big favorite in Loma Lookboonmee against Sam Hughes. Hughes has lost to the two best opponents she has faced. She lost to Vanessa Demopoulos last July in her first title fight and then lost to Tecia Torres by doctor’s stoppage in December. While Lookboonmee is only 2-1 in UFC and 5-2 overall, Hughes hasn’t done anything to warrant consideration here, even if she has a big size advantage in the fight. That said, -400 is a stiff price to pay.

After a winless 2020, TJ Brown is hoping to get back in the win column to start 2021. He’ll draw in against Kai Kamaka III in this featherweight fight. Brown got a contract from his Dana White Contender Series win over Dylan Lockard, but has disappointed since. Kamaka paid his dues in KOTC, Bellator, and LFA before getting his shot with a triumphant win over Tony Kelley. Unfortunately, a setback against Jonathan Pearce right after Thanksgiving has lowered his perception a bit. He was getting soundly beaten and dominated in that fight before eventually getting knocked out for the second time in his career.

This looks like a tough fight to bet, as Kamaka basically only wins by decision and the total is heavily juiced to the over. Most of Brown’s fights have ended in stoppages.

Jonathan Pearce, who put that beatdown on Kamaka, is up next against Gabriel Benitez. This is the third fight of Pearce’s contract and he’s 1-1 to this point with a loss to Joe Lauzon, but that emphatic win over Kamaka. Pearce is the bigger, rangier fighter here at six feet tall against the 5-foot-8 Benitez, but the smaller guy is the large favorite at -200. The ground game should be the difference here for Benitez. Pearce had takedown defense issues in the fight with Kamaka and Benitez has a much more polished ground game. He also has a lot of paths to victory with eight finishes, including one last time out.

The -200 price is a little bit big in some respects, but as a straight wager or a parlay piece, Benitez looks like a good one here.

Things have not gone well of late for Randa Markos. She now has a losing record after her unanimous decision loss in November to Kanako Murata to fall to 10-11-1. She’ll try to get back to .500 here against Luana Pinheiro, a 28-year-old prospect making the leap up from the Contender Series. In her first fight in 361 days, she beat Stephanie Frausto to get a contract and her only career loss was an iffy split decision more than four years ago in her only AF fight.

The -160 price looks cheap here. While Markos is more experienced with a better list of opponents, she’s clearly finished in the UFC. Pinheiro is being gifted this matchup as a chance to get that first win and make some noise in a strawweight division that needs it. She’s a good parlay piece with Benitez.

The women stay in the spotlight as the main card begins with Luana Carolina against Poliana Botelho. Carolina suffered her first UFC setback last July against Ariane Lipski in a submission loss. It seems like the type of loss that rocked market confidence in her because it was her first stoppage loss and also just an uncompetitive performance after a nice win over Priscila Cachoeira. The 27-year-old had won six in a row prior to that.

Botelho has lost two of her last three, but still gets the benefit of the doubt as the big favorite here. She lost back in October to Gillian Robertson after 18 months away from the Octagon. Was it the layoff or was it something more for Botelho, who turned 32 a couple months after that fight? I’m not sure, but one thing I am looking at here is the under 2.5 at +240 in this bout. Botelho has six career knockout wins. Carolina only has three stoppage wins out of six career victories, but she’s shown some good striking ability in her two UFC wins. It seems like a better gamble than a side here.

Cody Stamann accepted a very fast turnaround to fight Jimmie Rivera in July. It went as expected, as Stamann lost by unanimous decision. His win over Brian Kelleher was very emotional after the death of his brother and the quick turnaround proved to be too much. He should be in better physical, mental, and emotional shape here against Merab Dvalishvili, but still finds himself lined as a big underdog in the fight.

There isn’t anything overly exciting about Dvalishvili, who has won five straight, all by decision. He lost his first two UFC fights, but has rattled off five in a row now, including three in 2020. This is probably a better fight than the line suggests, as Stamann only has three losses and a draw to go with 19 wins, but Dvalishvili is 11-2 in his last 13 fights. He’s the pick here and maybe part of an open parlay or a parlay piece with Benitez and/or Pinheiro.

Krzysztof Jotko is back at it nearly one year removed from his win over Eryk Anders on May 16, 2020. Jotko has won three in a row to get back on track after a couple KO losses in 2017 and 2018. He doesn’t fight often, but when he does, there seems to be a lot of intrigue to his fights. The thing about the Anders win is that it doesn’t garner a lot of respect, as evidenced by this line.

It doesn’t hurt that Sean Strickland won two fights in impressive fashion at the tail end of 2020. His win over Jack Marshman came after nearly a two-year layoff and he won two weeks later over Branden Allen. Strickland showed that he still has a lot of quicks in that fight against Allen, especially with such a fast turnaround. None of his losses are particularly bad and he has a higher ceiling than Jotko. The -260 price is fairly cost-prohibitive here, but this feels like a chalky card.

Dustin Jacoby has been a solid addition to the UFC roster. Jacoby actually made a couple appearances in 2011 and 2012 and lost in those UFC fights, but got another chance at redemption in August when he beat Ty Flores to secure a contract on the Contender Series. He’s won both fights since, with victories over Justin Ledet and Maxim Grishin. He’ll be drawing a really tough opponent here in Ion Cutelaba, but the reasonable line suggests that he’s gotten some helium with four straight wins, three of which have come under the UFC umbrella.

It doesn’t hurt that Cutelaba has struggled. He lost both 2020 fights to Magomed Ankalaev and also suffered a loss against Glover Teixeira in 2019. The thing about the Ankalaev losses is that he has been dominant. Those are less of a reflection on Cutelaba and more of a reflection on just how good Ankalev has been. Jacoby, while a great story, is not on Ankalaev’s level. This feels like a good bounce back spot for Cutelaba. If it isn’t, we can reassess. But I’m looking chalk again here.

An underdog has to win at some point on this card, but I’m having a really hard time finding one. Maybe this will be the one. Giga Chikadze puts his seven-fight winning streak on the line against Cub Swanson. The 32-year-old scored a nice KO win over Jamey Simmons on the heels of four straight decision wins, two of which were split. While Chikadze has done what it takes to win, his fight against Simmons, which was on short notice against a UFC debutant, was the first time we really saw the striking power that gave him five knockouts before getting to UFC.

Cub Swanson is 37. His best days are in the past. At least he’s been back in the win column in his last two fights, but Kron Gracie and Daniel Pineda are not fighters that move the needle a ton. On the other hand, this will be Chikadze’s first fight against a highly experienced opponent with the cage IQ of Swanson. That could be problematic for a guy that hasn’t shown much finishing ability of late. I don’t love this pick, but Swanson’s +133 price is probably the better of the two sides.

The main event of the evening comes from the light heavyweight division, where Dominick Reyes and Jiri Prochazka get together. Reyes has lost his last two fights, but he’s fought Jan Blachowicz and Jon Jones in those fights, so this looks a lot easier by comparison.

Prochazka was a star in Rizin FF for a long time and even the champion over former UFC champ CB Dollaway. His UFC debut was a spectacular one with a knockout over Volkan Oezdemir. Prochazka showcased all of his striking ability in that second round. Reyes also has a win over Oezdemir, but by split decision. You have a lot to unpack with this fight. Reyes has been challenged by the best the division has to offer. Prochazka took a long time to make the UFC leap and ultimately did so during the pandemic, so we’ve only seen one fight from him.

The main event looks to be far and away the best fight on otherwise lackluster card, but also one of the toughest to bet. Reyes has only been finished once, but we have a low total here. Rather than flip a coin on the winner, over 1.5 looks like the bet. Reyes should have a smart, patient gameplan here.