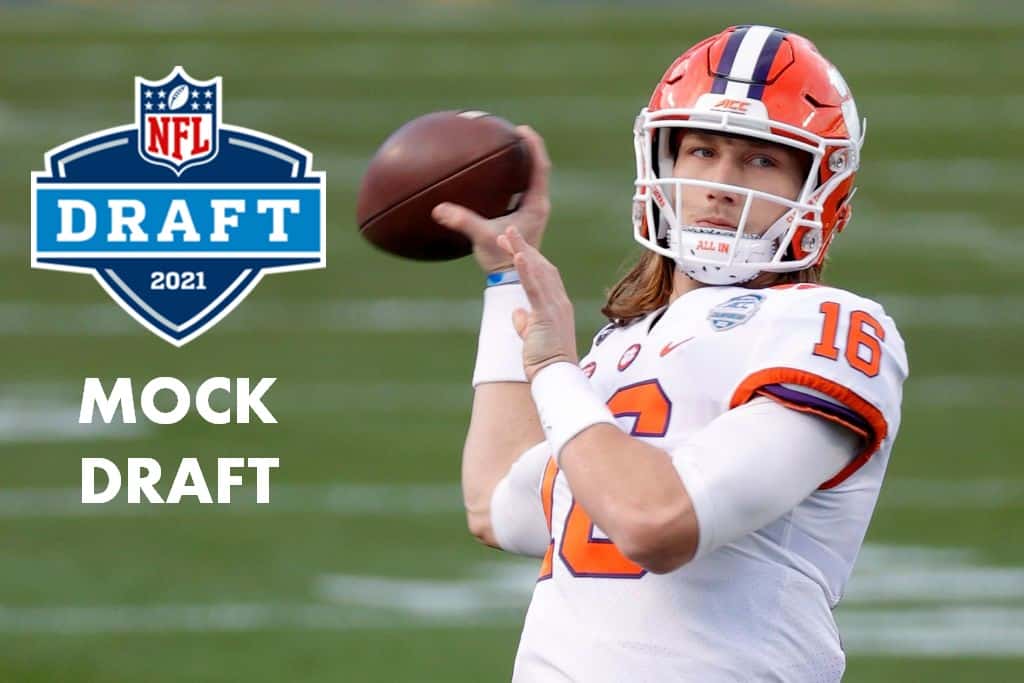 The $5,000 NFL Mini-Mock Draft, which you can enter at BetOnline, is something that intrigues me.

Naturally it’s a chance to predict something, but there is also that bit of uncertainty almost to the last minute. It’s almost as if you were trying to pick the winner of a football game and you didn’t know who was going to be the quarterback for either team.

Still, we are taking our shot. And maybe this can help you be a winner, whether you’re going to follow it or fade it. Either way, you can earn your share of a $500 first prize. Go check out the BetOnline site (“Contests”) for all the rules and regulations (we promise, there aren’t many).

Okay, this one is a no-brainer. I’m real interested to see whether coach Urban Meyer, whose background is completely in the college game, will tailor his offense to meet Lawrence’s talents, or more or less impose an offense upon him.

Wilson is said to be very good throwing on the run and in throwing through tight windows. He stood out for BYU against a schedule that was not as challenging as it might otherwise have been. The Jets also have the 23rd pick.It will be interesting to see if they take an offensive lineman to go opposite Mekhi Becton at the other tackle spot.

No, he’s not a scrambler, but he can throw the ball down the field – 64% when he was tossing it at least 30 yards. Of course, what the Niners decide to do about Jimmy Garoppolo remains to be seen.

Here’s the tricky one. Quarterback is not necessarily a “need” area for the Falcons. But Lance is viewed as someone who can be the heir apparent to Matt Ryan. That may or may not turn out to be the right move for them.

A lot of teams are enthralled with Lance, who threw 28 touchdowns without an interception and ran for 15 more TD’s in his only full season as a starter at North Dakota State (the same school that produced Carson Wentz).

Yup, he’s an athlete; various Division I (FBS) programs recruited him as a safety, linebacker or wide receiver.

My philosophy here is that even if the Falcons trade out of this pick, it will be to a team that is interested in drafting Lance. At BetOnline, the Falcons are priced at +170 to trade this pick and -200 to keep it.

The Bengals are another team that is hit with a decision – do they want to make a move in the way of protecting Joe Burrow, who had to run for his life most of the time, or do they want to re-connect him with one of his star receivers at LSU?

That would mean a choice between Penei Sewell of Oregon and Chase.

I think they’ll go for the latter, in the way of accommodating him, and look for offensive line help later.

Yes, the Bengals have Tyler Boyd and Tee Higgins .But in the division they’re in (the AFC North), they need more to compete. Putting more pieces around 2020’s #1 overall choice takes a step in that direction.

Sure, the Dolphins might be tempted to take Jaylen Waddle, one of Tua Tagovailoa’s receivers from Alabama. And tight end is not a position of need. But Pitts will give them a lot of flexibility because he can split out wide and is a great complement to Mike Gesicki in the passing game. Head coach Brian Flores came from New England, where they made a living from two-tight end sets for a while.

Remember that when Waddle was healthy, he was the #1 receiver at Alabama ahead of Devonta Smith. This guy is explosive; a lot of the people evaluating this thing have made comparisons to Tyreek Hill, who is about the most dangerous receiver in the game. And like Hill, Waddle can be a real factor in the return game as well. At BetOnline, he is +600 to be the first wide receiver off the board (if you’re so bold).

Face it – Jared Goff is going to need all the help he can get.

It is true that this team can go in a few directions here. They have a lot of needs. But if they are going to be able to find out what Sam Darnold can do, they need to keep his jersey clean.

Sewell won the Outland Trophy when he was just a sophomore. He is thought to be a future All-Pro by a lot of people, and should probably deserve to be taken much higher than this.

But there are doubters too. One NFL scout (anonymous of course) says, “Name one pass rusher he actually played against in the Pac-12 who’s on a draft board.”

So maybe it will be a surprise to the Broncos that they could pick Justin Fields here if they want. But would they want that?

Horn provides a guy with great speed (4.37 in the 40) and has other great measurables. He is physical and very adept at preventing separation. He is the kind of corner Vic Fangio wants in his defense.

From everything people are saying, the dilemma for the Cowboys was in choosing between the aforementioned Horn and Surtain, as they seem dead set on addressing an issue at cornerback.

Well, in this mock, the Broncos have made that choice for them. But it could be that Jerry Jones and his staff had preferred Surtain all along.

Alternatively, Dallas could take a long look at Micah Parsons, the linebacker from Penn State, who has red flags but also a 4.39 time in the 40, and a chance to be the most impactful non-QB in the draft.

But what the hell do I know?

Remember, BetOnline not only has a very comprehensive selection of props available on the NFL Draft, they also have contests you can participate in – the $5,000 Draft Predictor and the $5,000 Mini-Mock Draft……… And it is easy to get started – they leave no stone unturned when it comes to payment options, and that includes cryptocurrencies like Bitcoin!