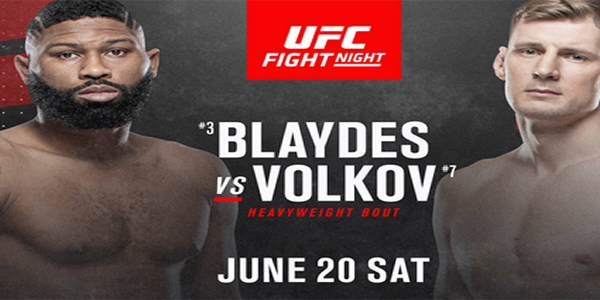 We’ll break down Saturday’s card here with a main event between Curtis Blaydes and Alexander Volkov in the heavyweight division. There are 12 fights scheduled for the card, including four women’s fights, so this one will have something for everyone.

We will take our odds from 5Dimes Sportsbook this week as we touch on each bout and pay a little extra attention to the main card scraps.

UFC newcomer Max Rohskopf is a big -185 favorite for his fight against Austin Hubbard in the lightweight division. Hubbard was the LFA champ back in December 2018, but has gone just 1-2 in his three UFC fights. It has been a tumultuous stint in UFC, as he beat Kyle Propolec, but suffered from compartment syndrome and had to be hospitalized after the fight. He returned at UFC 248 in March and lost to Mark O. Madsen. Rohskopf has five wins, all by submission, across three different promotions. The 25-year-old looks like something of a prospect and should start with a win, likely by sub.

Roxanne Modafferi and Lauren Murphy square off in the first women’s fight on the card at 125 pounds. Modafferi is the -120 favorite in her 42nd professional fight. She scored a big upset win over Maycee Barber at UFC 246 the last time we saw her, but there doesn’t seem to be much recency bias in the fight. Barber tore her ACL in that fight and it certainly had an impact, but Modafferi was likely winning the fight to begin with. Murphy, who has eight knockout wins in her career, has won her last two fights. At +100, she could be a sneaky pick here against those that may overvalue Modafferi’s most recent win.

Another lightweight fight takes center stage in the smaller APEX Octagon between Matt Frevola and Frank Camacho. Frevola is -125 with +105 on the return for Camacho. Camacho has dropped three of his last four fights, two of them by stoppage. He did knock out Nick Hein, but lost to the better fighters that he faced in Beneil Dariush, Geoff Neal, and Drew Dober. Frevola has found a way to win his last two fights, both by decision. This contrast of styles makes for a tough handicap, as the line implies. The smaller cage dimensions may help Camacho here, so he gets the slight nod at the plus price.

Next up in the women’s division are Cortney Casey and Gillian Robertson, also at 125 pounds. Casey scored a really nice win over Maria Romero Borella by first-round submission last time out, which snapped a string of six straight decisions in which she went 2-4. Robertson’s most recent loss was against Maycee Barber, but outside of that fight, she hasn’t really faced the same level of competition that Casey has. Robertson is -120, but, again, this looks like a fight with a nod to the slight dog.

Middleweights Marc-Andre Barriault and Oskar Piechota are next on the card with the fight lined in favor of Piechota at -125. Once again, another toss-up type of fight, as Barriault looks to end a three-fight losing streak. The former TKO champ has yet to win since joining the UFC. In other words, this could be a really big fight for him. His knockout power from TKO has disappeared, with each of his last three fights going all 15 minutes. Piechota has also dropped three straight and all by stoppage. He was 11-0-1 prior to his loss to Gerald Meerschaert and he has never been able to rebound from it. The best play here is probably the over 2.5 at +110, given that neither guy has shown much striking power of late.

Brianna Van Buren is the biggest favorite on the card to this point at -190, as she ushers in a string of big favorites for the next few fights. The hot prospect in Invicta won her UFC debut over Livinha Souza back in July, but she does step up in class a bit here. Tecia Torres has lost four straight, all by unanimous decision, but she has been a UFC fixture for a while. It may simply be that she has peaked and has gotten as far as she is going to go, but losses to Jessica Andrade, Joanna Jedrzejczyk, Zhang Weili, and Marina Rodriguez are really not that bad. Three of them have been champions and Zhang is the current champion. Torres at +165 is worth a stab here. This is a big step down.

Bobby Green is -235 for his lightweight fight against Clay Guida. Green has dropped two in a row and only has one win in his last five fights. Guida will have to shake off a 10-month layoff here and the 38-year-old has lost two of his last three. It is incredibly hard to lay the -235 with Green here, given how uninspiring his recent performances have been. Guida is 38, however, and seems to be very much on the backside of his career at this point. Either way, this is not a fight I’d have a ton of interest in.

Jim Miller is making his 46th professional MMA appearance. This is the 12th for Roosevelt Roberts. This is a really important fight for the 26-year-old because he gets a chance to beat a big-name opponent that has not appeared to be as far over the hill as some of the other over-35 fighters. Miller did lose his most recent fight to Scott Holtzman by unanimous decision in a similar situation against a rising fighter.

Holtzman was far more active and far more aggressive. That will be a problem Miller has to fix here. The longer, lankier Roberts, is stepping up from his May 30 fight against Brok Weaver, but he’s able to come back on short notice here because of how little he was hit in that match. Miller often has the better ground game in his fights, but that may not be the case here against Roberts. This feels like a fight that could be a turning point for Roberts, hence the short-notice turnaround and the spot on the main card.

Lyman was in fact Good in his return from losing to Damian Maia with a knockout win over Chance Recountre. He’ll be making his first fight since testing positive for coronavirus back in April. Good has had some long layoffs between fights in his career and this is another one at more than eight months. Staying sharp appears to have been an issue at times, but he also lost to Maia with his quickest return time of just three months. Maybe rest is good for him. He’ll have to hope so because he draws a tough competitor here in Belal Muhammad, who only has three losses to his name.

Muhammad fought three times in 2019, with a loss to Geoff Neal and wins over Curtis Millender and Takashi Sato. The difference in this fight could very well be Muhammad’s ground game, which is a little bit stronger at this stage in the careers of both guys. They both like to stand and throw, but the total over 2.5 implies here that Muhammad will dictate the tempo of the fight, seeing as how four of the last five for Good have ended in finishes. If that’s the case, Muhammad will likely win.

What do we get out of Raquel Pennington in this fight against Marion Reneau? Pennington may be the hardest fighter in any women’s division to figure out. Remember when she took GOAT Amanda Nunes into the fifth round at UFC 224? She’s also struggled through fights against Holly Holm, Irene Aldana, and Germaine de Randamie.

Here she faces 42-year-old Marion Reneau on a 15-month layoff, so the stage is set for her to have a big performance and come away with a win. Quite frankly, she should. Reneau has not looked the part in her last two fights, losses to Cat Zingano and Yana Kunitskaya. Pennington has no excuses here. The -165 price looks light, but it is easy to see why bettors and oddsmakers would be timid regarding some of her past efforts.

The only featherweight fight on the card should be a good one between Josh Emmett and Shane Burgos. Emmett beat up Mirsad Bektic last July with an impressive first-round knockout win. Burgos is 13-1 in his career and his lone loss came via knockout against Calvin Kattar more than two years ago.

You have to appreciate Emmett’s kill or be killed style in these fights. His last four have all ended in KO fashion, three of them in his favor. His lone loss came against Jeremy Stephens. It seems like something changed for the 35-year-old scrapper a couple of years ago and he decided to be more aggressive. So far, it has worked. Will it work here?

Burgos has 10 stoppage wins in his career out of his 13 victories. He has a huge size edge here with five inches of height and reach on his opponent and he is a significant striker. Emmett’s chin will undoubtedly be put to the test here.

It would seem to be a big reason why Blaydes is such a favorite over Volkov here. Though Blaydes has never won by submission, he has a strong ground-and-pound game. At this stage of his career, Blaydes only has two losses and both have come against Francis Ngannou. Otherwise, his card is clean. He beat Adam Milstead, but a positive marijuana test took away that win.

Volkov is not a patsy by any means. He just beat Greg Hardy last time out, as he outlasted the former NFLer. That was his key to victory and he did it to perfection. This fight, however, comes against a more polished opponent in Blaydes. A classically-trained fighter. The big favorite should hold up here, as Blaydes only has one Achilles heel and it isn’t Volkov.