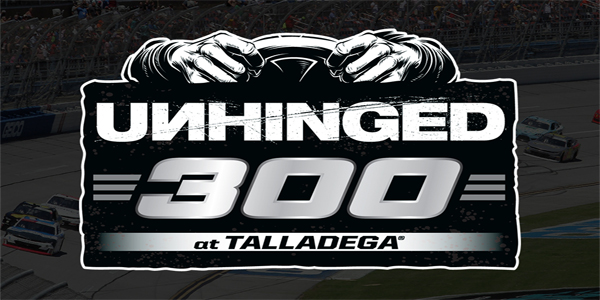 It doesn’t seem like we talk enough about bad beats on the race track, but Xfinity Series bettors were treated to a couple of gems last week. Noah Gragson won Stage 2 and led the most laps in both races at Homestead-Miami and failed to win either one. Harrison Burton won on Saturday and Chase Briscoe won on Sunday.

We’ll see if Gragson can snag that elusive third win of the season this week at Talladega Superspeedway in the Unhinged 300. Admittedly, something that I missed is that we’re in the midst of the Dash 4 Cash races for the Xfinity Series, so the drivers have some extra incentive to win, which makes Gragson’s tough losses hurt that much more.

This is the third of the four Dash 4 Cash events. As you would expect with Talladega, the odds for the favorites have been depressed a bit and the odds for the middle group have also been impacted. This is technically no longer a restrictor plate race, as a tapered spacer is being used in lieu of the restrictor plate, but for all intents and purposes, it is the same concept.

With that in mind, here are the odds for the Unhinged 300 from 5Dimes Sportsbook:

This will be a long grind for the drivers after running twice last week at Homestead-Miami. The 2.66-mile loop at Talladega is a long one. This winds up being 300.58 miles if extra laps are not required for overtime. It will also be quite a bit hotter in Lincoln, Alabama than normal with the race date moved from late April to June 20.

As you can clearly see, the odds get a facelift with a race like this. Chase Briscoe, Justin Allgaier, Noah Gragson, and Ross Chastain are all priced at +770. The next tier of drivers is Austin Cindric, Justin Haley, AJ Allmendinger, Harrison Burton, and Brandon Jones, with the first three at +1100 and the last two at +1200.

Through 10 events, Gragson, Briscoe, and Burton have combined for seven wins. Jones, Allmendinger, and Kyle Busch have the others. Allmendinger has only run in three races, but he has a win and will likely have enough points to steal a playoff spot if he keeps running regularly or at least semi-regularly.

Gragson won the season-opening race at Daytona and has finished in the top five in seven of the 11 races, so he is very much deserving of being a co-favorite. Allgaier has four stage wins, but only two top-five finishes. It seems like he is overpriced week after week and if you’ve found some Xfinity Series matchups, you’ve made good money fading him. Perhaps that changes this week, but you can see why some would believe he isn’t on that same level as Gragson and Briscoe.

Chastain is another interesting one to be up that high, given that he only has two top-five finishes this season.

That means we need to take a closer look at how these guys have done at Talladega. This is only a once-a-year stop for the Xfinity Series, so we have much smaller sample sizes for these guys, plus there are a lot of relative newbies to the Xfinity Series with only one or two attempts at this track.

As such, we look at Allgaier, who returned to the Xfinity Series in 2016 and has four data points here. He’s been second, eighth, third, and 28th, but he led the most laps back in 2017 when he finished eighth. That is why he is listed among the favorites. That being said, despite the JR Motorsports backing and the experience, he only has one win in his last 51 Xfinity Series races. He’s had a lot of top-five finishes, but only the one victory.

Jones is an elder statesman at this point in the Xfinity Series at 23 with 147 races under his belt. He was the runner-up at Talladega in 2018 and led the most laps in 2016 before finishing 18th. He only has two Xfinity Series wins out of all of those races, so it would be tough to trust him this week or any week.

Chastain has four Xfinity Series starts here and hasn’t finished higher than 16th. He has run a little better at Daytona, including last year’s win in the summer race. That is why he’s getting so much respect on his name this week.

Briscoe has two starts here and has finished 16th and fourth. Cindric also has two and has finished 30th and fifth. Rookie Burton ran a smattering of races last year, but none of them included Talladega.

The obvious one with sample size here is Allmendinger. He finished fifth in the Cup Series in 2014, but had a lot of pedestrian efforts otherwise. This will be his first Xfinity Series start at Talladega. For a guy that had one win and 57 top-10 finishes in 371 Cup Series races, he sure has milked a long stock car career out of things. He does have four wins in 19 Xfinity Series races.

That is the million dollar question here. The winners the last four years in this race are Elliott Sadler, Aric Almirola, Spencer Gallagher, and Tyler Reddick, so pretty much all over the map. Brennan Poole actually looked like the winner in 2016, but Sadler was ahead when a last-lap caution came out during the overtime finish.

We don’t have a lot of Talla-data, if you will, to go off of with the current crop of Xfinity Series drivers and especially the top guys. We have some Daytona data, but not much and the two races are indeed different.

Based on what we’ve seen so far, there is a big gap between the “haves” and the “have-nots” given the winners and all the stage points. It sure seems like Burton, who only has 58 stage points, has gotten very fortunate to be where he is in third place. The others in the top five have 122, 106, 119, and 112 stage points. Maybe that makes him something of a fade candidate.

Maybe this is the week for Allgaier, but it won’t be with a ticket from me. He’ll have to prove he can get another win first. To sit fourth in stage points and eighth in points overall speaks to the issues that he has had late in races.

Forced to pick somebody here, Brandon Jones gets the nod at +1200. He ran extremely well on the big track at Auto Club Speedway with two stage wins and the most laps led. He’s been pretty consistent overall and has had two pretty strong runs at the Superspeedway in the past.