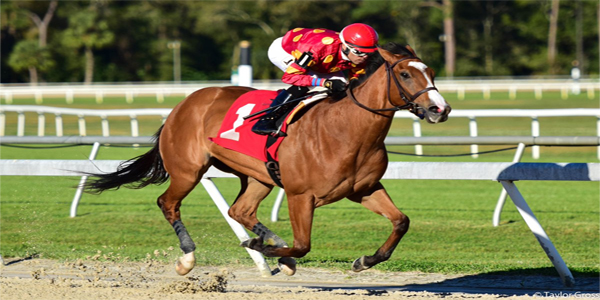 Race 8 on Belmont Stakes Saturday is for the girls. The three-year-old fillies will run a mile in the 2020 Acorn Stakes, part of the American Triple Tiara of Thoroughbred Racing. The others are the Coaching Club American Oaks and the Alabama Stakes.

Typically, the Acorn Stakes follows the Kentucky Oaks and the Black-Eyed Susan Stakes, but COVID-19 postponements and cancellations have made a mess of the horse racing calendar. As such, this will be the first of those three races, with the others coming in September and October.

Seven fillies are in the field this year with a $150,000 purse in this Grade 1 event, with a purse cut in half, like so many we’ve seen at tracks across the country without spectators. We’ve already taken a look at the Belmont Stakes and encourage you to check out that preview, but now the fillies take center stage.

Here are the post positions, horses, trainers, jockeys, and morning line odds for the 2020 Acorn Stakes:

Gamine and Casual are the top two choices on the board, even though neither horse raced as a two-year-old. Both horses are 2-for-2 this season, with Gamine the only one that has gone at least a mile.

Perfect Alibi is coming off of a seven-month layoff, but is still given a fair chance to win the race for trainer Mark Casse. She was fourth in the Breeders Cup Juvenile Fillies at Santa Anita last year and is back at Belmont for the first time since running second in the Astoria back in June.

Lucrezia is the most-tested of the fillies and sits at 9/2.

We’ll take a look at all seven horses and put together a $20 Bet Slip for the race:

Three-year-old offspring of Into Mischief have done really well this season and here is one expected to have a big effort in the Acorn Stakes. She is 2-for-2 with a maiden win and a $100,000 optional claiming at Oaklawn Park back on May 2. That was the day of the Arkansas Derby and she won by a neck over Speech in an 11-horse field. In both of her races, she has been the pacesetter and she’s had some quality workouts heading into this one.

As you would expect with a heavyweight tandem of Bob Baffert and John Velazquez, expectations are very high for this horse. Her 98 speed figure in that optional claiming was quite a bit better than her first performance in a very weak field, a race that she won by 6 1/4 lengths. With a good team, a good trainer, and a great sire, she is a deserving favorite.

Lucrezia finished second to Ken McPeek’s Swiss Skydiver in the Gulfstream Park Oaks back on March 28 and has not raced since. That was her second race with Julien Leparoux, as the tandem rode to a maiden win on turf as the favorite back on October 23. Since then, Lucrezia has a couple of impressive dirt wins in the Sandpiper and the Suncoast.

She is scaling back the distance a little bit here from the 1 1/16 miles she ran in the GP Oaks. The daughter of Into Mischief has had some excellent workout times recently and seems to have turned the corner as a three-year-old with her best career speed figure and a tie with her showing in that maiden victory. She is an early stalker, but has shown good speed late.

The team of Rudy R. Rodriguez and Jorge A. Vargas Jr. will be reunited for the third time with Water White. She was a winner last time out in the Busher Invitational at one mile at Aqueduct before everything got shut down. She is actually a two-time winner, but a fifth-place showing with a career-best speed figure of 90 in the Demoiselle at Aqueduct doesn’t inspire a whole lot of confidence. She has not run since March 7 and doesn’t have the same connections as others in the field.

Steve Asmussen turns to his most trusted rider here in Ricardo Santana Jr. with Casual. The duo has gone 2-for-2 with a maiden win and an optional claiming win, both in decent-sized fields of 10 and 11. Casual posted speed figures of 97 and 96 in those two runs, one at Oaklawn and one at Churchill Downs. The daughter of Curlin and Lady Tak is stepping up in class here. The board from her previous two races went on to struggle in their next events.

She’s also adding some distance here. With Curlin in the bloodline, that may not necessarily be a problem. Had her last race been longer, she would have won going away, but against weak competition. This field, while not great, is certainly a lot stronger.

This is an interesting team, but possibly with an uninteresting horse. The daughter of Constitution by Tapit is a really nice start to a bloodline. We’ve seen three wins from Glass Ceiling so far, but a seventh in the Demoiselle is not a good sign here. That being said, Gargan took over just before the Demoiselle and has seen increased speed figures in the races since taking over, including back-to-back wins at Aqueduct and Gulfstream.

It is entirely possible that as a more experienced three-year-old, Glass Ceiling is starting to make some moves. She’s coming off of her best career speed figure and has a very good rider in Joel Rosario.

The tandem of Barclay Tagg and Manny Franco has a much better shot in the Belmont Stakes with Tiz the Law. Pleasant Orb is a fine horse that will win some undercard races at bigger meets throughout the summer, but she doesn’t have it here. Her speed figures, unless she is sitting on a speed ball run, are not in line with the others in the field. She was a distant third in the Hollywood Wildcat behind Tonalist’s Shape, who was subsequently awful in the Gulfstream Park Oaks.

Perfect Alibi has won three of her six races, but has not shown any consistency. She also hasn’t raced in seven months, so nobody quite knows what to expect here. She is a bad starter and maybe the most accomplished closer in the race, so long as she isn’t going up against British Idiom.

The rider is good here and we know what Casse has accomplished in these big races. We just don’t know if we have the horse. The workouts have been uninspiring as a whole and it has been seven months since Perfect Alibi ran a race.

What a mess. Gamine is a worthwhile favorite for a variety of reasons, but is also largely untested. Lucrezia has been tested and has popped off two of her best speed figures in her last two races. If she repeats her Gulfstream Park Oaks effort, she can win this race and probably wouldn’t need more than that.

Casual is the only other one that seems capable of crashing the party for those two. She is pretty untested, but has speed figures that put her in contention to win this race.