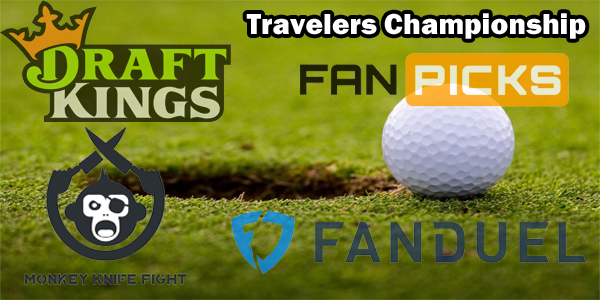 Golf is a saving grace for both the DFS and betting communities to say the least right now. Gamblers from all over are flocking to golf contests and the golf section of the sportsbook. With another strong field on hand for the Travelers Championship at TPC River Highlands, expect another influx of golf enthusiasts, new and old, to the markets.

Unfortunately, fans won’t be there in Cromwell, CT for this tournament. This is one of the top events for attendance on the PGA Tour, but that could also make things interesting if the PGA Tour decides to make the rough a little more penal this week. It hasn’t been at all through the first two weeks.

What we look for at BangTheBook in this weekly DFS article are value plays. It isn’t hard to plug in Rory and DeChambeau and Simpson and Rahm and Koepka into your roster. The problem is that you run out of salary cap funds real fast when you do that. As such, our goal is to find cheap plays with high upside to help you fill out that lineup.

So, we’ll take the salaries from DraftKings and try to do that for this week’s Travelers Championship:

Brian Harman ($7,600) – We start with the Swingin’ Southpaw from Georgia, Brian Harman, who actually ranks 125th in the Official World Golf Ranking, so maybe his price is a little bit high this week. Left-handed ball flights tend to work really well at this course. Just ask three-time winner Bubba Watson. Or, you could ask Harman, who has finished in the top 10 three times in the last five years. Harman has finished 28th and 23rd in the two events since golf’s return. He did everything well last week at Harbour Town except for a few errant tee shots. This is a course that should help him with those. In 30 career rounds here, Harman is 13rd in Course History Index per DataGolf with +1.4 SG: Total when adjusted for field strength.

Max Homa ($7,000) – Max Homa did a lot of things well last week at Harbour Town. He only finished 41st, but was 12th in SG: T2G according to DataGolf. Homa’s problem was that he was awful with the putter. That hasn’t been a problem for him most of the season, as he ranks just outside the top 40 overall in SG: Putting. Homa missed the cut here at 1-under last year, but was actually one of the better players in SG: Approach. If he’s rolling his putts well and he’s able to hit the green, he is a player that can put up some very good numbers given how the other parts of his game are going.

Doc Redman ($6,700) – Doc Redman seemed to have found something last week. After opening with a 72, he shot a second-round 66 to make the cut and then went 65-67 over the weekend. Redman actually finished in the red in SG: Putting, but was excellent tee-to-green and on approach. To this point, he’s shot six of eight rounds at even par or better since the return and ranks in the top 25 this season in driving accuracy. The 22-year-old is still finding his way, but he’s been excellent off the tee and on approach and will get better in the putting department as the year goes along. With his T2G skills, he has a chance to rack up some points.

Matthew NeSmith ($6,600) – I usually list these by salary to make it easy, but Matthew NeSmith is my favorite pick of the week. NeSmith isn’t a long hitter, but this isn’t a course that punishes guys that are short off the tee. He ranks 38th in driving accuracy and 45th in SG: Putting. He’s 16th in GIR%. Last week, NeSmith was actually in the top 20 in SG: T2G, but it was his putter that actually failed him. He was seventh in SG: Approach. NeSmith really did it all except putt last week and that is usually one of the stronger parts of his game. This will be his first start here, but that doesn’t worry me.

Joseph Bramlett ($6,600) – Joseph Bramlett has finished in the top five each of the last two weeks on the Korn Ferry Tour. Now he returns to the PGA Tour for the Travelers. Bramlett missed the cut at the Honda Classic back in late February, but he played well with a T9 at the Puerto Rico Open and finished in the top 20 at the AT&T Pebble Beach Pro-Am. Bramlett has been a birdie machine the last couple of weeks in the Korn Ferry. He’s been peppering fairways and racking up GIRs. Obviously the PGA Tour is a bit tougher and the courses are more challenging, but good form can take you a long way right now with so many players trying to find theirs.