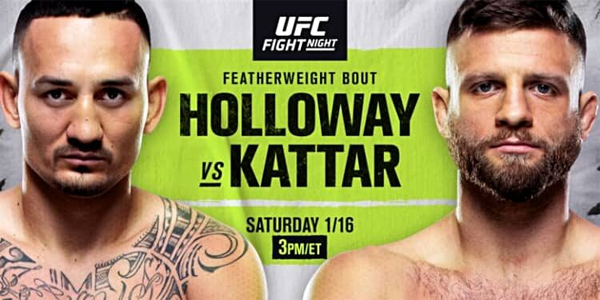 The UFC returns this week and will do so on basic network TV for the first time in more than two years. UFC on ABC 1 will feature a main event between Max Holloway and Calvin Kattar in the first UFC event to be televised on ABC.

This will also be another first for UFC, as the event will christen the brand new Etihad Arena in Abu Dhabi on Yas Island. The event is also expected to have about 2,000 fight fans, making it the first event since March to have spectators.

Naturally, there have been bumps in the road for this fight card. Brian Kelleher tested positive for COVID on January 1, taking away the Ricky Simon vs. Kelleher fight. Bethe Correia had to have her appendix out, so that fight against Wu Yanan was changed. Muslim Salikhov is not fully recovered from his COVID-19 bout, so his fight against Santiago Ponzinibbio now features Li Jingliang.

Those aren’t the only adjustments made to this card, but the UFC has been trying to build up some of its pay-per-view cards by rescheduling a lot of matches and this card has been the victim of that.

Nevertheless, UFC is back and we have a lot to discuss for UFC on ABC 1. We’ll do so with odds from BetOnline Sportsbook.

This is a midday start time at 12 p.m. ET in the United States with the opening fight between Jacob Kilburn and Austin Lingo. Both featherweights lost their UFC debuts. Kilburn is actually 0-2 with a Dana White Contender Series loss in 2018 and then a loss to Billy Quarantino by submission on December 7, 2019. Lingo, who was undefeated prior to his loss to Youssef Zalal in February at UFC 247, is the heavy favorite based on what he did as a member of LFA. Kilburn is only 25, so there is hope for his future, but his present looks iffy, as Lingo has a better resume to this point.

Sarah Moras will look to get back to .500 in this matchup with Vanessa Melo. Moras fell to Sijara Eubanks in May for her fourth loss in five fights to drop to 6-7. It is fair to wonder how long she will continue to be on the UFC roster, though she did survive the purge of aging, underperforming fighters to this point. Moras has a little bit of a height and size advantage here over Melo, who has dropped three straight fights herself. Melo is winless in UFC and she, too, may be on her way out. This is a backs-against-the-wall fight for both women, but it is impossible to invest in either one right now.

Ramazan Emeev is a big favorite over David Zawada at 170 pounds in the first of three welterweight fights scheduled for the card. Zawada is shaking off 14 months of cage rust in this one following a win over Abubakar Nurmagomedov in November 2019. It was his first UFC win after losses to Danny Roberts and Li Jingliang. Emeev’s win over Niklas Stolze back in July was his fourth in five fights. The former M-1 champ certainly appears to have the upper hand here, as the line implies. Emeev might be a good money line parlay piece with another fighter down the card or you can lay the straight price. Emeev has gone the distance in those four wins and Zawada isn’t a guy that has been tasked with going deep into the third round often. I think that’s the deciding factor.

The lone heavyweight fight on the card features Justin Tafa as a +155 underdog against Carlos Felipe. The -180 favorite had a very impressive performance against Yorgan De Castro to bounce back from his first career loss in July to Sergey Spivak. De Castro is thought to be a decent heavyweight prospect, but Felipe clearly won the fight. Tafa, meanwhile, was knocked out in the first round by De Castro in his UFC debut on October 5, 2019. Tafa beat Juan Adams last February, but Adams is a well below average fighter. These are contrasting styles, as Tafa’s two UFC fights have ended in the first round and both of Felipe’s have gone 15 minutes. Felipe likely wears down his opponent here, but this is a tough fight to bet.

This should be a good middleweight battle between Omari Akhmedov and Tom Breese. Breese has the size advantage here and Akhmedov is coming off of his first loss in more than four years to Chris Weidman. Each of the last seven fights for Akhmedov has gone the distance so the -160 on the over could be a good value buy. On the other hand, each of the last three fights for Breese has ended in a first-round knockout. This is a step up in class from those other opponents, though. Breese could really be tested here. He knocked out KB Bhullar in the Canadian’s first UFC fight and Breese was getting beaten up badly by Brendan Allen before catching a couple openings. I like the underdog here in Akhmedov at +130.

Joselyne Edwards slots in as a replacement for Bethe Correia in this match against Wu Yanan. Even though this is the UFC debut for Edwards, who only has one data point in LFA, the 25-year-old Panama native is getting a lot of respect in this line. It took 28 seconds to secure a knockout win in her last fight in UWC. Wu Yanan is only 1-2 in the UFC and she hasn’t fought since August 31, 2019. There are better fights to bet on this card, but the respect for Edwards is an interesting context clue.

You probably missed it, but Nassourdine Imavov did make his UFC debut last October with a win over Jordan Williams. It wasn’t the best of fights, as Imavov struggled with takedowns and couldn’t lock in a submission attempt, but he was the more active fighter and landed double the significant strikes of Williams. It took Hawes 18 seconds to knock out Jacob Malkoun in October after a huge knockout of Khadzhi Bestaev on the Dana White Contender Series in September. Imavov seems to have a stronger ground game, but the violence in Hawes’s strikes seems to give him the edge here at -140. This should be a fascinating fight…for however long it actually lasts.

BET UFC ON ABC 1 WITH A WELCOME BONUS AT BETONLINE

Punahele Soriano will be back in the Octagon for the first time in 13 months in this matchup with Dusko Todorovic. Soriano impressed Dana White with a unanimous decision win over Jamie Pickett and followed that up with a first-round knockout of Oskar Piechota. Unfortunately, we haven’t seen him since, so it’s hard to know where he stands going into this bout.

Like Soriano, who is 7-0, Todorovic puts a perfect record on the line here at 10-0. We did see him when he knocked out Dequan Townsend on October 3. He, too, secured a contract from a decision win on DWTNCS. This is a tough fight. Neither fighter has a loss. Soriano has six stoppage wins, including two tapouts. Todorovic has nine, including three tapouts. These are two skilled fighters with versatility to their respective games. Both fighters have only gone into the third round once. Maybe we should just take the under and expect a quick finish.

That money line parlay piece with Emeev could very well be in this fight in Joaquin Buckley. Buckley’s stock is skyrocketing and the opposite is the case for Alessio Di Chirico. Di Chirico was a promising prospect a few years ago, but he’s lost three straight fights to sit at 3-5 in the UFC. Di Chirico even barely beat Julian Marquez in his most recent win.

Buckley’s only loss came against Kevin Holland last August and there is no shame in that whatsoever. He was also very active in 2020 with four fights, including a very impressive win over Impa Kasanganay. As far as middleweight prospects go, even though Buckley has three losses to his name already, he’s one of the stronger ones that the promotion has to offer. He avenged one of his Bellator losses in LFA right before he got his UFC shot. He’s a very promising young fighter and one that is set up to bank another win here.

Li Jingliang slots in as the late replacement for Muslim Salikhov in this welterweight matchup at 170 pounds. We haven’t seen Santiago Ponzinibbio in a long time, but he is still listed as an overwhelming favorite in this fight. Ponzinibbio was last in the UFC Octagon on November 17, 2018. He fought three times in 2017, but only once in 2018. The now 34-year-old has had a very impressive career and has won seven fights in a row, including two Performance of the Night bonuses.

It is still hard to lay a price like this. He’s more than two years older than the last time we saw him. The gas tank could be a little shallower. The speed could be a little tempered. It’s not like Jingliang is very as a speedster and his recent returns have been shaky, as he’s needed late third-round knockouts in two of his last three fights and got beaten up pretty good by Neal Magny last time out. Ponzinibbio by default, but not a fight I’d look to bet.

The UFC will pay homage to 2016 with this fight between Matt Brown and Carlos Condit. Condit beat Court McGee last time out to end a five-fight losing streak. He’s only 36, but he might as well be 46 in fight years with 44 pro bouts to his name. Condit draws 40-year-old Matt Brown for the first time in his career. Brown fought back in May and lost to Miguel Baeza, getting knocked out for just the third time in his tenured career.

These are two big names from the sport and guys that have contributed a lot to what UFC has become. They’re also not in peak shape anymore and this is a fight that has very little to offer other than name value. I’m not even sure betting on this one is worth it, but Brown might be a live dog here, simply by virtue of not having lost eight of his last 11 fights.

At least the main event looks like a great scrap. Max Holloway will face somebody other than Alexander Volkanovski for the first time in a year and a half when he squares off with Calvin Kattar. Holloway lost by unanimous decision and then split decision to Volkanovski at UFC 245 and then UFC 251 for the featherweight title. This will be Holloway’s first fight without a title on the line since June 4, 2016. He’s had a remarkable run in the UFC.

Kattar has never had a title shot. Maybe he’ll get one with a win here. This is the biggest stage Kattar has had and Holloway, who has been very vocal about his most recent loss, wants another crack at the strap. It is crazy to think that Holloway is only 29, with 27 pro fights to his name. Kattar has big-time striking power, but we’ve seen Holloway’s chin on display more than once.

The total of 4.5 heavily juiced to the over implies that the fight should go Holloway’s direction. Kattar hasn’t fought into the championship rounds. The longer it goes the more it benefits Holloway’s experience and endurance. That’s why I’ll lay the favorite in the main.