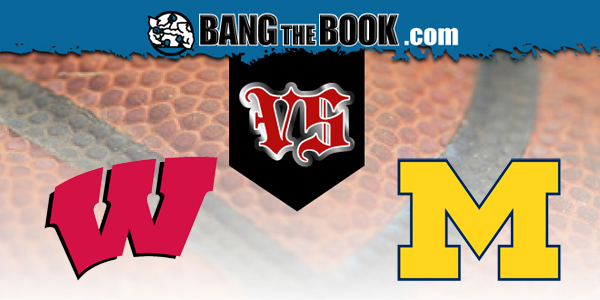 The Michigan Wolverines won 19 games last year, which would be pretty good for most teams but not necessarily near the standard they have set for themselves in recent seasons.

This year they may be ready to scale new heights. And we mean that literally.

The Maize in Blue, now coached by Juwan Howard, a former NBA All-Star who was a member of Michigan’s “Fab Five,” has his team at 10-0 and is tutoring a big man who has the potential to be a game-changer.

They will face their stiffest challenge to date as they host the Wisconsin Badgers at the Crisler Center at Ann Arbor at 7 PM ET Tuesday.

Wisconsin had a thriller on Saturday, turning back Indiana 80-73 in double overtime. Soph forward Tyler Wahl had a pair of three-pointers in the second overtime to become the hero of that game.

And we’re going to tell you something very interesting about that – Wisconsin committed a total of seven turnovers in that game.

Wisconsin presents something that is usually troublesome for opponents – balanced scoring. With all five starters averaging between 9.8 and 14.8 points per game, it’s obviously difficult to decipher who the “go-to” guy is at any given moment. And at the same time, all of them can hit triples. This also includes Wahl and Jonathan Davis off the bench.

What the Badgers will also have to do is compete with size. In the starting lineup they’ll have 6-10 Micah Potter and 6-11 Nate Reuvers, and while they can also step outside and shoot, we imagine their primary concern in this ballgame is to combat Michigan’s big man.

If you haven’t heard of Hunter Dickinson, you soon will. The 7-1 freshman out of Hyattsville, MD has stepped in and immediately become a force in the middle. With mostly a close-range game, he has made 75% of his attempts and ranks ninth in the nation in True Shooting Percentage, averaging 18 points and 8.1 rebounds per contest.

And he isn’t the only bothersome guy on the front line. Franz Wagner, a 6-9 forward, has a nice all-around game, with 12.2 points, 6.8 rebounds and 3.2 assists per game. And then there’s 6-7 Isaiah Livers, who is 38.5% from three-point range. Michigan shoots 62% from two-point range, while limiting its opponents to just 39%.

So maybe it’s a good thing for the Badgers that they are also pretty stingy inside the arc (allowing 41.9%, 12th best nationwide) and are insanely accurate from downtown (41.4% threes – fourth in the country). And yeah, they’re not afraid to shoot them either.

This will be only the second true road game for Wisconsin; they have previously traveled to East Lansing and beaten Michigan State. What is particularly attractive about them is that they start five seniors, which is almost unheard of for a top ten team. They may have enough savvy to give Dickinson a rude indoctrination into Big Ten play, perhaps taking him out of his comfort zone in the half-court. Keep in mind that despite their 10-0 record, the Wolverines haven’t yet faced an opponent of this caliber.

While it is true that Wisconsin had to lay it all out there on the floor and has not had a lot of time to recover, we don’t know that such a thing is a major factor. Consider this – in their last 43 possessions in the game against Indiana, they turned the ball over TWICE.

So let’s just say that if Michigan was in any way looking for a transition game based on steals, they can shelve that idea. And they aren’t going to win a shooting contest either.

Actually, I think this is a pretty good situation to take the points with Wisconsin.