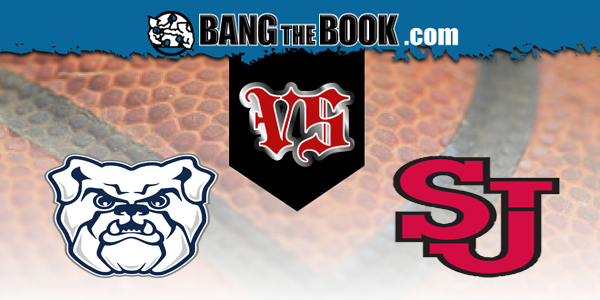 The St. John’s Red Storm has been nothing more than a light wind lately, as they’ve had difficulty implementing the intended game plan of coach Mike Anderson. With a 1-5 record in the Big East, they appear to be going backward, not forward.

On Tuesday night they will take on the Butler Bulldogs, who hope to be moving in the right direction with their point guard back in action.

The game takes place at 7 PM ET at the Carnesecca Arena in Jamaica, Queens. And BetAnySports customers will have a chance to get a better deal on the odds if they access reduced juice.

Anyone familiar with Mike Anderson knows that he is a disciple of Nolan Richardson, who made the term “40 Minutes of Hell” famous at Arkansas. Anderson played for Richardson at Tulsa, where they won the NIT together, He later coached under him at Arkansas, where he eventually took over the head job, after stops at UAB and Missouri. Now at St. John’s, his team was 17-15 last season.

Anderson’s style is to apply pressure defense and take the opponent out of its rhythm. When it works, it creates havoc in the form of turnovers. When it doesn’t, it allows for opportunities for easy shots.

St. John’s is indeed 34th best in terms of creating turnovers. But some of that is relative to how well the other team can handle the ball. In their last game against Creighton, they forced just 12 miscues, and were beaten down 97-79 by the Bluejays, who were without their best player, Marcus Zegarowski.

If you can beat the pressure, you can have an easy time shooting against St.John’s, which is 297th defending two-pointers and 305th contesting triples. This is a big dilemma no matter how good the other team is. And the Red Storm shoots in the hurry (seventh lowest time per possession) but they don’t shoot well enough to take full advantage of any open jumpers (33.5% from arc).

Sure, Anderson has some talented players at his disposal. Julian Champagnie contributes in all different ways (21 ppg, 89% FT, 40.4% triples, 2.2 offensive rebounds). Posh Alexander averages 4.4 assists, but is no threat from long range.

And as BetAnySports patrons may be aware, going high-tempo can backfire in a hurry. Creighton scored 56 first half points against them. Butler (63.7 ppg) doesn’t figure to do that. But can they impose their own pace and slow the whole thing down?

We would have had our doubts a couple of weeks ago. However, Butler has gotten back point guard Aaron Thompson, who had to sit out some time with a knee sprain. Thompson, a senior, has averaged 14.3 points and is a 58% shooter. He has also turned the ball over just seven times in four games. So we don’t expect the Bulldogs to crumble under the heat.

The biggest problem for St. John’s in this Big East game may not be Thompson, but rather Jair Bolden, a Brooklyn native who has been well-traveled, having played at George Washington and South Carolina before landing at Butler as a grad transfer. The 6-3 guard pulls down 4.1 rebounds per game and is a solid 43.3% marksman from three-point range.

I can’t see St. John’s being able to generate enough in the way of mistakes. Butler may not be an elite Big East team, but they are more confident with Thompson at the controls, and I would expect improvement out of them. But the Red Storm isn’t fundamentally sound on the defensive end. We would take the points with Butler, or maybe even consider the +110 moneyline price.