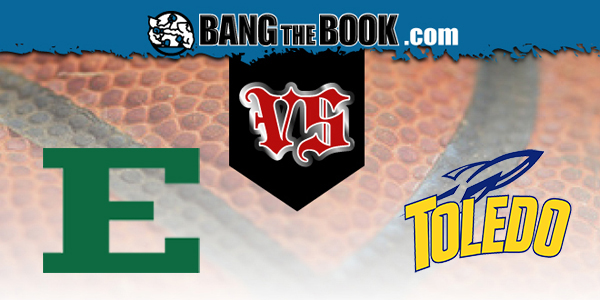 Football now takes a backseat until Saturday as college basketball, the NBA, and the start of the NHL season take center stage over the next few days. After only seven college hoops contests last night, we’ve got a busy slate of games for Tuesday night because of the magnitude of some of the major matchups.

It isn’t the biggest card, but Wisconsin vs. Michigan is a game with top billing, along with Duke vs. Virginia Tech, and a tough road test for Kansas in Stillwater against Oklahoma State. It is also a good night in the SEC with Alabama vs. Kentucky and Ole Miss vs. Florida. We’ve also got some good Big East games.

However, there is a game that I like more than any of those on the card and it is the spotlight game for this evening from the MAC between Eastern Michigan and Toledo. Toledo is favored by 11 with a total of 140.5 at BetOnline Sportsbook.

Sometimes you just have to go where the edges are, in spite of the popularity and watchability of other games. That’s what we’ll do tonight.

Eastern Michigan scored a very impressive 61-59 win over Akron this past Saturday for the team’s first win over a Division I opponent. Previously, Eastern Michigan had beaten Adrian and Olivet in blowout fashion.

This is already the second meeting of the season between EMU and Toledo. The Rockets won 91-74 in Ypsilanti back on December 4. Shortly afterwards, Eastern Michigan wound up with a COVID pause and went from December 9 to December 27 without playing a game. We don’t have a large sample size of games for the Eagles, who are 1-3 against Division I teams, including two conference losses.

In those two conference losses, Eastern Michigan allowed 1.291 and 1.229 points per possession. Central Michigan is a well below average team, but the Chippewas were 23-of-33 from 2. The sample sizes are extremely small, but in Eastern Michigan’s D-I games, opponents have shot 67% on two-point looks.

The weird start to the season has hurt Eastern Michigan in a lot of ways. They’ve shot pretty well on two-pointers, but not from deep, shooting 27.2% on triple tries. Their assist rate is 280th in the nation at 46%, so they have not spread the ball around well on offense.

This is a team with a lot of upperclassmen playing big minutes, but they just haven’t had enough game reps to gel it would appear.

The opposite is true for Toledo. Tod Kowalczyk’s team will be taking the floor for the 14th time this season. The Rockets are shooting 38.5% from 3 and they take a ton of them with a 3P Rate of 45.4%. This means that 45.4% of their field goal attempts are three-pointers and they’ve shot very well on those types of attempts so far this season.

Toledo is also an excellent free throw shooting team at 77.6%. The Rockets are off to a 5-0 start in conference play, including that blowout win over Eastern Michigan. To this point, the only losses for the Rockets are Bradley on a neutral, Xavier on the road, and Michigan on the road. They lost by 20 to Michigan. They only lost by two to Bradley and three to Xavier.

This could very well be the best team in the MAC and they’ve been able to prove it at several points. They only beat Kent State by two on January 5, but every other MAC win has been by double digits.

Unlike EMU, who has a low assist rate, Toledo’s assist rate is 60.8%, which ranks 28th in the nation. They share the basketball extremely well and also make a lot of shots.

It’s pretty obvious where I’m going with this game. Toledo and Eastern Michigan both shoot a lot of three-pointers. Toledo is just far better at making them. To make matters worse for EMU, Toledo has only allowed a 28.3% make rate on those treys on the season.

This will only be the second true road game for Eastern Michigan, so they’ll also have to contend with a different shooting backdrop with their low rate of success.

GET YOUR 100% DEPOSIT MATCH BONUS AT BETONLINE SPORTSBOOK