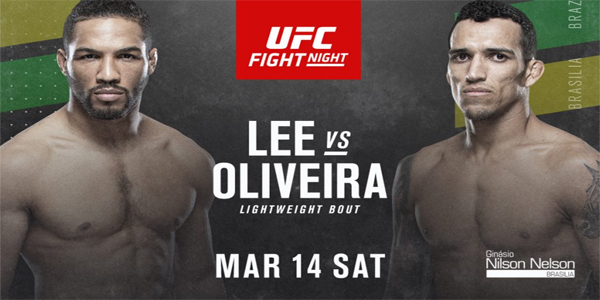 To this point, despite what seems to be a global health crisis with the coronavirus, the UFC hasn’t had much to say about this week’s event in Brazil or any of its other upcoming events. So, we assume business as usual as UFC goes to Brasilia for this week’s UFC Fight Night 170 or UFC on ESPN+ 28, if that’s how you prefer to name the events.

We did have one change to the card because of coronavirus, as Su Madeaerji withdrew from the fight because he would not travel. Other than that, we go on as scheduled.

We’ll break down all of the bouts with help from the odds at 5Dimes Sportsbook and, per usual, we’ll take an extended look at the five main card bouts.

Action starts with the first of three women’s fights on the card. Veronica Macedo is a -185 favorite in the bantamweight division against Bea Malecki. This is the second UFC fight for Malecki, who got Duda Santana to tap out back in June. She’s got three stoppage wins and doesn’t really have the history of somebody like Macedo, but the +160 price looks kind of attractive here for somebody that has a huge size advantage in the fight. Malecki is five inches taller than Macedo. Macedo started her UFC career 0-3, so it isn’t like she’s setting the division on fire. Give the dog a look.

Bruno Silva takes on David Dvorak at 135 pounds in the flyweight division after Su Madaerji withdrew from the fight. This is the UFC debut for Dvorak, who was most recently fighting in promotions like Oktagon, NOW, and XFN. It seems like a big leap for him. With 20 career fights, none of them outside of the regional circuit, it’s fair to have a lot of concerns about Dvorak. Silva is only a -125 favorite, which seems cheap to me.

Back to the women as Maryna Moroz is +120 to Mayra Bueno Silva’s -140 in the flyweight division. Silva is the newcomer to the division. She won on Dana White’s Contender Series in August 2018 and then followed that up with a first-round win over Gillian Robertson just over a month later. Then she had a long layoff. Moroz has a lot more UFC experience, but she, too, has not fought in about a year. This looks like a good fight to stay far away from, as Moroz has more data points against UFC-caliber fighters, but both girls are off of long breaks.

Enrique Barzola is one of the bigger favorites on the card at -190 against Rani Yahya. Yahya is +165 in hopes of getting back into the win column following a loss to Ricky Simon back in February. Here we have yet another fighter off of a long layoff, with Yahya going on 13 months. That could be feeding into the price a little, as Barzola has three fights in that span. He has lost two of them, however. Barzola, though, has gone the distance in five straight and the longer this one goes, the more his cardio becomes a factor against Yahya. To me, Barzola wins and taking him by decision might cut the juice a bit.

Aleksei Kunchenko and Elizeu Zaleski dos Santos are up next in the welterweight division. Kunchenko only has one loss to his name, but he’s giving up some size and some UFC experience here. He is the slight underdog at +105. Zaleski is coming off of a loss to Li Jingliang to snap a seven-fight winning streak. It marked his first loss since his UFC debut against Nicolas Dalby back in May 2015. Kunchenko is coming off of his first career loss. He fell to Gilbert Burns in what was a third straight UFC fight to go all 15 minutes. As a general rule, I like to fade fighters off of a first career loss. While many believe it to be a bounce back spot, I see it as a crisis of confidence. You found out that you are human. That you can lose. I think it leads to some extra-added pressure in the next fight and that puts me on the Zaleski side at a reasonable -125 number.

Amanda Ribas is one of the biggest favorites on the card at -345 against Randa Markos. As you would expect, there are a ton of Brazilian fighters on the slate and Ribas is the one most likely to get a win here. Markos isn’t a bad fighter by any means, but Ribas is just better all around and is now in her third fight after a long layoff. It has to be her. Maybe you can look at inside the distance options to cut down the price, though Markos has only been finished twice in her career.

Jussier Formiga is -160 against Brandon Moreno. The underdog is +140 in yet another fight featuring a Brazilian fighter. Moreno’s win over Kai Kara-France at UFC 245 changes the outlook a little bit with regards to this fight. Had he lost that one, it would have been much tougher to look at him here. Given that he fought to a draw with unbeaten Askar Askarov, it seems like he may just be a fighter capable of punching up, so to speak. Good fighters bring out the best in him. Formiga is a good fighter, but I feel like Moreno has a chance here. I’ll try the +140.

John Makdessi looks to keep a winning streak in tact as he takes on Francisco Trinaldo. Makdessi has three straight unanimous decision wins under his belt after his December 2016 loss to Lando Vannata. We don’t really see him a whole lot, as he fights about once a year these days in his mid-30s. This will be his first fight in just about a year, as he beat Jesus Pinedo back on March 23.

Make no mistake, this is a step up in class for Makdessi. This could potentially be the last fight for 41-year-old Francisco Trinaldo as well. Trinaldo last fought in November and scored a really big win over Bobby Green. It felt like he had been reeling a little bit after the loss to Alexander Hernandez, but that bounce back effort was a good one. Trinaldo is 3-0 in his last three fights in Brazil and 5-1 over his last six. It’s just tough to see him losing here as Makdessi steps up in class and Trinaldo fights in his home country.

A couple of big swinging light heavyweights square off in this one between Nikita Krylov and Johnny Walker. Krylov’s last fight went the distance, which was actually the first time in his career that happened. Glover Teixeira likes to win fights that way at this stage of his career and that’s how it played out for him. I do not expect this fight to play out in a similar way at all. Teixeira’s fight IQ kept Krylov from getting inside. Walker’s reach could prevent that here in this one, as he stands 6-foot-6. He is huge for this division.

Each of the last four fights for Walker have ended in the first round. He’s had three to the good and one to the bad. His loss to Corey Anderson back in November at UFC 244 was his first defeat in a while. I think this is a tough spot for both fighters. Krylov just went the distance and couldn’t get inside, which leaves concerns in my mind. Walker can get caught by Krylov’s excellent ground game. If Krylov can get this fight to the ground, that is his path to victory.

I don’t see a decision here. Krylov could win by knockout, but I think Krylov by sub and Walker by KO are the ways to play this, with a good chance at plus money both ways. If you prefer one over another, you can go that route.

It hasn’t gone overly well for Renato Moicano of late. All three of his career losses have happened over his last five fights, but those have been against the Korean Zombie, Jose Aldo, and Brian Ortega. There is no shame in losing to those three guys. What has been a little bit shocking has been the method of victory, as all three guys won in stoppage fashion.

Moicano gets a bounce back fight at home here against Damir Hadzovic. Hadzovic was never really in the fight last time out against Christos Giagos. I don’t think Hadzovic is really in this fight either. It’s all about Moicano here, who is probably a good parlay piece with Ribas.

We effectively have a co-main event here, with Demian Maia vs. Gilbert Burns in the welterweight division and then the Charles Oliveira vs. Kevin Lee fight in the lightweight division. Maia has ripped off three straight wins over Lyman Good, Anthony Rocco Martin, and Ben Askren, but Gilbert Burns is more on the level of guys like Colby Covington and Kamaru Usman. He lost both of those fights, albeit by decision.

This is also a step up for Burns, though. He beat Gunnar Nelson, dealt Aleksei Kunchenko his first loss, and topped guys like Mike Davis and Olivier Aubin-Mercier, but Maia is a better fighter than the majority of the guys that Burns has faced recently. I think there is a lot of unknown in a fight like this. You’ve got the younger guy in Burns and that should help if this is a long fight. You’ve got a resurgence from Maia in his early 40s. Ultimately, I think the favorite is quicker and has the better gas tank, but this will be an interesting fight both ways.

Speaking of stepping up in class, that is what Charles Oliveira is doing here. You can see the respect that he is getting in the markets for having six straight stoppage wins. Even though he has faced inferior competition in some of those scraps, we’re still talking about a fighter that has a high ceiling and a lot of upside. The lightweight division is just sort of lacking guys that can stand up to the top fighters.

Like Kevin Lee. Lee has fought those guys. He has fought Tony Ferguson and Al Iaquinta. He’s also had some issues with making weight, which is why he fought Rafael dos Anjos as a welterweight a couple of fights ago. We have to see how Lee looks physically and see if he makes weight. It has been a problem for him. He has had some issues with that cut in the past and he has struggled when he has made weight and made that cut.

Ironically, Lee becomes a stronger play if he misses weight. If he doesn’t, what that cut takes out of him could be problematic against a very good, very versatile fighter in Oliveira.