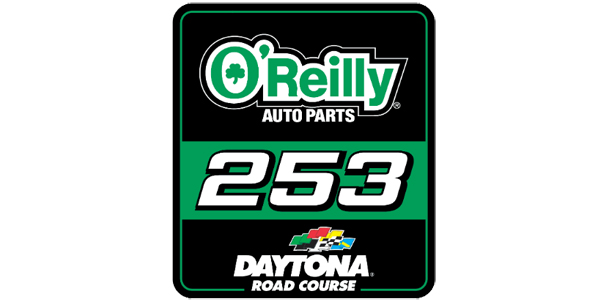 Just as we all expected, Michael McDowell has claimed the first automatic spot into the 2021 NASCAR Cup Championship Playoffs. His win in the rain-delayed and generally-chaotic Daytona 500 means that one of the 16 playoff spots is likely gone, unless we have 17 different race winners this season and McDowell falls below those drivers in points.

The NASCAR schedule looks a lot different this year and there will be a road course at Daytona International Speedway for the second straight time. Last season, DIS got the race from Watkins Glen. This season, DIS has its own and it will be the O’Reilly Auto Parts 253. This race replaces the lost Auto Club Speedway race due to COVID-19 restrictions in California.

We’ll break this one down from all sides and all angles as the drivers get ready for 252.7 miles on the road course at Daytona. We’ll also grab odds from our pals at MyBookie Sportsbook.

Reigning champion Chase Elliott is the favorite at +170. This was the Go Bowling 235 last year. That race will return to Watkins Glen in August. Elliott was first, followed by Denny Hamlin, who is the fifth choice at +900. Martin Truex Jr. was third in last year’s race and he is the second favorite at +500. Jimmie Johnson and Chris Buescher rounded out the top five.

On the Road (Course) Again

NASCAR has added some road course racing to the schedule this season in hopes of creating a more exciting product. A lot of oval tracks feature “Follow the Leader” races and officials decided to try and create some more intrigue and drama. This is one of seven road course races scheduled for the 2021 season.

Chase Elliott won on this track last year in this event and is probably the most trustworthy of the racers on road courses. He also won on the Charlotte Roval in the playoffs. Elliott also won the 2019 race at Watkins Glen and was the winner on the Roval that year as well. Truex was the winner at Sonoma back in 2019. Last year’s race was not held because of COVID.

There will be three races at Daytona this season. The 500 is completed and the Coke Zero Sugar 400 will be the last race of the regular season. This race is the only one on the road course, which technically has 14 turns and measures 3.61 miles. The drivers will do 70 laps on the track and check in just shy of 253 miles.

Most of the action is inside of what would be the first turn on the speedway track, but this is a little bit of a modified road course for Daytona. All four turns of the speedway track will be used, but a little chicane has been added going towards the finish line to add two more turns. There is also a chicane on the back straightaway.

The first half of the circuit features eight of the 14 turns. The only “turns” on the second half of the track are the chicanes. It will be very fascinating to see if passing takes place on the narrower early turns or out on the regular speedway track where the drivers can pick up some additional speed.

BET ON NASCAR WITH A WELCOME BONUS FROM MYBOOKIE

As we talked about last week for the 500, Michael McDowell actually had the highest average finish at Daytona and his patience paid off as he found a way to cross the finish line first. This week, the only data point we have comes from last year’s rescheduled Watkins Glen race.

Chase Elliott won the first stage and the full race. Denny Hamlin won the second stage. Joey Logano ran second for the first stage and ultimately finished ninth. Clint Bowyer ran fourth and second in the two stages, but he will be in the broadcast booth for this one after retiring from the sport. Jimmie Johnson also ran well, but he, too, has retired.

William Byron ran well. He was seventh in the first stage, fourth in the second stage, and finished eighth. Erik Jones was in the top 10 for the first stage and 11th at the end of the race. There were three Hendrick cars in the top 10, two Joe Gibbs cars, and then one each from Roush Fenway, Stewart-Haas, Richard Childress, Penske, and Front Row. In other words, the results were very spread out.

It isn’t a very sexy pick at +170, but it is pretty clear that Chase Elliott is the best road course racer on the circuit right now. Anything can happen, but there were only four cautions last year in what was a very clean race. There were 13 lead changes, but only across six drivers.

If you want to get a little more risky, Denny Hamlin at +900 isn’t bad, given that he’s generally a quality racer in tight conditions and usually has a strong car with the backing of Joe Gibbs Racing.

The long shot I’ll roll the dice on here is Joey Logano at +1800. Logano was better on road courses a few years ago, including a win at Watkins Glen and a few top-five finishes at Sonoma, but he was second on the Roval last year.