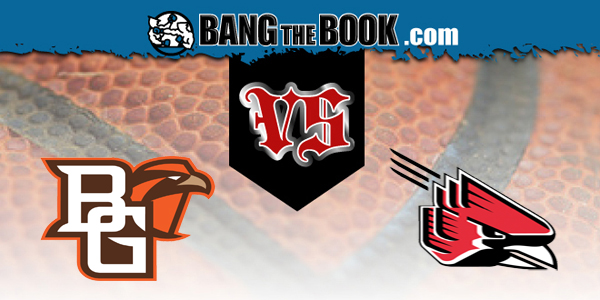 ETSU started our week off on a very bad note with a simply stunning loss in failing to cover +1 or the +1.5 that some people got later in the day. We won’t dwell on that one, though. It’s time to look at Tuesday’s card.

We’ve got an okay Tuesday card with some bigger games and some interesting matchups. One such matchup takes place in the 7 p.m. ET window between Bowling Green and Ball State. Bowling Green has been bet into a two-point favorite with a total of 150 over at Bovada Sportsbook. The Falcons opened a one-point dog. Is this the right line move?

The Falcons have been a disappointment this season in a lot of ways. After opening conference play 5-0 and then 6-1, the Falcons dropped six in a row to fall to 6-7. They weren’t very competitive in some of those games either. The Falcons didn’t make enough shots and allowed way too many shots to be made against them.

They shot better against archrival Toledo last time out, but still struggled for the sixth straight game on the defensive end. During that six-game skid, BGSU allowed .983, 1.407, 1.230, 1.123, 1.095, and 1.060 points per possession. They mixed in a few decent offensive games, but were no match for what their opponents were doing.

This wasn’t really the expectation for the Falcons, who could very well be the most talented team in the conference when everybody is in the lineup. This is just a team that hasn’t really lived up to its potential. Saturday’s game against Toledo felt different. The Falcons won 88-81, righting a wrong at home from January 30 when they lost by 16 to the Rockets.

BG is fifth in the nation in TO% on offense and a good free throw shooting team. Those are usually recipes for success, but they’ve struggled badly from three-point land in conference play and have not gotten enough stops on defense. Opponents have made 34.7% of their three-point attempts against them in league play and they’ve only made 30.9% themselves. They were 10-of-24 in the win over Toledo.

With likely just eight teams in the MAC Tournament, Ball State is fairly safe for now, but James Whitford’s team would be well-served to bank a few more wins. Ball State woke up in their most recent game against Toledo, much like Bowling Green did. That win for the Cardinals by 14 points over the Rockets wiped out a four-game losing streak for the men from Muncie.

The Cardinals have a TO% over 20%, which is a big contributing factor. Another one is that they’re only shooting 48.5% on two-point shots. They’ve been active and accurate from deep, but don’t really have a lot of big scoring threats down low to utilize at the rim.

Bowling Green just got revenge from a really disappointing home loss against rival Toledo. It would appear that the market expects them to do the same here against Ball State and I would agree with that sentiment. The Falcons should get some extra possessions in this game because they take better care of the ball than the Cardinals.

In the first game, Ball State was 12-of-26 from three to just 5-of-24 from Bowling Green. It was also a rare good performance on the rebounding front for Ball State. I’d certainly expect some positive regression for BG here.