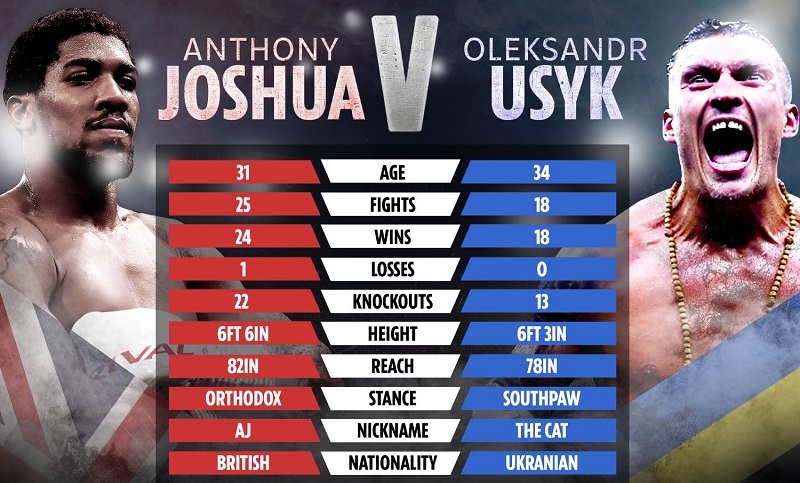 Certainly there are BetAnySports patrons who enjoy those boxing events that are of the “exhibition” variety, or at least out of the ordinary.

But there are some fights upcoming that are of far greater significance, as the world heavyweight picture gets sorted out.

A judge has ruled that Tyson Fury, who was about to announce a monster fight with Anthony Joshua, had to fight for a third time against Deontay Wilder, and so that bout will take place on October 9 at the T-Mobile Arena in Las Vegas.

We’re going to talk about that fight soon, but right now let’s focus on the other big heavyweight bout – and the one that comes first – which pits Joshua against the former undisputed cruiserweight champion, Oleksandr Usyk of the Ukraine.

At stake are the WBA, IBF and WBO titles. Usyk (18-0,13 KO’s) happens to be the WBO’s mandatory challenger, and the organization did order Joshua to fight him. I’m not so sure Joshua wanted to undertake this, because the opponent here is tricky.

And he has credentials as well. As Joshua was winning the super heavyweight gold medal in the 2012 Olympics in London, Usyk was capturing the gold in the heavyweight class. And in 2018 he was voted Fighter of the Year by a number of different institutions, including the Boxing Writers Association of America.

In the boxing betting odds that have been posted on this fight by the folks at BetAnySports, Joshua is the favorite, but Usyk is getting a lot of respect:

It should be pointed out that Usyk possesses a lot of those qualities that could give any opponent some problems. He is an extremely savvy ring general with great boxing ability. He knows how to cut off the ring. He throws a lot of jabs out there. He has a lot of stamina, so he can make his opponents work.

And on top of that, he’s a southpaw.

Many of you know the story with Joshua, He won his first 22 pro fights, which included a title win over Wladimir Klitschko. Then he got knocked out by Andy Ruiz, after reportedly getting knocked down, if not out, during sparring.

He subsequently won the rematch against a puffier-than-usual Ruiz in Saudi Arabia, and stopped Kubrat Pulev in nine rounds in December.

It probably wouldn’t be a wise thing for Usyk to go out there looking for the knockout. While he was a dominant cruiserweight, he’s a rather small heavyweight, topping out at around 215 pounds.

And Usyk’s strategy usually involves outlasting his opponent and throwing a lot of punches, kind of like Joe Calzaghe used to do. The problem for him is that those punches don’t come with a lot of force. At this weight level, he doesn’t seem to be throwing anything hard. He would have to wear Joshua down or frustrate him to death to set him up for a knockout.

And you’ve got to understand that Joshua, who stands 6-foot-6, is going to be between 235-245 pounds, in all likelihood. His size is going to be difficult for Usyk, who had all he could handle dealing with the power of strength of Derek Chisora, in one of just two fights he’s had against legitimate heavyweights.

If there is anybody who is going to wear down, it’s Usyk, at least in this reporter’s opinion.

I’d much rather have Joshua’s size and power, along with considerable boxing ability,on my side. As such, the price on him may turn out to be a real bargain.

Bet this and all kinds of fight action at BetAnySports, and that includes the UFC as well!  And of course, you can get reduced juice on all your football action…… Deposits are very easy, as you can use a number of methods including Bitcoin, which is fast and easy with their automated system, and NEVER incurs a transaction fee!