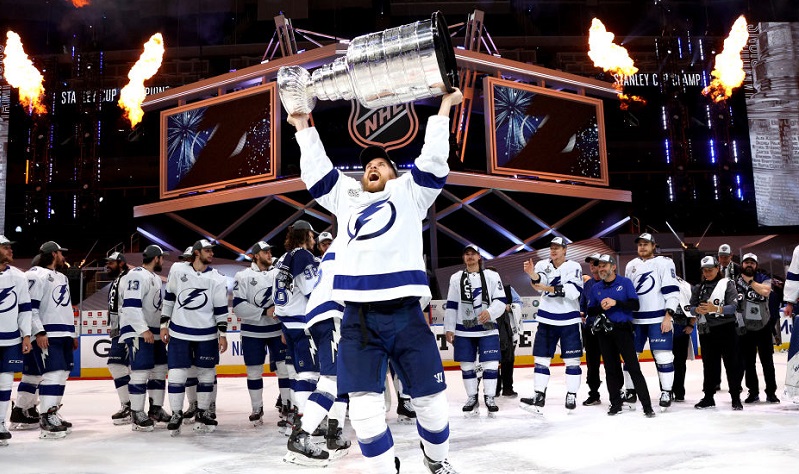 Believe it or not, the NHL regular season is only a month away. And things are getting back closer to normal. BetAnySports customers are probably expecting that the Tampa Bay Lightning will be a strong contender to win the Stanley Cup for the third time in a row. But the Bolts are not the favorites in the field.

No, that distinction goes to the Colorado Avalanche, who check in at +450, while Tampa Bay is at +550. One of the ways the Avs attained favorite’s status is that they were able to fill the vacuum created by the free agent departure of goaltender Philipp Grubauer, who joined the brand-new Seattle Kraken.

Colorado saw itself being shut out if it didn’t act quickly, so general manager Joe Sakic reached out and made a deal with the Arizona Coyotes, who dangled Darcy Kuemper, a veteran with a 2.47 goals against average. And so a deal was made that enabled the Coyotes to continue the path toward rebuilding. Where that rebuilding is going to manifest itself down the line is another question. The team was essentially thrown out of the Gila River Arena by the city of Glendale, and now they want to get a new arena built in Tempe. Failing that, they may be looking for a new market altogether.

The Chicago Blackhawks, who missed last season’s playoffs, are listed at +4500, and they have not gotten off on the right foot with their new goaltender.

Chicago made a trade with the Vegas Golden Knights for Marc-Andre Fleury, the reigning Vezina Trophy winner, as the Knights looked to create some cap space. The first jersey issued to him had his name spelled “Fluery.” Oops.

The Buffalo Sabres are one of the teams bringing up the rear at 250-1 (+25000), and they have been somewhat busy in the free agent market, although they traded a top asset, forward Sam Reinhart, to the Florida Panthers. People are still looking their way, however, to see what they are going to do about star player Jack Eichel, who reportedly wants out of Buffalo.

Eichel has new agents, and they have been meeting with management to figure out the best way for both sides to terminate the relationship. Many teams are ready to make offers, and the hot rumor is that the New York Rangers (+2000 to win the Stanley Cup) are the team with the most interest. The acquisition of someone like Eichel could have an impact on the futures odds to win the Cup.

All teams this season are scheduled for 82 games. Regular season action begins October 12, as the Lightning host the Pittsburgh Penguins, with Vegas playing host to the Kraken in their first game.

If NHL players wind up participating in the Olympics, there will be a break from February 3 (start of the All-Star week) to February 22 (end of the Olympic competition).

The outdoor “Winter Classic” will be held on New Year’s Day at Target Field in Minneapolis, with the Minnesota Wild hosting the St. Louis Blues.

One thing that is very different about this season’s NHL is that the divisions have a different alignment than the aberration in 2020-21, where all the Canadian teams, for example, were in the same division, and teams only played each other within their own division.

Along those lines, below is the divisional lineup, along with the NHL futures odds as they have been determined at BetAnySports.

You’ll see that the Montreal Canadiens, last season’s Cup runner-up, is back in the pack at +2500.

Remember that at the newly-designed BetAnySports, you’ll find everything you need to get the NHL started the right way!…… They make it very easy to deposit as well, with credit cards and the virtual currency of Bitcoin, for which you pay no transaction fees!