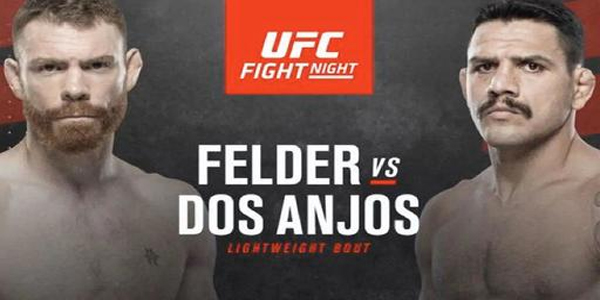 Give Dana White all the credit in the world for giving fight fans a lot to look forward to during one of the hardest years ever. It seems like there has been a UFC card every Saturday for the last several months and we’ll get UFC on ESPN+ 41 this week with a main event of Paul Felder vs. Rafael dos Anjos.

The UFC APEX training facility in Las Vegas will once again be the site, so this is also called UFC Vegas 14. Some might call it Fight Night 183. Whatever you call it, and it would be great to get more consistency with the name, we’ve got another loaded fight card for those that have ESPN+.

This isn’t the best card that the UFC has thrown out, but there is a pay-per-view next weekend, so that is understandable. We’ll break it down with odds from BetOnline Sportsbook from the first fight to the main event and everything in between.

The one and only heavyweight fight on the card features Guam’s Roque Martinez in his second career UFC fight against Don’Tale Mayes. Martinez lost to Alexandr Romanov back on September 12 in submission fashion to fall to 15-6-2. Mayes is 0-2 in the UFC after going 2-0 on the Dana White Contender Series. He’s not fighting anyone the caliber of Ciryl Gane this time, but his loss to Rodrigo Nascimento was a disappointing outcome in what was a pretty even fight before the tap-out. Mayes is the rightful favorite here, especially with eight inches of height and nine inches of reach.

Geraldo De Freitas dropped a split decision to Chris Gutierrez to snap what was a lengthy seven-fight winning streak against Jungle Fight, Shooto, and his UFC debut against Felipe Colares. He’ll try to bounce back here against Tony Gravely, who is also coming off of a rare loss to Brett Johns. That snapped a seven-fight win streak for Gravely, who was the CES MMA champion in that time. Two of Gravely’s past losses are Merab Dvalishvili and Manny Bermudez, so he doesn’t have too many bad performances to his name. It looks like -147 is short to me, all things considered.

Former Invicta strawweight champ Kanako Murata makes her UFC debut here against Randa Markos. Murata is 11-1 in her career, but she hasn’t fought in over a year. Markos has dropped two in a row in 2020 to fall to 10-10-1 in her career. She certainly has a lot more data points at the highest level, but the 35-year-old is taking on a strong 27-year-old upstart here. Markos does have a size advantage and tends to really extend her fights. As we see with the -345 on the total over 2.5, Markos is likely to do the same here. Can she do enough to win? Maybe not, but -177 on Murata is a steep price. This fight was supposed to feature Livia Renata Souza instead of Markos. So Murata, in her UFC debut, has to shift gears for a different kind of fight.

Both Jose Quinonez and Louis Smolka enter this fight off of losses. Smolka lost to Casey Kenney back on May 30 and Quinonez lost to Sean O’Malley right before everything hit the fan with COVID at UFC 248. It is a tough fight to get a handle on, as both guys have struggled in recent matches. Smolka’s more impressive finishing ability could come into play here with 14 stoppages in 16 wins. Quinonez has nine wins and only three are by stoppage. Smolka should be the aggressor and likely inflict more pain, so the lean goes to him, but only slightly.

Rhys McKee’s UFC debut didn’t go well, but there’s a reason for that. He ran into the buzzsaw and Dana White’s darling Khamzat Chimaev. McKee lost by first-round knockout in what wasn’t really a fair fight. Now McKee draws veteran Alex Morono. Morono, who lost in just 27 seconds to main card fighter Khaos Williams back in February, had three straight victories prior to that stunner. The 30-year-old Morono is far more accomplished than McKee, who seems to be getting a raw deal again here. Morono is a nice parlay piece for something else on the card at -190.

Ashley Yoder has fought much stronger competition than what her opponent has faced, but back-to-back losses and an unimpressive 7-6 record appear to be factors in this line. Miranda Granger is just 1-1 in UFC and her fights have been against Hannah Goldy and Amanda Lemos. Yoder’s last two losses, both by decision, were to Livia Souza and Randa Markos. This feels like a good spot to back Yoder, who won under similar circumstances against Syuri Kondo and Amanda Cooper when those two were trying to find their ways in the UFC. Yoder isn’t a bad underdog play.

This will be a catchweight fight at 195 pounds between Sean Strickland and Brendan Allen. Strickland just fought on Halloween against Jack Marshman, so he gets a little bit of a break here in terms of the weight limit. Strickland won that fight going 15 minutes with his opponent in a nice unanimous decision victory. Allen hasn’t fought since June 27, as he was supposed to fight Ian Heinisch last week, but he tested positive for COVID-19. That is the real reason why this fight is a catchweight bout.

The thing about Strickland is that he’s back on really short notice after going two years between fights. He won handily over Marshman and took very little punishment in the fight, but this is a lightning-fast camp and a quick turnaround for Strickland with the layoff. Allen, meanwhile, trained all the way up to the Heinisch fight and was in tip-top shape going into last week. That makes all the difference for me.

Eryk Anders has plenty of notice as a replacement here. Originally, Andreas Michailidis was supposed to fight Antonio Arroyo, but those plans changed on October 23. Instead, Anders will slot in for his first fight since losing to Kryzstof Jotko back on May 16. Arroyo will be out there for the first time since his loss to Andre Muniz just under a year ago. Arroyo was a two-time winner on the Dana White Contender Series and that was his first fight on a full-fledged UFC card.

Anders seems to be at a cheap price here with that in mind. Arroyo hasn’t fought in a while and failed his first step up in class and it wasn’t even against a guy like Anders, who has headlined Fight Night cards in the past. Anders has not been impressive and has lost three of his last five, but he will be the more athletic and faster fighter here against Arroyo, who is more of a technical fighter. As long as Anders keeps this fight upright, he’ll be fine.

The future of the women’s strawweight division will be on display here. Cory McKenna and Kay Hansen are both 21 years old and they will share the spotlight here. McKenna, a member of Team Alpha Male, won over Vanessa Demopoulos on the Dana White Contender Series on August 11 to get her shot here. Hansen was victorious in her UFC debut against Jinh Yu Frey, a wily veteran and a good test for Hansen.

Hansen was bloodied in the fight, but locked in an armbar in the third round for the win. McKenna, who just turned 21 on November 7, only has six fights to her name, most of them in Cage Warriors. Hansen has 10 and she has taken her lumps with a 7-3 record. You can cut down on the juice here with Hansen via submission to take a shot at that or take a look at the under 2.5, as both girls should be aggressive here.

Julian Marquez is a big -275 favorite here, even though we haven’t seen him in the Octagon in 29 months. Marquez last fought Alessio Di Chirico on July 6, 2018 and lost by split decision. He’s been away from the UFC since then. Saparbeg Safarov was supposed to be in this fight against Marquez on August 29, but COVID travel restrictions pushed the fight back to now.

Safarov has struggled with three losses in four UFC tries. Will Marquez have the same fate as Sean Strickland, who returned from two years off to bag a win a few weeks ago? Will the cage rust be too much? This is my least favorite betting option on the card, as I don’t really see a reason to bet either side. Safarov is probably not UFC-quality, though, so Marquez gets the nod by default.

This is the biggest spotlight yet for 26-year-old Khaos Williams. He was a winner in his UFC debut and it took all of 27 seconds at UFC 247. Abdul Razak Alhassan was a really promising prospect in the UFC before he ran into some legal troubles. After beating Niko Price to improve to 10-1, Alhassan was accused of the alleged rapes of two women. He was eventually found not guilty in a trial that finally started on March 5.

Alhassan returned to the UFC to a loss to Mounir Lazzez that went 15 minutes. He was a powerful knockout artist in his three fights prior, but he couldn’t find that big shot against Lazzez. Alhassan is now 35 and we have to wonder if that fighter we saw in the past is still inside of him somewhere. If he’s there, he better show up here. The line, both side and total, imply that he is. Alhassan’s two losses are both by decision, so it would be something of an upset for Williams to finish him. That being said, at +193, with Alhassan off of such a flat effort, it’s a chance I’d prefer taking.

If you aren’t excited about the main event, it makes sense. Paul Felder wound up being a late fill-in for Islam Makhachev, who came down with a staph infection this past weekend. Now Felder, who has gone the distance in each of his last four fights, will slot in against Rafael dos Anjos. RDA has lost four of his last five fights and it looks like the 36-year-old is at the tail end of his career.

In fairness, as is often the case with aging fighters that have been mounting losses, he has fought some very good competition in that span. Paul Felder is not in that category, at least relative to his peers. This will be dos Anjos’s first lightweight fight since 2016, so we’ll see if the change in weight class affects him in one way or another.

Felder has 10 knockout wins and dos Anjos has 10 submission wins. We have contrasting styles here, but also guys that haven’t had many finishes lately. Felder was thought to be semi-retired from UFC prior to this fight. In that respect, dos Anjos should be better prepared.