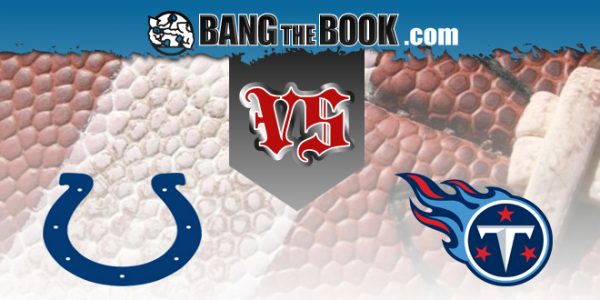 There is some excitement, we imagine, on the Indy side with the news that TY Hilton is slated to be available for the Colts. But you know, tight end Jack Doyle won’t be in the lineup.

With the Titans there are a bunch of banged-up people. But when it comes down to people who won’t be in uniform, Adam Humphries, who isn’t going to get out of the concussion protocol, is the only absence, unless some news comes right before game time.

When you look at the fundamentals of this matchup, what comes to mind is that Tennessee has done a rather poor job, on balance, in getting to the opposing quarterback, with an adjusted sack rate that is one step from the bottom of the league. And would we really be justified in using three sacks of Chicago’s Nick Foles last week as an indicator that they have made progress?

Probably not. You’d like to think you could pressure Philip Rivers if you were a Colts backer, but with the lack of a Titan pass rush and a pretty formidable offensive line on the part of Indy, that hardly seems possible to the extent that it would have a profound effect on the game.

But Rivers has not been an overwhelming presence in the pocket, with just ten TD passes, and truth be told, the schedule they have worked their way through has not been the most challenging in the NFL. Faced with a stern test last weekend, they failed against Baltimore, gaining a rather pedestrian 5.2 yards per play.

When observers (and we’re sure many BetAnySports patrons) look at this, they are considering that the Colts have been a premier team against the run, allowing just 3.3 yards per carry. And when you look at some of Football Outsiders’ metrics in terms of Second Level Yards and Open Field Yardage, they look like the league’s most difficult team to get big plays on in the run game.

Dalvin Cook was held very much in check in Week 2, which low lighted a lousy offensive effort by Minnesota where the Colts smothered Kirk Cousins as well. Cleveland has a good ground game, and did beat the Colts, but not because they were able to dominate in the trenches (3.8 ypc).

And of course the Titans rely heavily on the run (48% of plays), with Derrick Henry leading that charge.

When you look close at the worst teams at allowing TD’s in the red zone, you see some clubs you might find when the playoffs come around – Miami, Seattle, Green Bay, Kansas City, Baltimore, New Orleans. So it makes you wonder how critical that looms.

We’re going back and forth a little, aren’t we? Ultimately the little things make a difference here. And that includes the Colts’ ability to take Henry a little off his game; the fact that the Titans won’t be a constant pain in the ass for Rivers in the pass rush; the proposition that Tennessee might just a be a little overrated, based on their beatdown of Buffalo, which appeared flat in that quarantine-delayed game. Stuff like that.

Yeah, matchup-wise, I’m going to afford a slight lean to the COLTS.

BetAnySports produces a great Thursday night in the NFL, with reduced juice for better odds and Sports Betting Prime for real-time wagering……… They make a lot of payment options available. These include debit cards, credit cards, person-to-person transfers and the virtual currency of Bitcoin, which is fast and easy with their automated system, and NEVER incurs a transaction fee!