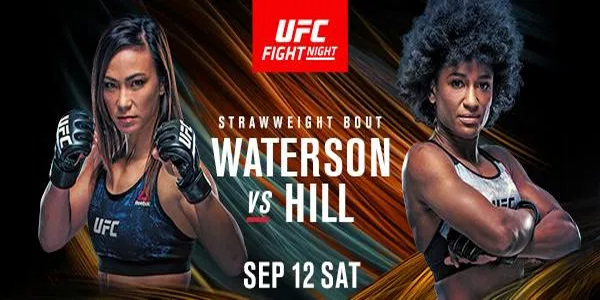 Another week, another UFC event, as Dana White keeps churning out broadcasts on ESPN+. This one is officially UFC Fight Night 177, unless you want to call it UFC on ESPN+ 35. Maybe you want to call it UFC Vegas 10. Whatever you call it, the main event now features Michelle Waterson vs. Angela Hill with the positive COVID-19 test for Glover Teixeira from September 3.

The women really do take center stage here, not just in the main event, but overall. There are four women’s fights listed on this card to go along with seven men’s fights from the UFC APEX training facility in Las Vegas.

We’ll break it all down for you with odds from BetOnline Sportsbook and a little extra detail on the main card bouts. The entire card will be on ESPN+.

Action begins in the women’s flyweight division between Sabina Mazo and Justine Kish. Mazo is a big -241 favorite in one of several fights expected to go close to the distance on this card. The over 2.5 is juiced at -325. Kish is +206 to win her second fight in a row. She beat Lucie Pudilova after almost two years away from the sport. She won 30-27 across the board and looked revitalized after the long layoff, but Mazo, a former LFA champ, is a step up for Kish. She’s 8-1 with her only loss in her UFC debut against Maryna Moroz. The 23-year-old should win here, but the price is a little steep.

Anthony Ivy is more than a $2 underdog in his fight against Bryan Barberena. Barberena checks in at -260 in this welterweight bout. Barberena needs a win here with losses in three of his last four fights, but Ivy is not on the level of guys like Vicente Luque, Randy Brown, or Leon Edwards. The line tells you that. Ivy lost his UFC debut in the first minute against Christian Aguilera back in June. Barberena will be a good money line parlay piece paired with something else on the card to cut down the juice.

Frank Camacho is -221 against Brok Weaver, who comes in at +186 with an ugly loss to Roosevelt Roberts last time out. On the other hand, Camacho has lost four of his last five fights, including a loss 41 seconds into his fight against Justin Jaynes back in June. The 31-year-old Camacho could very well be out of the UFC soon and maybe after this fight if he doesn’t show well. There are better parlay pieces and better fights down the board to be sure.

Alan Patrick and Bobby Green look ripe for a decision with a total of 2.5 juiced at -245. Green is the -251 favorite to win the fight over Patrick, who has not fought since October 6, 2018. Green has had a really nice 2020 with wins over Clay Guida and Lando Vannata, both by decision. Each of the last seven fights for Green has gone the distance, hence the heavy over juice. Patrick hasn’t fought in so long that it probably doesn’t matter, but three of his last four have gone 15 minutes. Green by decision makes the most sense here, as you have to wonder about Patrick’s gas tank with nearly two years away at 37 years old.

Amazingly, that previous fight isn’t the most likely to go to decision among the men’s fights. It is this lightweight fight between Roosevelt Roberts and Matt Frevola. Frevola’s last three fights have gone the distance, but each of the last two for Roberts have ended in submissions with one win and one loss. Roberts is the -119 favorite and Frevola is the -101 underdog with the over 2.5 juiced up to -270. Roberts has beaten inferior competition lately and Frevola seems to be about his equal, but the early influential money has come in on Roberts. He is the longer fighter and size has mattered at the APEX, which is a smaller Octagon than the standard. He does deserve the nod, but this is not a fight I’d be excited to bet.

Julia Avila has looked good in her two UFC fights. She beat Pannie Kianzad in her debut at UFC 239 and then stunned Gina Mazany with a first-round knockout just 22 seconds in back on June 13. Here she’ll square off against Sijara Eubanks, who beat Sarah Moras by decision back on May 13. The 32-year-old Avila is -300 in this fight, which has been influenced by her most recent fight, but Eubanks is just 6-4 in her MMA career and has dropped two of three. Eubanks was supposed to fight Karol Rosa last weekend, but Rosa had issues with the weight cut. Avila’s scheduled opponent last week, Nicco Montano, tested positive for COVID-19. Both fights are making a late change, but Avila is the one to pair with Barberena on a parlay that’ll pay around -118.

Matt Schnell and Tyson Nam will send us into the main card. Nam has been bet to a -118 favorite with the early action on this flyweight fight. Nam has 10 knockouts to his name, which is a good number for a flyweight. He won his first UFC fight last time out with one of those knockouts over Zarrukh Adashev. Schnell is more of a known commodity with a lot more UFC experience, but Nam has gotten the early action and that stands out about the 36-year-old. Schnell’s last three fights have ended in a first-round stoppage. Under 2.5 at -120 is my favorite pick here. The smaller Octagon increases that chance as well.

BET ON UFC VEGAS 10 & GET A WELCOME BONUS AT BETONLINE!

You basically have to bet somebody with the name Quarantillo in 2020, right? Billy is the favorite here at -220 against Kyle Nelson in the featherweight division. By the time this one gets going, Nelson will have gone 357 days between fights. He knocked out Polo Reyes in easily his best UFC appearance to date. He’s 1-2 in the UFC now after that win. Quarantillo has improved to 14-2 in his career with two UFC wins, but he hasn’t really fought anybody of value in Jacob Kilburn and Spike Carlyle. Neither guy has had a UFC appearance since.

Quarantillo is the much more aggressive striker between the two and the smaller cage dimensions should probably help him in this fight. It should also help the under, which is priced a little strong at -145, but that is probably justified. All three of Nelson’s UFC fights have ended in a stoppage.

Another big favorite here as Mike Rodriguez takes on Ed Herman in the light heavyweight division. Herman had a resurgence in 2019, as the now 39-year-old beat Patrick Cummins and Khadis Ibragimov to improve to 26-14 in his career. This will be his first fight in 2020, which could be part of the reason why the line is so high. Herman lost his three fights before the two wins, which is probably another contributing factor. He’ll turn 40 on October 2 and has a lot of fight miles to his name.

It is hard to figure of what Mike Rodriguez is. Since his win over Jamelle Jones on one of the earliest Dana White Contender Series broadcasts, Rodriguez has cone 2-2-1 in UFC. He lost to John Allan, but Allan tested positive after the fight and the loss was taken off of Rodriguez’s ledger. He did have an impress win over Marcin Prachnio last month and maybe that is the springboard that he needs.

Still, this line looks too high. Herman may not be in his prime anymore, but he’s got a lot of fight IQ and Rodriguez hasn’t fought many veteran fighters.

No, that isn’t a typo. This line implies that the fight goes the distance 80% of the time. It is extremely challenging to handicap Roxanne Modafferi. She scored that huge upset win over Maycee Barber back in January, but we did come to find out that Barber tore her ACL during the fight. Modafferi followed up that huge win with a loss to Lauren Murphy in a fight that was not very competitive back in June.

Andrea Lee also has a loss to Murphy on her resume. That came at UFC 247 in February before everything shut down. About the only certainty here is that the judges will be needed. The last five fights for Lee have all gone to decision in her UFC career. Five straight have gone 15 minutes for Modafferi and two of her TUF 26 fights went the distance in the semis and the finale. This price is a little high for Lee, but she likely wins and does so by decision. There are better fights to bet on.

Undefeated Ottman Azaitar will put that unblemished record on the line as an underdog against Khama Worthy. The money has been very one-sided on Worthy to this point. Azaitar knocked out Teemu Packalen in his UFC debut in what represented a big step up in class following more than a year on the sidelines. Eleven of Azaitar’s 12 fights have ended in a stoppage.

Yet, he isn’t getting a lot of love here against Worthy. The 33-year-old has gone 2-0 since joining the UFC with wins over Devonte Smith and Luis Pena. Worthy is the bigger fighter in the smaller cage and that is probably part of the handicap here. Also, Packalen is just 1-3 in his four UFC fights and that was his first fight in 30 months. The move on Worthy looks legit and very sharp in nature and I won’t disagree with it.

Michelle Waterson and Angela Hill meet in the main event of UFC Vegas 10. The 34-year-old Waterson has lost her last two fights, both by decision. She lost to Joanna Jedrzejczyk and Carla Esparza. There is no shame in either one of those losses. Waterson was originally supposed to fight Hill three weeks ago, but the fight was pushed back by Waterson for personal reasons. She’s ready to go now, though.

Angela Hill is coming off of a loss of her own to Claudia Gadelha. It stopped a three-fight winning streak for Hill, who is just 12-8 in her career. She was 6-2 when she joined the UFC, so she’s been a .500 fighter. Waterson has a strong ground game with nine career submissions. Hill needs to win by decision. She’s had a couple of knockout wins in the UFC, but only has five stoppage wins to her name. If Waterson can control the ground, she can control and win the fight that is expected to go 25 minutes. The mild upset is the pick here.

Odds On Where Will Giannis Antetokounmpo Play Next Season?