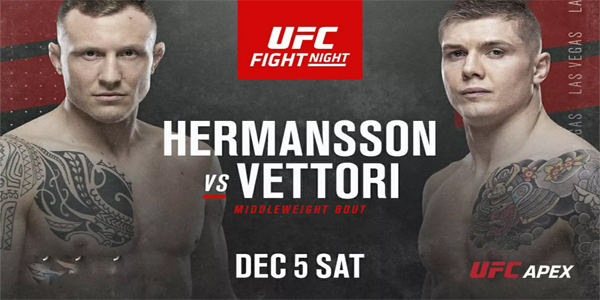 Last week’s UFC card was shortened a bit because main event fighter Curtis Blaydes tested positive for COVID-19. Devin Clark and Anthony Smith fought in the main event and it wound up one of the most important wins of Smith’s career to get back on track.

This week, the main event has changed hands a few times. Jack Hermansson was originally supposed to fight Darren Till, but then Till became Kevin Holland. Holland then tested positive for COVID-19 at the end of November, so now Marvin Vettori slots in.

With a lot of moving parts once again as COVID rages on in Nevada and around the United States, we’ll take a little bit of a later look this week at UFC on ESPN: 19 from the UFC Apex training facility in Las Vegas.

Hermansson vs. Vettori headlines a card with 11 scheduled matches. Hopefully they all go off as scheduled.

Odds are from BetOnline Sportsbook for the Saturday December 5 fight card.

Gian Villante seems like an uncomfortably large favorite against Jake Collier with three losses in his last four fights. Villante had fought to a string of split decisions before losing his last two matches by stoppage. Maurice Greene got him by submission back in June. Collier returned from more than a 2.5-year layoff to fight Tom Aspinall back in July. He was knocked out in 45 seconds. There is no telling whether or not Collier, who was making his heavyweight debut, will be in better form or not, but it looks like we’d have to lay the big Villante price if anything.

Undefeated Ilia Topuria bested Youssef Zalal on October 10 in his UFC debut to improve to 9-0. He’ll look to move to 10-0 here against Damon Jackson, who got his UFC shot back on September 19 and scored a submission win over Mirsad Bektic. Before locking in the guillotine choke, however, Jackson was losing the fight, as Bektic was the more aggressive fighter and had more control of the fight. Topuria’s line may appear high because Jackson beat a known fighter in Bektic, but that fight would have gone the other way in all likelihood had Round 3 been completed. Topuria it is, with the chance at plugging him into a parlay down the line.

Cody Durden’s UFC debut was fought to a draw against Chris Gutierrez back on August 1. Durden was a huge underdog in the fight, which came with about a two-week turnaround. He did well to fight to a draw. Now he matches up with Jimmy Flick, who impressed enough on the Dana White Contender Series in September to get a shot on this card. Flick has locked in 13 submission wins, so top control will be important in this flyweight fight. Durden had very little success with takedowns in the first fight, which would make it tough for him against Flick in this fight.

If it feels like you haven’t heard the name Matt Wiman in a while, it’s because you really haven’t Wiman fought twice last year after going more than 4.5 years without a fight in the UFC. Wiman lost both 2019 fights and finds himself a huge underdog here to undefeated Jordan Leavitt. The 25-year-old Leavitt is 3-0 in 2020 already and beat Luke Flores on August 4 on the Dana White Contender Series to get a full contract. Leavitt fought on short notice and won easily and appears to have a really strong submission game in the lightweight division. He’s a good parlay piece with Topuria.

Jose Quinonez will look to get back in the win column after dropping his UFC 248 fight to Sean O’Malley. Quinonez has never lost consecutive fights. His 9-4 record isn’t overly impressive, but he’s lost to legit competition in his career. Louis Smolka would classify as a legit fighter. The 29-year-old is in a similar spot as Quinonez with losses in two of his last three fights. Smolka is more of a finisher than Quinonez, which probably gives him the upper hand in the smaller UFC Apex Octagon, even with a total heavily juiced on the over.

BET ON UFC AT BETONLINE SPORTSBOOK

How dangerous is Movsar Evloev? Nate Landwehr has actually been pretty decent since making the leap from M-1 to UFC. He did lose by first-round knockout to Herbert Burns in a back-and-forth first round, but bounced back to beat Darren Elkins by decision last time out. Evloev, who was also in M-1, has won all three of his UFC fights by unanimous decision. He has seven wins by decision in his career. He’s not a big featherweight, but his wrestling and technical skills are remarkably impressive. Landwehr hasn’t really fought a lot of guys like him and this feels like a fight where his hubris will frustrate him into mistakes.

There isn’t much betting value, but there’s a reason Evloev is such a huge favorite.

We had a lot of questions about Roman Dolidze coming into his UFC debut. He hadn’t fought in over a year and a half. He was stepping way up in class from WWFC to UFC. Dolidze was a -160 favorite and won by first-round knockout. His price has been bumped a little bit here for the fight against John Allan. Allan, who hasn’t fought in over a year because of a positive test for Tamoxifen, was gaining steam, but now he’s been out for a long time. We’ll see how he bounces back here, but Dolidze is undefeated and a sizable favorite.

The one thing that will be interesting here is that Allan is susceptible to takedowns and submissions, but he’s been a KO artist in his career. Dolidze is also strong in the KO department. Under 1.5 looks like a worthy gamble at plus money.

The only women’s fight on the card comes from the flyweight division with Taila Santos as a favorite against Montana De La Rosa. If common opponents is your thing, De La Rosa beat Mara Romero Borella back in February after Santos lost to her the previous February. That is the only loss of Santos’s career. She went 15 months between fights and beat Molly McCann in her return match by very convincing unanimous decision.

Santos seemed to rely more on her wrestling and strength in that fight. We’ve seen De La Rosa struggle at this level to have as much success on the ground as she had on her way to the UFC. It is hard to keep looking at chalk in these fights and this is one that could go either way, but Santos is a better version of De La Rosa.

Justin Jaynes was going to lose his last fight to Gavin Tucker. It was just a matter of how. Tucker had won the first two rounds pretty convincingly and finally finished it in the third by rear naked choke. That was the second career UFC fight for Jaynes, who beat Frank Camacho by knockout just 41 seconds into his first bout. It was the first time that Jaynes was finished in his career.

Interestingly enough, the total is juiced -130 on the under 2.5 here when Jaynes takes on Gabriel Benitez, Benitez has dropped his last two fights and is only 5-4 in the UFC. He isn’t nearly as active as he previously was, but he is still in a big favorite role here. With 17 finishes out of his 21 wins, the suggestion here is Benitez by finish, but I’m not so sure. Maybe Jaynes would have eventually lost to Camacho if the fight went longer, but he is a versatile fighter with a good opportunity to have multiple paths to victory here. This fight should have shorter odds in my opinion.

Ovince Saint Preux remains a big name in the sport of mixed martial arts. This would be a huge win for Jamahal Hill, who returns after a six-month suspension for cannabis. Hill is technically 8-0 after his win over Klidson Abreu, but that KO victory was overturned following the positive test. This is a massive step up in class for the undefeated Hill, as the line would imply. While OSP isn’t the title contender he once was, his September 5 win over Alonzo Menifield showed that there is still something left in the tank. It was a good bounce back effort to his loss to Ben Rothwell back in May.

In a lot of ways, this could be a passing of the torch fight in the light heavyweight division. Hill is one of the better prospects the division has seen in a while and OSP is 37 years old. It would be hard to give this fight to the very active fighter in Hill that easily, though. OSP’s wrestling and grappling has been well-documented throughout his career. We haven’t seen Hill tested like that. If anything, I’d lean with the wily vet over the guy coming off a suspension for the biggest fight of his career.

This line just keeps running away from Jack Hermansson. As mentioned in the intro, two different opponents were set for Hermansson, but now he gets Marvin Vettori. The 32-year-old Hermansson needed 78 seconds to get Kelvin Gastelum to tap back in July, so we didn’t get to see how he really looked coming off of the Jared Cannonier setback last September. The fact is that we don’t have a lot to go on in general with Hermansson. He was great against an aging Jacare Souza in April 2019. Otherwise, we haven’t seen him in many brawls.

Vettori does have finishing ability, but he’s more of a decision guy at this level, including the 15 minutes he went with Israel Adesanya in 2018. Hermansson’s wins have more name value attached to them, but the 27-year-old Vettori has been a tough nut to crack. The line movement is probably right here, as the sharp side seems to be Vettori the closer we get to the fight.