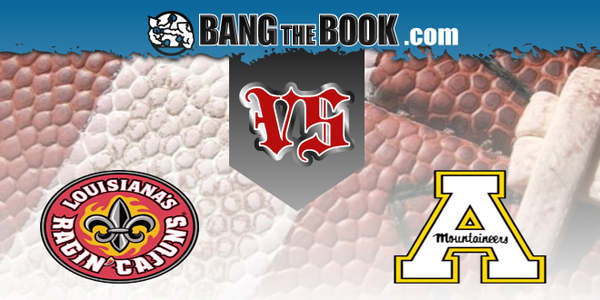 Nobody would fault the Louisiana Ragin’ Cajuns for treating Friday night’s game against Appalachian State like it’s the Super Bowl. Even though Louisiana has already secured a spot in the Sun Belt Championship Game against Coastal Carolina on December 19, revenge is a dish best served in cold and rainy Boone, NC in the minds of Billy Napier’s team.

With rain and wind in the forecast, the total for this game has come down from 53 to as low as 51 and the spread reads Appalachian State -3 at plus money or App State -2.5 at varying juice across the board.

Let’s break down both teams and see if we can find a bet on this one.

The Ragin’ Cajuns have won eight of their nine games, but have only covered the spread four times. Like App State, a lot of big lines have come their way in Sun Belt play. All five ATS losses for Louisiana have been as a favorite of nine or more points, including the game against Coastal Carolina in a 30-27 loss as a nine-point favorite.

Louisiana has been a very strong team on both sides of the ball this season. You can poke holes in their schedule and also point to the 70 points that they hung on rival Louisiana-Monroe last weekend, but the Ragin’ Cajuns have outgained the opposition by an average of 1.8 yards per play on the season. That kind of performance has Billy Napier’s name coming up for some bigger jobs for next season and there are some vacancies that he has been linked to already.

Weak schedule or not, Louisiana is 21st in the country in yards per play with 6.65. They are 14th in the nation in YPP allowed at 4.83. This has been a dominant team through 10 games.

We mostly think of Louisiana as a running team with the three-headed monster of Elijah Mitchell, Trey Ragas, and Chris Smith. It’s a fair statement, as the Ragin’ Cajuns have rushed for 5.8 yards per carry, led by Mitchell with 6.0 and seven touchdowns. Levi Lewis has a 16/7 TD/INT ratio to keep defenses honest with a 62.3% completion percentage. He’s also scrambled for 6.3 yards per pop and five touchdowns.

Louisiana did allow 5.75 YPP against Coastal Carolina, which was their worst defensive performance of the season, but Coastal also had a 38-22 edge in time of possession and ran 72 plays to just 55 for Louisiana. Coastal was 9/15 on third down and that was the game. If Louisiana gets off the field here, they should be in good shape.

Is App State vulnerable? In a lot of ways, this feels like the weakest team we’ve seen in Boone in a few seasons. First-year head coach Shawn Clark won’t be using the job as a springboard like Eli Drinkwitz did to take the job at Missouri. Scott Satterfield, who was at App State for a long time and oversaw the transition to Division I-A, is now at Louisville.

While continuity may have been a big factor in the Clark hire, the Mountaineers have lost to the two best opponents that they have faced. They lost at Marshall by 10 as a 6.5-point favorite and then lost getting three points at Coastal Carolina. The Chanticleers did score on a pick six to end the game, but Coastal also had a big yards per play edge in the game, so it wound up being a pretty fair final score.

Still, while we can sing the praises of Louisiana for their YPP differential, App State is 31st in YPP on offense with 6.37 and 21st on defense with 5.00, so they’ve also looked the part in that department. App State’s offense isn’t quite as explosive on the ground or through the air, but the same methodical approach fits the Mountaineers. Zac Thomas has completed 66.7 of his throws with a 17/8 TD/INT ratio. App State has rushed for 5.6 yards per carry with a two-headed monster of its own in Camerun Peoples and Daetrich Harrington.

The App State defense allowed 5.98 yards per play over the games against Marshall and Coastal Carolina. Otherwise, they’ve played the role of bully, though App State is just 2-7 against the spread. The Mountaineers, like Louisiana, have struggled to cover in big favorite roles. That wasn’t the case last week in a beatdown of Troy to right the ship after that Chanticleers loss.

We simply don’t have a lot of data points against good teams for either one of these squads, but the ones we do have, Louisiana has fared better. The Ragin’ Cajuns did lose to Coastal Carolina, but that was more about a clock control thing, as Louisiana moved the ball well when they had it and just couldn’t get off the field on third down.

With revenge on the brain and App State in what seems like something of a vulnerable spot, Louisiana is the pick. If you can’t get +3 at reasonable juice, go ahead and take the money line.