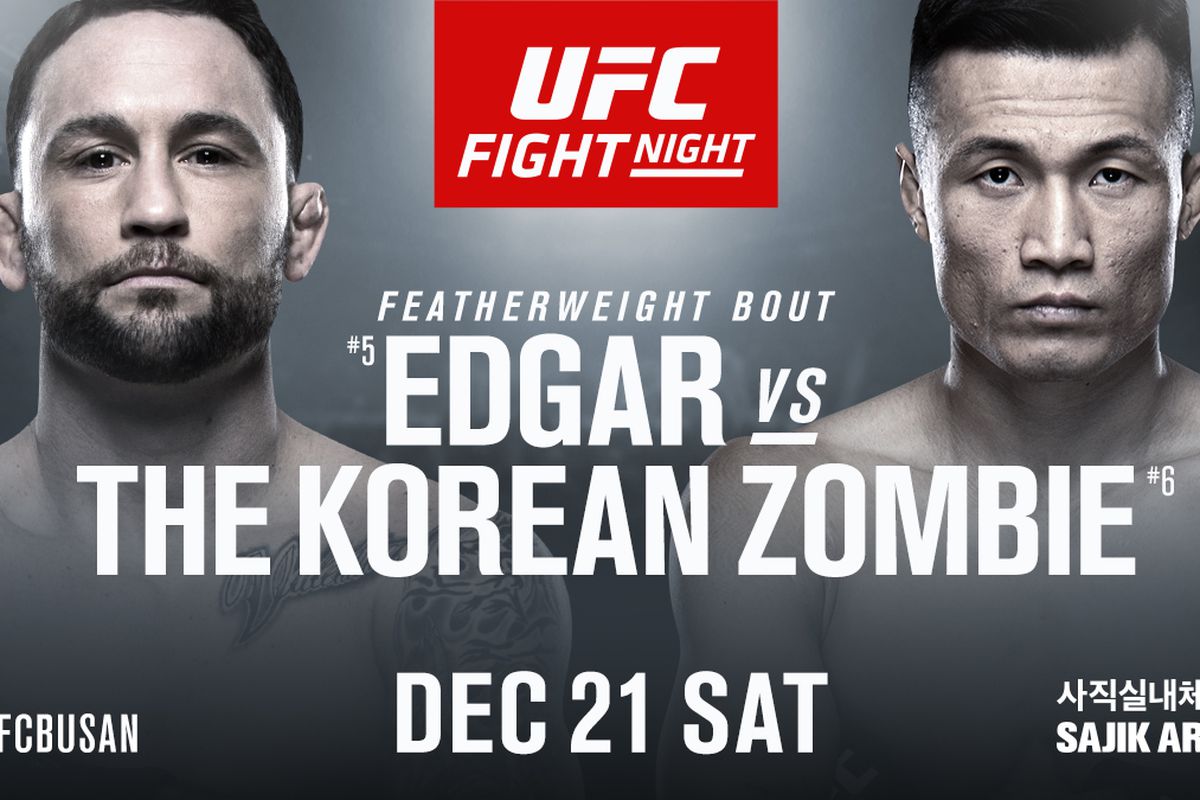 UFC 245 was everything that we wanted and more. Two of the three champions held onto their titles and we had a changing of the guard in the featherweight division with Alexander Volkanovski over Max Holloway. We also swept the board with our main card picks last week and scored a nice underdog suggestions on Irene Aldana, who won by first-round KO.

Let’s see if we can do the same this week with the final event of 2019 out in Busan, South Korea that features a main event of The Korean Zombie vs. Frankie Edgar. This is known as UFC Fight Night: Edgar vs. The Korean Zombie and also UFC Fight Night 165 and UFC on ESPN+ 23. Maybe a New Year’s resolution for the promotion will be to streamline the names of these fights cards.

There are a ton of matches on here and a lot of Asian fighters, as you would expect. This fight was billed as Brian Ortega vs. Chan Sung Jung, aka The Korean Zombie, but Ortega has a knee injury. Frankie Edgar, who was supposed to fight Ortega back at UFC Fight Night 139, takes his place. That is the most notable of a few fight changes for this card.

We start in the men’s bantamweight division with a matchup between Alateng Heili and Ryan Benoit. Benoit is very much coming off the shelf in this one with more than two years away from the UFC. That hasn’t stopped him from being a favorite, but he is only -120 against Heili, who is fighting for just the second time in the UFC. Way too many unknowns to get involved in this coin flip.

Miranda Granger puts her undefeated record on the line against Amanda Lemos at 115 pounds in the women’s strawweight division. The 27-year-old won her UFC debut back in August over Hannah Goldy by unanimous decision and is -185 to take down this fight as well. Lemos hasn’t fought in 2.5 years since losing to Leslie Smith in her UFC debut. Originally, Lemos was set for a return against Veronica Macedo. She would have lost that one, too.

Said Nurmagomedov takes on Raoni Barcelos in another coin flip fight on this card, as Barcelos is -115 to pick up another win in the UFC. So far, Barcelos is 3-0. Nurmagomedov is 2-0. These are two really interesting prospects. Barcelos is already 32, but he has some very good striking power within this division. Nurmagomedov probably has more to gain here given his age and his most recent knockout of Ricardo Ramos ended a long string of fights without one. This looks like quite the toss-up and it is hard to pick a winner here.

Alexandre Pantoja is a lofty -230 favorite in flyweight action against Matt Schnell. Schnell has rattled off four straight wins, including two in 2019. Pantoja is coming off of a loss to Deiveson Figuriedo. He needs a bounce back effort here and it looks like he has a pretty good opponent for that given the odds. Pantoja is definitely more accomplished in this division and has fought stronger competition. That’s why the line is high and Pantoja deserves this type of price in a bounce back spot.

Dong Hyun Ma is another of several Asian fighters on the card. He’ll enter the Octagon as a big underdog to undefeated Venezuelan Omar Morales. The 34-year-old Morales got a look on Dana White’s Contender Series and was impressive in a win over Harvey Park. It was good enough to give him a look here. Ma has lost two straight fights, both by knockout, and the most recent one by doctor’s stoppage. He’s taken a lot of abuse lately and Morales has the chance of a lifetime. It has to be Morales, even at -190 with his relative inexperience at this level.

We’ve got a few big lines in succession on this card and this is one of them with Seungwoo Choi and Suman Mokhtarian. Choi is 0-2 in his UFC efforts against Movsar Evloev and Gavin Tucker, but this is set up for the 27-year-old to have a big performance in Korea. Mokhtarian has an impressive 8-1 record, but he has fought on very small local circuits and got knocked out a year ago in his UFC debut. He could very well get knocked out here, too.

Ciryl Gane is -650 against Tanner Boser in heavyweight action. It is about time for Gane to step up in class. He’s 2-0 in the UFC with a couple of submission wins. He is 5-0, all by stoppage. Boser is a veteran of 23 fights, but only one UFC fight. He beat Daniel Spitz a couple months ago by decision. Gane will win this and will hopefully get more opportunities in the New Year.

Another big favorite here as Kyung Ho Kang is -255 against Liu Pingyuan. Since returning in 2018, Kang is 3-1 in his UFC fights, with a 2-0 record this season against Teruto Ishihara and Brandon Davis. We haven’t seen Pingyuan since he lost in July to Jonathan Martinez by knockout. It was Pingyuan’s first loss in more than six years, so taking a step back makes some sense.

Kang is just the better all-around fighter here. You also have Pingyuan looking to bounce back, but he also has to feel vulnerable after that Martinez loss, as he took some punishment in that one.

This looks like a pretty interesting fight from the odds, but you have to wonder if Jun Yong Park is getting too much respect. Park’s UFC debut came back in August and he tapped out against Anthony Hernandez. On the other hand, Marc-Andre Barriault is 0-2 in his UFC career with losses to Andrew Sanchez and Krzysztof Jotko. Barriault was thought to be a pretty good prospect after holding the TKO strap in the middleweight division, but he has been a disappointment so far.

That perception seems to be fueling this line. Barriault fought a couple of decent middleweights. Park wound up being Hernandez’s first career UFC win after a loss and a draw. You really have to feel like the third fight for Barriault, and the last on this contract, is one that he would be set up to win with a lack of Canadian fighters in the sport. This line looks light for a variety of different reasons.

This should be a great fight and possibly one of the best on the card. Da Un Jung and Mike Rodriguez are not that far away from being a coin flip in this fight with the American at -120. Both guys have eight career knockouts, so this should be a good striker vs. striker contest. Rodriguez is 1-1 officially in UFC, as the outcome against John Allan back in July was overturned. Rodriguez was one of the earliest Dana White Contender Series finds and now he starts a second set of fights.

Jung won his debut fight in very impressive fashion with a third-round sub of Khadis Ibragimov. That was the first career loss for Ibragimov, who came over with a lot of promise from M-1. The loss to Ed Herman may have discredited Jung’s win a little bit in the minds of UFC bettors, but Herman is also a long-time veteran of the sport and that was a spot in which Ibragimov’s inexperience came back to hurt them. That shouldn’t reflect negatively on Jung, who is my pick to get the win here.

Let’s see how Charles Jourdain responds. He got a long-awaited UFC shot and failed. He lost to Desmond Green in a unanimous decision back in May. The Canadian fighter had won four in a row prior to that. We have not seen Dooho Choi in a while, but his resume of opponents is far more impressive than Jourdain’s. Choi last fought Jeremy Stephens and lost back in January 2018. prior to that, he fought twice in 2016, including a loss to Cub Swanson.

It is fair to have questions about Choi. We’re talking about almost two years on the shelf to take on a young, fast, athletic fighter. We do have an experience mismatch here, which is sort of the theme of the card. This is a great opportunity for Jourdain to line up against somebody that has fought some of the sport’s best, but may be a little bit rusty. If Jourdain is aggressive, he can pull this off. If he waits back, Choi probably uses his knowhow to win.

This is the hardest handicap on the card. Volkan Oezdemir really stepped up in class in 2018 and 2019 and it didn’t go as well as hoped. He lost a title shot to Daniel Cormier. He then lost to Anthony Smith and Dominick Reyes. His August win over Ilir Latifi might have been the most important fight of his career because four straight losses could have put him in a tailspin.

Aleksandar Rakic is one hell of a prospect. Four UFC fights, four wins. The last two by knockout. But, like what we saw for Oezdemir in 2018 and 2019, success brings better opponents. This is the best opponent by a large margin for Rakic in his career. Nothing against Jimi Manuwa and Devin Clark, but Oezdemir is in another tier. This is a huge fight for Rakic, who certainly has the potential and athleticism to win one like this, but I have to look at Oezdemir until Rakic proves it to me. The way that Oezdemir couldn’t.

The main event of the evening comes in the featherweight division with Frankie Edgar against The Korean Zombie. This is Edgar’s first fight since going 25 minutes with Max Holloway back at UFC 240 in the main event. Edgar has never lost to somebody that went a whole career without a title shot. He only loses to upper-echelon fighters. Edgar’s losses are Gray Maynard, Benson Henderson, Jose Aldo, Brian Ortega, and Max Holloway. Is The Korean Zombie on the level of those guys? Some would say that he is. Time will tell.

The 32-year-old Jung also has a loss to Jose Aldo on his resume. He also lost to Yair Rodriguez with one second left last year in a fight that he would have won. TKZ took an extended layoff from MMA after the Aldo loss at UFC 163. After the Rodriguez loss, he responded to beat Renato Moicano in less than a minute. We’ll see what he has in store here against Edgar. Suffice it to say that he is happier to see Edgar than Ortega, who is missing this fight because of a torn ACL.

Edgar has never tapped out, so this fight is very likely to go to a decision. It seems hard to see Jung losing a decision in this one, which has to be factored into the handicap.