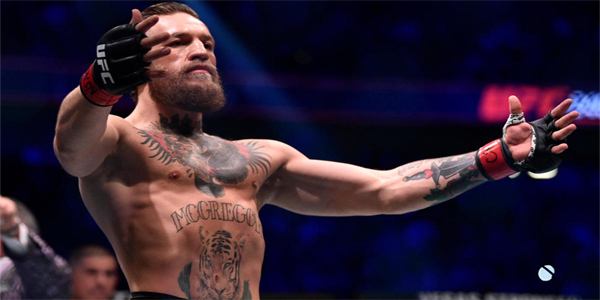 BetOnline knows that you like to watch mixed martial arts. And if you do, there’s a pretty good chance that you will either love or hate Conor McGregor. The biggest crossover star in MMA will be back in action for the first time in over a year when he faces Dustin Poirier at UFC 257, which takes place in the Etihad Arena in Abu Dhabi.

As far as the “side” is concerned, McGregor is the solid favorite:

And here is the over-under in rounds:

But it doesn’t end there; you’ve got a full selection of wagering options available with props, and there is no doubt in our mind that they’re going to keep your interest throughout the event, which can be seen on UFC pay-per-view through ESPN+.

For instance, there is a -200 price on McGregor to win this fight inside the distance. In the way of background information, these two fought back in September of 2014, with McGregor winning on strikes in the first round. In other words, he scored a TKO.

Poirier rehabilitated his career after that fight, eventually winning an interim lightweight title that he relinquished when he sustained a submission defeat to Khabib Nurmagomedov at UFC 242. He is +400 to capture a victory before the final horn. In this three-way prop, the “decision:” is priced at +300.

And by the way, you can also bet on the fight NOT going the distance, regardless of what the final result turns out to be, but you have to lay 4-1 (-400).

And you want to get VERY exact about things, BetOnline has a way for you to do that too.Here is that list, with falls under the category of “Method of Victory”:

Notice that McGregor offers a -200 price to win by the same avenue through which he captured the previous win over Poirier. In his 22 victories as a pro, Conor has only one submission, and this prop is pretty much priced accordingly for that outcome (+2500). Poirier has seven submission wins; he is listed at +1000 for that.

There is “round betting” as well, and actually two different ways you can do it. For instance, you can bet on McGregor to win in Round 1, and you’ll get a price of +170. But then you can break it down to an exact result in that round. So McGregor is +175 to win by KO, TKO or DQ (that’s disqualification) in the first round. And he is +5000 to register a first-round submission.

This can be done for both fighters for both of those variations of results, for each of the five rounds.

You may not even have an opinion on who will win the fight, but only how far it will actually go. And you’ll be accommodated. Maybe there’s some confusion when a guy quits on his stool? They can clear up all of that.

Will that next round start? Here’s a prop for you:

Looking at those numbers, you’ll have to consider whether it makes more sense for you to bet the +250 on the Round 5 “Yes” or just take +300 on the distance prop. It depends on what you feel works better. Also keep in mind that McGregor has been in the Octagon for exactly 40 seconds of action in the last 15-1/2 months.

BetOnline comes with odds and props on all the fights on UFC 257, and all major MMA events, period! …….Don’t forget that you can take a look at Odds Boosters every day for great payouts on pre-selected parlays, and you’ve got every way imaginable to open up an account, including crypto-currencies like Bitcoin!