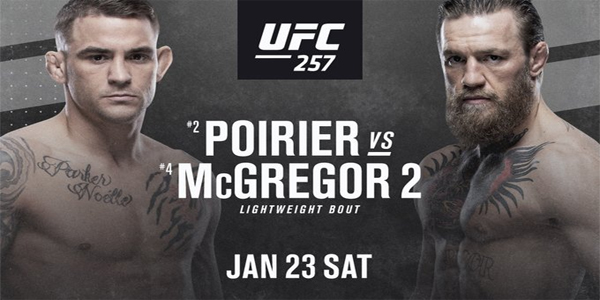 Are the stakes high for Conor McGregor as he prepares to face off against Dustin Poirier in UFC 257? Sure they are. After all, he is the most bankable star in the sport of mixed martial arts today.

He is also the guy with the most crossover appeal, and a further exploitation of that may be just ahead.

McGregor is said to be in talks for another boxing event. Obviously you know already that he went ten rounds with Floyd Mayweather before being stopped. And now he may be on the verge of making a deal to fight Manny Pacquiao.

We’re not sure that losing to Poirier would kill that showdown, but it might take a little of the luster off it.

Saturday night’s fight takes place in Abu Dhabi and is being shown through pay-per-view for those who can get it through the ESPN+ app.

At BetOnline, McGregor is the solid favorite:

There are also a host of props available to bet on this fight, so it’s well worth taking a look!

A fight with McGregor might really hit the “sweet spot” as far as that is concerned.

And greasing the wheels to make this fight happen might be easier now that Pacquiao and McGregor are working with the same management company.

So you can slot a fight with Pacquiao, a proven PPV commodity, in between those numbers.

At a recent press conference, McGregor made a great point, in that since Khabib has officially announced that he has retired from mixed martial arts competition, and has denied any reports that would suggest otherwise, the fight with Poirier should be declared for the vacant UFC lightweight title.

Dana White has not gone so far as to rule that title vacant, which in effect would involve him stripping Khabib of the title, Perhaps he is hopeful that there can be a rematch. Khabib scored a fourth-round submission over McGregor in that previous meeting.

In fact, he has said that after a closed-door meeting with Khabib just recently, the champ told him that if either McGregor or Poirier did something “sensational,” he would consider coming back. And Khabib denied that. He seemed to be clear before that he was not interested in fighting any longer after his father died.

McGregor has a record of 22-4, with 19 knockouts, one submission and two decisions. Poirier, who had held the interim lightweight crown until losing to Khabib for the “real” title, is 26-6 with one no contest, 12 knockouts, seven submissions and seven decisions. He is a black belt in Brazilian Jiu-Jitsu, while McGregor is a brown belt, but a very capable striker.

BetOnline comes with odds and props on all the fights on UFC 257, and all major MMA events, period! …….Don’t forget that you can take a look at Odds Boosters every day for great payouts on pre-selected parlays, and you’ve got every way imaginable to open up an account, including crypto-currencies like Bitcoin!