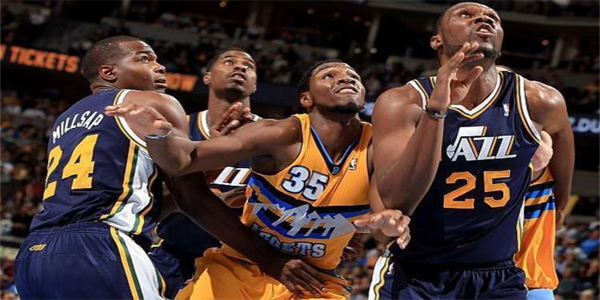 The Denver Nuggets (46-27 SU, 33-36-4 ATS) did a great job last season, and got to within a whisker of taking a trip to the Western Conference finals. More sure of themselves this season, they are the third seed among an extremely competitive group of teams. The Utah Jazz (44-28 SU, 34-36-2 ATS) had to get past some tumult that came as a result of being the “triggers,” more or less, of a lot of the shutdowns that happened across the sports world, as Rudy Gobert got infected with the coronavirus and then turned around and infected Donovan Mitchell.

The Nuggets and Jazz get together in a Western Conference quarter-final that is very competitive. At BetAnySports, the Nuggets are the favorites in the best-of-seven:

Will Barton and Gary Harris have been out of action, and we’re not sure when they’re going to be able to play.

The Nuggets, at this point, are about size. And that’s a good thing, because they have the center with the most all-around talent. Nikola Jokic knows all kinds of ways to score, and in addition to that he makes others better. Remember that there are few pivot men who can be the focal point of an attack. He’s on the short list.

Michael Porter Jr., who had been considered fragile and something of an underachiever, is coming of age. Porter, a 6-10 forward, has the skills to create matchup problems for opponents out on the perimeter. And that is exactly what he has done in the seeding games, tallying better than 22 points per contest. We know that Gobert is a superb defender in the middle, but who’s going to be hassling Porter on the perimeter?

We’re not exactly sure what Bol Bol will bring to the table, because he has played only a handful of NBA games, but he has exhibited some flashes of brilliance and has incredible skills. He might be able to supply some quality minutes up front.

That might counteract much of Utah’s strength, as BetAnySports patrons might agree. The Jazz genuinely lost some scoring power with the injury to Bojan Bogdanovic, who averaged 20 points a game. Sure, the Jazz can get points on board with Mitchell, and the former Louisville star has indicated that he is ready to assume more of a leadership role. But there will have to be more people stepping up.

You’d have to wonder whether Utah tanked it a little in the seeding games. They seemed to want to avoid having to play Houston, which has eliminated them the past two seasons and can extract a matchup edge with their smaller, quicker lineup.

Well, Denver’s going bigger than that – much bigger, in fact – but they still swept three games from the Jazz in the regular season, and a big part of that was the inability to keep Jokic under control. The Nuggets’ center averaged 29.3 points, a dozen rebounds and nine assists against Utah this season. And now that Porter is asserting himself a great deal more, that spells nothing but double trouble. Jamal Murray worked at a steady pace (off an injury) to get himself up to game speed.

No, there may not seem to be a lot of value here, but the Jazz went into the bubble kind of disjointed and we wonder whether they have shown much to disprove that. Yes, Denver may be without a couple of rotation players (for the time being), but they should still be able to make depth work. And if they have to use Torrey Craig as a starter, it represents an upgrade on the defensive end.

The Nuggets will get by this round, although -190 isn’t the biggest bargain.