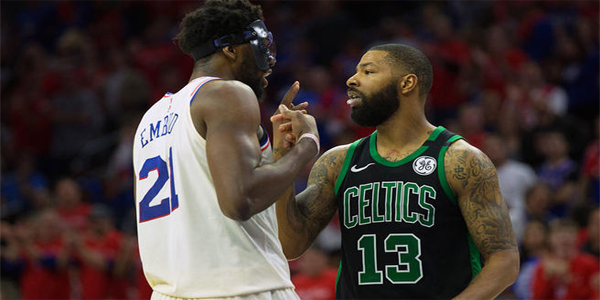 Ideally, the Boston Celtics could be contending for the Eastern Conference title, largely because of the great balance in the lineup, and the ingenuity of coach Brad Stevens. But they may not be a complete team, and the deficiencies up front may be what spells the end eventually. BetAnySports customers know that they could be somewhat vulnerable as they begin their East quarter-final series against the Philadelphia 76ers, who, if nothing else, have the possibility of being superior on the inside.

It sure wasn’t a bad thing that they rid themselves of Kyrie Irving; not to put the knock on Irving as a player. But there was more of a “me-first” spirit with him operating as the team’s point guard.

The worry on the part of some was that the acquisition of Kemba Walker, who was the top dog in Charlotte, might bring some of the same problems. But in terms of integrating himself into the lineup, he has done a better job.

That job was complicated a bit more by Walker’s knee injury, which bothered him even through the coronavirus break, and may or may not render him at somewhat below 100% for this playoff series, where Stevens could conceivably conserve him, but at a cost.

In the bubble, the Celtics won five out of eight games, finishing with a record of 48-24 straight-up. One thing to keep in mind is that they were the NBA’s second best team against the basketball pointspread, chalking up a record of 41-27-4 ATS.

In the NBA playoff betting odds on this series, posted by our friends at BetAnySports, the Celtics are the favorutes:

Walker averaged 13.8 points during the seeding games, and maybe the Celtics can get by with that, especially if his capability from three-point range (41% in the bubble) helps him fit into a role. Fortunately, Boston does not need him to go off every night in order to win games. They have other people like Jaylen Brown, Jayson Tatum and Gordon Hayward who can handle the scoring load in any given situation.

But there may be trouble looming against the 76ers, because the Celtics have to avoid being “soft” on the inside. Remember that they are going up against Joel Embiid, who is one of the great centers in the league, and who has the ability to take control of a game.

They’ll probably be willing to give up something on the offensive end for the sake of guarding the rim. Who knows whether they will leave themselves in a weak position on the perimeter as a result. Philadelphia, which is now without Ben Simmons, actually becomes a more dangerous outside shooting team.

So while the Celtics can create some matchup problems for Al Horford defensively, they may not have a big man between Daniel Theis, Enes Kanter and Robert Williams who can deal with Embiid. He could eat them up, and if Boston’s defensive scheme allows for Horford to complement him sufficiently, the Celts have a headache on their hands.

Boston should win the series, but because of the presence of Embiid, laying this price would make me very uneasy.

BetAnySports is your headquarters for all that is available during the NBA playoffs, and there are almost infinite possibilities for action. Reduced juice makes everything even better, and Sports Betting Prime enables you to place wagers during the game………. Don’t forget about the live dealers, who can be found in three different casinos. And there is 50% Rakeback in poker at The DragonRoom……………. Open your account with a debit card or credit card, person-to-person transfer or the virtual currency of Bitcoin, which is fast and easy with their automated system, and NEVER incurs a transaction fee!