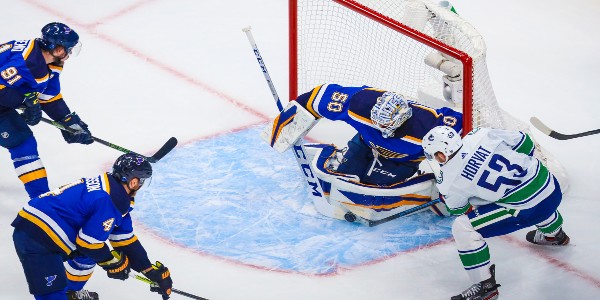 Head coaches are paid to make important decisions, but they don’t make them alone. You better believe that the St. Louis Blues got all of the key voices together to decide on what to do in Sunday night’s Game 3 against the Vancouver Canucks. Will the team show confidence in Jordan Binnington or will they go with Jake Allen in hopes of a spark?

The Blues are still a -130 favorite at DSI Sportsbook to climb back into the series and make it 2-1 heading into Game 4 on Monday, but they have a lot of work to do. Placing all of the blame on Binnington takes away from what the Canucks have done well. Maybe the Blues should have taken the Round Robin games a little more seriously, but the Canucks have played great defensively in this series.

In fact, the Blues only have an edge of one in the scoring chances department. The Blues have three more high-danger chances than the Canucks. For a Vancouver team that was -6 in even strength goal differential during the season, they’ve played really well in this series against a Blues team that was +27 in that department.

Binnington is being labeled the scapegoat in this series because it comes with the territory of being an NHL goaltender, but the Blues simply need to generate more offense. They’ve managed 1.66 expected goals for and 1.47 xGF at 5-v-5 in this series. That will not get it done against anybody. When you factor in how much better Jacob Markstrom has played than Binnington, it puts the lack of offense in the spotlight even more for the Blues because they are not giving themselves any margin for error.

The balance swung on special teams in Game 2. After the Canucks got a bunch of power play time in Game 1, the Blues had a bunch in Game 2. Unfortunately, they allowed a shorthanded goal and gave up two power play goals to the Canucks. It just seems like nothing is working right for Craig Berube’s team and you really do wonder if they should have taken things a lot more seriously in the three-game tune-up for the first round.

You also have to give the Canucks a ton of credit. They’ve scored five power play goals in the series and have virtually canceled St. Louis out at even strength. That is a pretty good recipe for a team attempting to pull an upset. Hang on at 5-v-5 and try to capitalize when you get the chance to go on the attack. The Canucks have outskated and outworked the Blues to loose pucks and have been able to stack up really nicely in a lot of different game situations.

Their star players have also shown up. Bo Horvat scored the game winner in overtime of Game 2 on an outstanding long pass from Quinn Hughes. Brock Boeser has four assists. Elias Petterson has three points. The role guys have done their jobs to limit St. Louis’s chances, but the stars have shown, particularly on the power play.

Vladimir Tarasenko has been absent for the Blues. Colton Parayko hasn’t played well. Brayden Schenn has zero points at 5-v-5. The Blues aren’t getting what they need from their best players and a lot of that can be attributed to the great defensive effort from the Canucks.

As we look at Game 3, we have to ask ourselves what will change. The obvious answer is Jake Allen in net, especially with a back-to-back scenario with Game 3 and Game 4, but Allen doesn’t play forward. He doesn’t start the rush as a defenseman. Yeah, Binnington hasn’t played well, but he is far from the only issue right now for the Blues. There are too many passengers and not enough drivers upfront. Whether or not St. Louis can flip the switch for Game 3 remains to be seen, but they sure as hell didn’t for Game 2.

The Blues squandered “home ice” and the last change in the first two games of the series. I wonder if maybe a more simplistic approach will help them in an effort to generate more offense.

However, the play to me is the under 5.5. The power plays have been the reason why these games have gone over. As both teams are now in the flow of the series, I have to think some of those infractions start to go away. I also think the Blues are going to tighten up a lot of things with their penalty kill. Allen may help, if he gets the call. And he should.

At 5-v-5, scoring chances have been pretty limited and now Vancouver gets to match up as they see fit to potentially limit St. Louis’s even strength offense even more. I’m expecting a low-scoring game in this one.

BET THE GAME 3 UNDER BETWEEN THE BLUES & CANUCKS