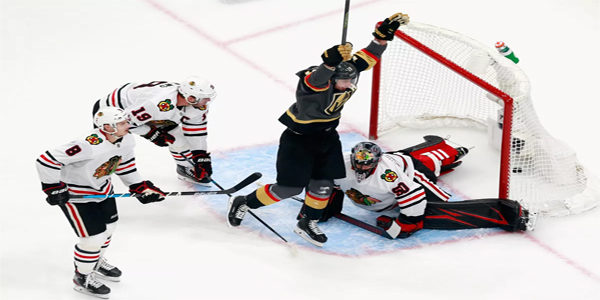 It comes as no surprise, but the series between the Vegas Golden Knights and the Chicago Blackhawks has been a one-sided affair. Game 2 may have gone to overtime, but it probably shouldn’t have. The Golden Knights can take a commanding 3-0 series lead on Saturday night and they are heavy favorites to do so with a price tag of -210 at BetDSI Sportsbook. The underdog Blackhawks check in at +175.

Through two games, Vegas has outshot Chicago 64-37 at 5-on-5. The Golden Knights have scored eight goals and the Blackhawks have scored two in that game situation. Vegas has carried the play in so many ways, ranging from Corsi to faceoff percentage to scoring chances. Vegas has 58 of those at 5-v-5 to 40 for Chicago.

But, things got a little bit dicey in Game 2. Did Chicago make the right adjustments and show signs of life or did Vegas relax a little bit after taking a 2-0 lead to the dressing room after the first period?

Vegas came out guns playing in the first and third periods. In the third period, Vegas had 17 scoring chances to three for the Blackhawks. The only reason the game got to overtime was because Corey Crawford had his best period of the series and gave his team a chance. A wide-open overtime period eventually fell Vegas’s way and they took the 4-3 decision to defend “home ice advantage”.

That will be a big key in Game 3. Chicago has gotten killed in the faceoff circle in this series. The Blackhawks have only won 35.6% of the draws. Giving up puck possession to the Golden Knights is a bad idea and Vegas has been able to dictate the first two games of the series in so many different ways as a result. The Blackhawks need to find a way to make some changes and maybe getting more favorable line matchups with home ice in Game 3 will help.

They’re also going to have to find a way to generate more offense. The Blackhawks cannot beat Vegas unless they turn games into track meets and throw everything humanly possible at Robin Lehner. Crawford has seen 73 shots in two games. Lehner has seen 45. He hasn’t had to be great for Vegas, though he’s played well when called upon to make a big save.

There is also a question here as to whether or not head coach Peter DeBoer throws face of the franchise Marc-Andre Fleury a bone in Game 3. There was some question going into Game 1 as to which netminder would get the nod. It was the correct decision with Lehner, who played much better in all of the notable metrics than Fleury. It would likely behoove Vegas to have two goaltenders in tip-top shape, so it wouldn’t be a total surprise to see MAF get the Game 3 start, especially with the series in hand now with a 2-0 lead.

Chicago doesn’t have a question in net. For better or worse, it’s going to be Crawford. He hasn’t played poorly in this series, as he hasn’t gotten a lot of help or a lot of downtime with Vegas buzzing through the offensive zone most of the game, but he’s going to have to find a second gear for the Blackhawks to make a series of this whole thing.

That seems easier said than done. Given the overtime factor and a back-to-back in this series with games on Saturday and Sunday, Fleury does make some sense for Vegas here. If that ends up being the case, then the over 6 at -120 from DSI Sportsbook is very much in play. Even if it winds up being Lehner, the Blackhawks need to come with a huge push because they are going to have to outgun Vegas if they want to get back in this series.

The over looks like the play for Game 3. If my speculation is correct regarding Fleury, you might want to get it early because it will be 6.5 shortly after he is announced. If not, it is still the preferred bet on the game.

TAKE THE OVER IN VEGAS VS. CHICAGO ON SATURDAY NIGHT!