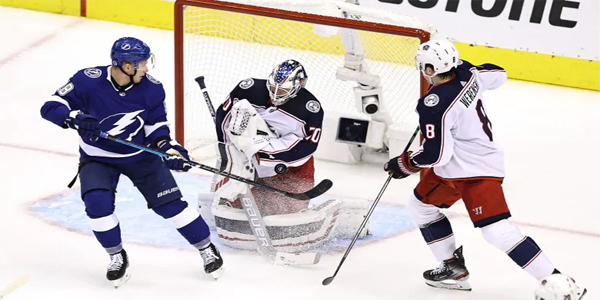 The Columbus Blue Jackets might be the best team in hockey at hanging on for dear life. It almost seems like they relish the situation at times. They did that for several overtime periods in Game 1 against the Tampa Bay Lightning, a game that came less than 48 hours after they upset the Toronto Maple Leafs in the Qualifying Round. They did it again in Game 2, just with a different outcome.

Heading into Game 3, the Blue Jackets and Bolts are tied at 1, but Columbus is very fortunate to be in that position. The Lightning are a -185 favorite at DSI Sportsbook to win Game 3 and take control of the series. The Blue Jackets are a resilient, tenacious bunch and they will not make it easy for Tampa Bay.

Once again, Columbus’s goaltending has been obscenely good, much like it was in the series against Toronto. It has been all Joonas Korpisalo in this series with 121 saves on 125 shots. He set the record for saves in an NHL game in Game 1 when he stopped 85 of 88 Tampa Bay shots. He stopped 36 of 37 in Game 2.

The Blue Jackets were not as badly outplayed in Game 2, but they did very little in terms of generating chances 5-v-5. TBL outchanced CBJ 26-18 at 5-v-5 and had 10 high-danger chances to six for the Blue Jackets. Per Natural Stat Trick, Columbus had an expected goals for of 1.06 at 5-v-5. Tampa Bay controlled the game once again, but Columbus scored a couple of opportunistic goals and came away with the 3-1 win.

The metrics crowd is going to point to the entire body of work in these seven playoff games for Columbus and look down upon John Tortorella’s team. The growing sentiment in the analytics community is that this has been all Joonas Korpisalo and Elvis Merzlikins. To some degree, that may be true. There is also a belief among the Blue Jackets and their fans that this is just how it goes. We saw throughout the regular season that Columbus generated very few high-quality scoring chances. They also surrendered very few.

Therein lies the problem here. They’ve allowed a few too many quality chances in the playoffs, but Korpi and Elvis have been equal to the task. How long can this go on? How long can Columbus win with tenacity, speed, and work ethic. They’ve played seven games with great urgency. Tampa Bay has played two after going through the motions to a degree in the Round Robin part of the restart.

The Blue Jackets win by outworking the opposition and getting good goaltending. This almost feels like a fork in the road for them. They won’t be able to continue outhustling and outworking Tampa Bay as the games and minutes mount. The balance of this series is among the many things on the shoulders of Korpisalo. He’s playing far and away the best hockey of his career right now and it couldn’t come at a better time, but the sustainability of his play is really in the spotlight right now.

That isn’t the only thing. Seth Jones has played a ton of minutes. Zach Werenski is playing hurt. David Savard and Vladislav Gavrikov have spent a ton of time in their own zone.

The stats are the stats and many believe they don’t lie. Many also believe that there are a lot of other intangibles that come into play in sports that cannot be quantified. It seems like those groups will be at odds with the handicap of this game. To me, Columbus looked worn down in Game 2. They looked especially tired in the second period with the long change. They buttoned it up in the third period and played a fairly even 20, but still got outplayed in all three periods.

I would expect the same in Game 3. They’ve played a ton of hockey and it’s only going to take one or two cracks for the levee to break. I think that happens in Game 3.

TAKE TAMPA BAY ON THE PUCK LINE AT BETDSI!