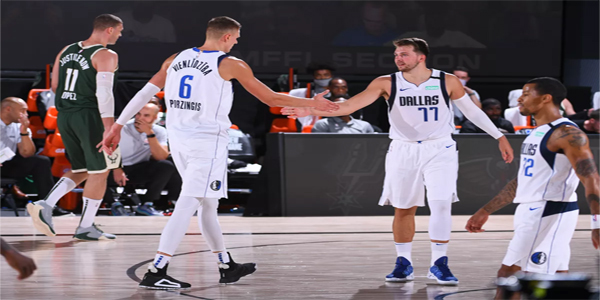 BetAnySports customers who have not seen Luka Doncic, the second-year sensation of the Dallas Mavericks, they are in for a real treat. He might be, in terms of overall offensive skills, the best player in the NBA, with the possible exception of Giannis Antetokounmpo. And they are going to need him to be every bit as good as he’s been all season long if they are going to have a chance of upsetting the second-seeded Los Angeles Clippers in the Western Conference quarter-finals.

One of the things that is so dangerous about the Mavericks and what they do is that they can kill you from the outside. When a guy like Seth Curry gets hot, of course, he can turn the tide in any game. He is, at the risk of coming off sacrilegious, maybe a batter three-point shooter than brother Seth.

But they can also do this kind of thing with their up-front people as well. Dorian Finney-Smith can stretch a defense, as can Kristaps Porzingis, who is really like a small forward in a 7-foot, three-inch body. What’s important to remember here is that he can take the man guarding him to the outside. In this case, that would mean Ivica Zubac of the Clippers. And it wouldn’t be a bad thing to keep him out of the lane.

In the NBA playoff odds on this series, as they are posted at BetAnySports, the Clippers are solidly the favorites:

Naturally the presence of Doncic is a major factor here. He can be everywhere on the floor, with a Larry Bird-like awareness of what is happening. That he is only 21 years old is astounding. Who will corral him? Well, Kawhi Leonard is a great defender, as we all know, so it would seem natural that the responsibility would fall to him. Patrick Beverley can’t match his size. Doncic’s ability to get inside a defense and hit an open man could lead to plenty of three-point opportunities.

That’s obviously a wild card. Otherwise, the Clippers might be able to significantly slow down what Dallas can do.

Where Los Angeles might come out with a huge edge is with production from the second unit, and you can bet Doc Rivers will be looking to match one set of reserves with the other. There is no team in the NBA that can bring the Clippers’ level of firepower off the bench.

Okay, we will have to allow for the possibility that the Clippers may not be 100% in that area right away, because Montrezl Harrell, who has spent a lot of time off the court, can’t go flat-out yet, and Landry Shamet is coming off an injury problem. Lou Williams’ behavior lost him some time as well. So it would stand to reason that for the Mavericks to get to this opponent, they’ll have to start doing it early on. If you let all these bench people get into a groove, you’ll have a foe who is much better on defense to begin with and able to stretch leads when it’s reserves vs. reserves.

Oh, and also they have to stop getting the “yips” in close games. When you consider that Dallas’ offense drops almost 17 points per 100 possessions when it’s in a “5-and-5” situation (that is to say, five minutes or less remaining and a margin of five points or less) doesn’t work in their favor. Does that change overnight? Not sure about that one.

So it’s likely we’ll get lots of oohs-and-aahs out of Doncic, and perhaps an early Mavs upset, but I can see this one ending in six games. Or fewer.