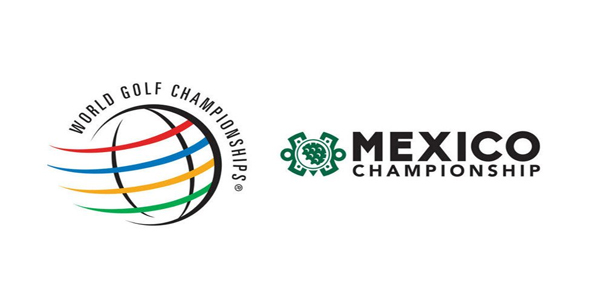 This week the world’s best players head down to Mexico City to compete in the World Golf Classic – Mexico. World Golf Classic events are unique in that the field is based upon the Official World Golf Rankings which rewards points for performance on all tours, weighted according to field strength. This means that, similar to Majors, the field is made up of players from the USA, Europe, Asia and beyond. The top 50 in the OWGR gain automatic entry and the field is completed by adding the highest ranked players from a two-year span on the Euro and PGA tour, the top 2 on the Japan, Australasian, Sunshine and Asian Tour Order of Merits in 2018 and is finished off by adding the top ranked Mexican player in the OWGR. This leaves us with an elite field of 70 and a no cut event giving each player 4 rounds to compete. Before breaking down the course, let’s quickly recap last week.

Adam Scott held on down the stretch to secure an outright victory for readers, the first of 2020. Riviera proved to be one of the best tests in golf and the tournament as a whole was outstanding from start to finish. The cream really rose to the top in the first edition of the Genesis with invitational status with guys like Rory, Kuchar, DJ and Matsuyama all making a run and falling short. The fast and firm conditions made Sunday some of the most compelling golf we will see all year and it really provides a blueprint for courses that are looking to challenge golfers with obstacles other than length. Full tournament head to heads featured here went 2-1 and 4-2 overall capping off an extremely profitable week. Onto Mexico!

The WGC – Mexico is played at Club Du Golf Chapultepec in the heart of Mexico City. Players will not only have to deal with Montezuma’s Revenge but also by far the highest altitude of any course these guys will play all season. The course is a par 71 that plays at over 7300 yards but with the course sitting at 7500 feet above sea level the players have said it actually plays closer to 6600 yards with players seeing 10-20% more distance on shots depending on which club is used.

Off the tee players are faced with a tight, tree lined fairways. Many European players have commented that the course feels like a Spanish or Italian style track which could account for the fact that Euros have seen a good amount of success here in years past. The course plays relatively straight forward, without many doglegs and due to the altitude players will be taking less than driver off the tee and finding fairways is a premium due to the dense tree lines that will block any wayward tee shots. We are back with the rather rare Kikuya fairways and rough, although players should be used to it by now playing it 3 of the last 5 weeks. Remember, around the greens it can be nasty.

Speaking of the greens, Chapultepec features Poa, the last time we will see the devilish surface for quite some time. That means more variance with the shorter putts due to the natural bumpiness of the greens, but I will say it is not as drastic as what is found with the West Coast Poa. This will also be the case when we head to the Northeast and encounter Poa again later in the season. The greens are rather small by Tour standards and players have commented that the slight undulations can be difficult to read. While I don’t expect to see the putting difficulty we did last week at Riv, players will need to be solid from 5 feet and in to have a chance in Mexico.

The Par 5s here are very scoreable, which gives bombers a slight advantage as they will have even less into these important holes. With conditions looking the same as the last two years in Mexico, it is fair to expect the same favorable scoring positions with the winner coming in anywhere from 16 to 20 under. This means we will need to look for guys who put themselves in position to make a lot of birdies. It is worth noting that 13 of the last 16 WGC winners worldwide have come in at 25-1 or less and considering the hefty purse that comes with winning a WGC, that makes sense. With that said, let’s get to The Plays!

Xander Schauffele +2200 – With 13 of 15 WGC winners coming from 25-1 or less, it would be hard to leave the no cut event king off the card. If you look past his yearly missed cut at Torrey (hometown, distractions, who knows but he has sucked there) it is hard to find someone more due that Xander to notch his 5th win on Tour. A 2nd place finish at the Tour Championship to end last year was followed by a playoff loss to Rory at the WGC – HSBC in China and another playoff loss at the Tournament of Champions to Thomas. There is likely nothing here but that is 2 more close calls at no cut events to go along with his 3 no cut event wins. Interesting! His form is solid, gaining 5.6 strokes ball striking last week at the Genesis including a 2 under 69 when the course played its most difficult on Sunday. He struck it well enough to be right there last week, he just couldn’t get any putts to fall, losing over a stroke on the greens over the 4 days. He gained 10 strokes ball striking here last year, suggesting altitude will be no issue. Most readers know that I am a sucker for a ball striking machine that just needs a few putts to fall to content and Xander absolutely fits that bill this week and comes in as my favorite under 25-1 play.

Bryson DeChambeau +3000 – A 5th last week at the Genesis was all I needed to see to secure Masters ticket at 45-1 and I will gladly back him here at slightly lower odds in a far inferior field. I love hearing stories of guys dedicating themselves to changes in their game during the off season, while I’m sure many do, few talk about it. Bryson was open about his desire to gain more distance off the tee and devoted himself to getting stronger to achieve that goal. The results are there as he was first in SG:OTT at WMPO and 3rd at Riv. My issue came from the fact he lost almost 5 Strokes on Approach at the relatively easy WMPO, but his striking performance at the Genesis suggests that is fixed as he returned to his old superb approach form, gaining 3.5 strokes in the category last week. While last year was undoubtedly disappointing, a 2nd at the weak fielded 3M being his best finish, he is less than 2 years removed from wins at Jack’s Tournament and the first and second legs of the 2018 FedEx Cup. A return to that form seems imminent and I will always error on the side of pedigree (he also has US Amateur and NCAA Individual titles) when attempting to determine if a player will bounce back to past form. In a tournament where his new found distance could separate him from the field, I look for DeChambeau to be in the hunt come Sunday.

Carlos Ortiz Top 20 +285 – The University of Texas product will undoubtedly be a fan favorite in his home country of Mexico and he is coming into his first ever WGC event playing some incredible golf. In the field being the highest ranked Mexican player without an automatic invite (he should be thanking Ancer for being so good), Ortiz has jumped between the Korn Ferry Tour and the PGA Tour since he turned pro in 2013 but is now in his second full season playing with the big boys and has put together some impressive performances early on. He has made 10 of his last 11 cuts including back to back top 5 performances to close out 2019. What I like about Ortiz is that his game is solid all around. He has averaged positive strokes gained in each of the big 4 categories over his last 5, 10 and 20 tournaments. It is rare you see that kind of consistency with anyone outside of the elite players. Although he is not from Mexico City, my guess is he has plenty of familiarity with the course and the altitude adjustment should be a piece of cake for the Mexican National. Remember, the field is small this week and where you usually have to best 140+ guys to reach the top 20, this week that number is cut in half. At almost 3/1 I will gladly back a player with his form and familiarity.

2u Kurt Kitayama -1.5 (+120) o Chez Reavie – Reavie is in the midst of one of the worst ball striking stretches of his entire career. Do not be fooled by his 10th last week at the Genesis, he did so behind an unsustainable 6 strokes gained around the greens (meaning he must have chipped in a few times) and 3 strokes gained putting. Striking wise he lost over a stroke ball striking, something he has done 3 out of 5 events in 2020, missing the cut in all 3. Kitayama is little known to regular PGA Tour followers, but Euro enthusiasts are well aware of Kurt’s game. The UNLV product qualified for the 2019 Euro Tour and became the fastest player in history to record two Euro Tour wins, collecting his 2nd in just his 11th start. A T6 late last month in Dubai shows he has picked up right where he left off in 2019 where he fell just shy of winning Euro Tour Rookie of the Year. Kitayama can absolutely move it, ranking 6th in driving distance on on the Euro Tour last year and should benefit greatly from the high altitude. Kitayama is likely a name you should get accustomed to, as his goal is to play full time Stateside but for now we can get him at a discount vs an out of form Reavie.

That is it for this week! As always, thank you for reading and make sure you follow my Twitter @jmazzjd. I’ll be releasing my full card there on Wednesday morning as well as any Outright adds tournament progresses. 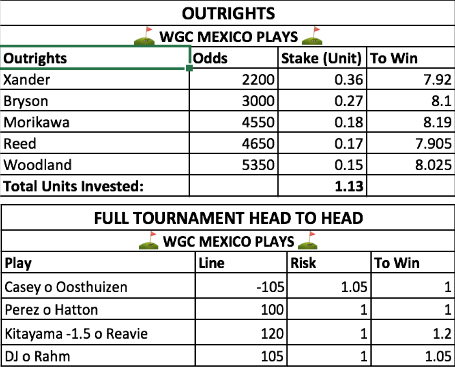 The Importance of Closing Line Value