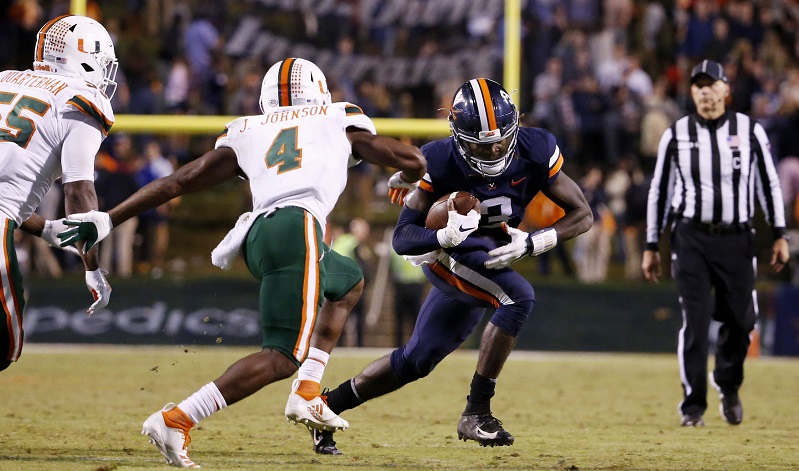 Week 5 of the 2021 CFB season kicks off Thursday, September 30, with the ACC showdown from Hard Rock Stadium in Miami, so we’ve prepared the best Virginia Cavaliers vs. Miami Hurricanes betting pick and odds.

The Hurricanes have dominated the Cavaliers lately, winning five of their previous six encounters. Still, the Hurricanes have covered just twice in that span. Miami opened as a 4-point home fave for Thursday’s clash, while Virginia is a +160 moneyline dog with a total of 62.5 points on BetOnline Sportsbook.

The Cavaliers look to stop a two-game slide

The Virginia Cavaliers (2-2; 2-2 ATS) started the new season with a couple of convincing home victories to William & Marry 43-0 and Illinois 42-14. However, things changed in Week 3, as the Cavaliers suffered a heavy 59-39 defeat at the No. 21 North Carolina Tar Heels.

Last Friday, Virginia suffered another heavy loss. The Cavaliers welcomed Wake Forest as 3.5-point favorites and lost 37-17. Brennan Armstrong tossed for 407 yards, two touchdowns, and an interception, while Dontayvion Wicks had eight receptions for 114 yards and a TD, but the Cavaliers ran for only 99 yards while averaging 3.7 yards per rush.

On the other side of the ball, Virginia allowed Wake Forest to dominate on the ground and record 203 rushing yards on 45 carries. Through the first four weeks, the Cavaliers are yielding 201.3 rushing yards per contest (113th in the country) while racking up only 114.8 in a return (110th).

The Hurricanes cruised through Week 4

The Miami Hurricanes (2-2; 1-3 ATS) had an easy job last Saturday, so they covered the spread for the first time this term. Playing as massive 46-point home favorites, the Hurricanes dismantled the Central Connecticut Blue Devils 69-0 even though they were missing their starting QB D’Eriq King.

King is struggling with a shoulder injury and will probably miss Thursday’s game against Virginia. Freshman Tyler Van Dyke started under center in Week 4 and tossed for 270 yards and three touchdowns while completing 10 of his 11 pass attempts. Brashard Smith had five catches for 91 yards and a TD, while Camron Harris added ten carries for 100 yards and a couple of scores.

The Cavaliers are winless in eight straight showings on the road, going 2-6 ATS in the process, so I’m backing the Hurricanes to come out on top and cover a 2.5-point spread. This should be a tight contest between a couple of divisional rivals who have been playing in a shaky form recently, and the Hurricanes will have strong support from the stands which could be an X-factor.

D’Eriq King’s absence seems like a huge blow for the hosts, but Tyler Van Dyke looks ready for the challenge, especially against the Cavaliers’ leaky defense. The Hurricanes should make a few stops more than their rivals here.

Six of the last seven encounters between the Cavaliers and Hurricanes went in the under. Also, the under is 4-1 in Virginia’s previous five games overall, and it is 3-1 in Miami’s last four outings at any location.

I’m following the betting trends, although the Cavaliers have been awful on the defensive side of the ball so far this season. Miami’s offense hasn’t impressed, as 69 points against Central Connecticut are not a big deal. I’m expecting the Hurricanes to run the ball as much as possible against this Cavaliers defense that has a lot to prove.