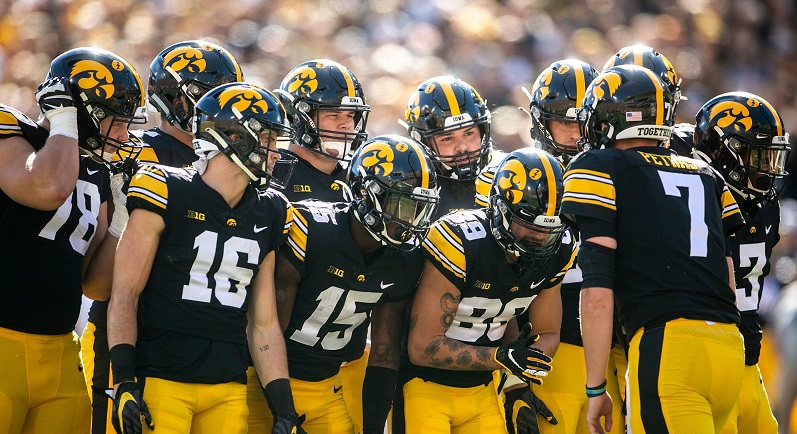 The college football betting action continues on the first day of October with three Week 5 matchups around the country, including the Big Ten Conference showdown at Maryland Stadium, so we bring you the best Iowa Hawkeyes vs. Maryland Terrapins betting pick, tips, and odds.

According to MyBookie Sportsbook, the No. 5 Iowa Hawkeyes are 3.5-point road favorites with a total of 48.0 points. They meet the Terrapins for the first time since 2018 when the Hawkeyes blanked Maryland as 9.5-point home favorites, 23-0.

The Iowa Hawkeyes (4-0; 3-1 ATS) are riding a ten-game winning streak following a 24-14 home victory to Colorado State this past Saturday. They overcame a seven-point deficit from halftime, shutting down the Rams in the second half while scoring 17 unanswered points. Spencer Petras went 15-of-23 for 224 yards, two touchdowns, and an interception, while the Hawkeyes ran 32 times for a paltry 54 yards.

Iowa leans on its stout D, surrendering 84.5 rushing yards per game (17th) while racking up 13 sacks (tied-18th). The Hawkeyes have yielded more than seven points just twice over their previous five outings.

Maryland hopes for another home upset

The Maryland Terrapins (4-0; 3-1 ATS) opened the 2021 CFB season with a 30-24 home victory over West Virginia, upsetting the Mountaineers as 3.5-point underdogs. Week 2 saw the Terrapins dismantling Howard 62-0 as 48.5-point home favorites, while over the previous two weeks, Maryland has outlasted Illinois 20-17 on the road and Kent State 37-16 at home.

Taulia Tagovailoa leads the charge for the Terrapins, tossing for 1,340 yards, ten touchdowns, and an interception. Last Saturday, he threw for 384 yards, three scores, and a pick in that comfortable win over the Golden Flashes while completing 31 of his 41 pass attempts.

While the Hawkeyes have already recorded a couple of wins over the top-25 teams, the Terrapins will have their toughest test of the season so far. Hereof, I lean the visitors to escape with a narrow win, but betting on the totals seems like a way to go in this matchup.

Taulia Tagovailoa has impressed through the first four weeks, but he’ll have to prove his worth in this tough matchup with one of the best defensive units in the nation. Saturday’s clash should be decided down the stretch, and I trust the Hawkeyes’ D more, as the Terrapins have some problems in their secondary.

The totals have gone under in the Hawkeyes’ last five outings at any location. Also, the under is 6-1 in Maryland’s last seven showings as an underdog, and it is 9-2 in the Terrapins’ previous 11 games overall.

Considering how good these two teams have been defensively so far this season, I’m following the betting trends, taking the under as my best Iowa vs. Maryland betting pick.