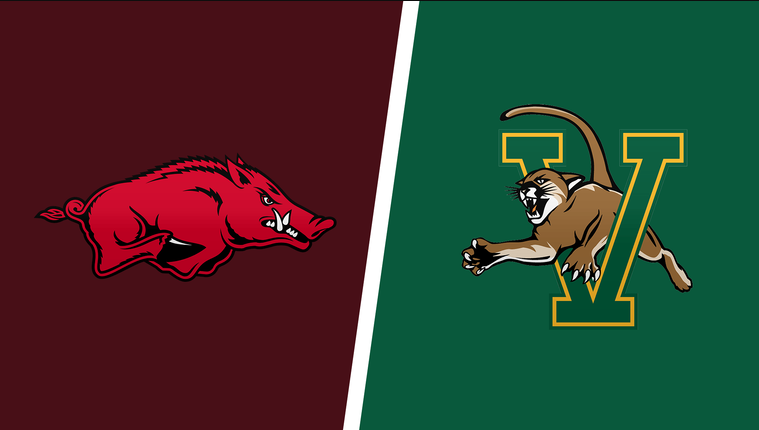 The KeyBank Center in Buffalo, New York, will host the Men’s Basketball Championship – West Region – 1st Round game, so take a look at the best Vermont Catamounts vs. Arkansas Razorbacks betting pick and odds. The game will tip-off at 9:20 PM ET on Thursday, March 17.

According to Bet Us Sportsbook, the Razorbacks are 5-point favorites, while the total is set at 139.5 points. The winner of this game will face UConn or New Mexico State in the second round of the NCAA Tournament.

For the sixth time in a row, the Vermont Catamounts won the regular-season title in the America East conference, but after failing to do so in the last two years, they won the tournament as well. Vermont ended the regular season with a 28-5 record (17-1 in conference play) dominated the tournament as they beat NJIT, Binghamton, and UMBC to clinch the title. The Catamounts will participate in the NCAA Tournament for the 8th time.

Senior forward Ryan Davis leads the team this season with 17.2 ppg and 5.7 rpg, while Ben Shungu (16.2 ppg and 4.5 rpg) is the second-best player for the Catamounts. Vermont is No. 52 in the NCAA NET Rankings and No. 58 in the KenPom rankings.

Arkansas was stopped in the semis of the SEC

The Arkansas Razorbacks finished the regular season with a 25-8 record (13-5 in conference play), but couldn’t reach the final of the SEC tournament as Texas A&M stopped them in the semis with an 82-64 win. The 1994 NCAA Tournament winners will appear at the Big Dance for the 34th time.

Vermont is having an impressive season, but let’s be honest, the Catamounts are coming from a weak conference that is no match to the SEC. The America East has just one team to represent it at the NCAA Tournament – Vermont, while the SEC has six teams including Arkansas.

The Catamounts exceeded the expectations by reaching the Big Dance and winning the conference title, and every win from now on would be considered as an upset. The Razorbacks have enough experience to let that happen, so I am backing the favorites here.

The Catamounts indeed have the 10th best defense in the country, but as I said, they are playing in a weak conference with weak teams. This will be a game-changer for Vermont, who faces the Razorbacks, a top 50 offense. Defenses will not play an important part in this one. Arkansas is 33rd in pace, so expect the Catamounts’ defense to be under a lot of pressure.