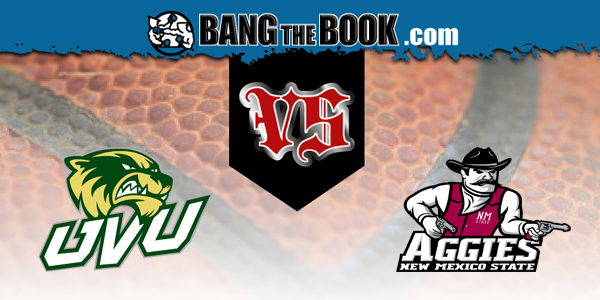 There was a lot of line movement in yesterday’s Vermont vs. UMBC game. The Catamounts closed -4.5 and the total closed 135. Our under 133 was in bad shape from the jump and an 88-point second half saw the game fly over the total. We’re still on the plus side for this week, but that was an ugly one and a bad call.

Friday’s card is quite extensive as we get a bunch of the Friday/Saturday back-to-backs in a lot of conferences. Our focus will be on a game well off the beaten path in the wiggity, wiggity WAC between Utah Valley and New Mexico State. The Aggies are favored by nine points with a total of 143 as we return to Bookmaker Sportsbook in hopes of changing things up a little bit.

This one will be played at the Eastwood High School Gymnasium in El Paso.

A lot of Utah Valley’s wounds this season have been self-inflicted. The Wolverines don’t take care of the basketball and turn it over too much. They’ve missed their free throws. They’ve lost games that they shouldn’t. They’ve fouled too often. They’ve failed to defend the three-point line.

However, Mark Madsen’s squad has done a lot of good things, too. UVU is a high-quality rebounding team, especially on the defensive end, where their 22.3% ORB% against is 16th in the nation. The fact that they can’t make free throws is extremely disappointing because they get to the rim a ton and get fouled a lot. Their 44.6% FT Rate is second in the nation. Their two-point percentage is 40th in the country at 54.3%.

For some gory math, we head to Haslametrics. Utah Valley ranks third in Erik Haslam’s “Proximity” metric, which is a measure of shooting proximity vs. the average opponent. Only Stephen F. Austin and St. Bonaventure grade higher than Utah Valley’s 1.859 mark. The closer to 1, the closer to the rim the shots come. The closer to 3, the more threes a team takes.

Utah Valley also ranks 11th in NPA%, which is Near Proximity Attempt Percentage. Basically, Utah Valley gets to the rim and gets a lot of great looks at the basket. They’ve converted a lot of those two-point shots, but they have left a lot of points out there at the free throw line as well. The Wolverines are a decent three-point shooting team at 35%, but their 27% 3P Rate ranks 340th in the nation.

New Mexico State has had a hard time getting going this season. Extremely strict COVID protocols have pushed the team to El Paso, TX for its home games. The Aggies were idle from December 28 to January 25, so they’ve only played 10 games this season and have split them down the middle with a 5-5 record. They have actually lost four of six conference games in a league that they usually dominate.

You would think that with each passing game, NMSU would start to look better, but they’ve been as inconsistent as the day is long. Losses to Grand Canyon are understandable, but the Aggies gave up 1.28 points per possession to Cal Baptist in the first game before adjusting to win the second game by 27. They lost the first game on the road at Seattle by 11 before turning around to win by seven in the second game.

You really don’t know what you are going to get from New Mexico State on a game-by-game basis. It has definitely been a throwaway year, but the Aggies could still put it all together and make a run to go to the NCAA Tournament. That would probably start tonight with a good performance against Utah Valley.

New Mexico State is also a good rebounding team, which could neutralize some of what Utah Valley does well, but the Aggies are allowing opponents to make 51.9% of their twos and 35.3% of their threes. The Aggies are 11th in 3P Rate, so they’ve taken a ton of treys, but are only making 30.3% of those shots. This will only be the team’s third game at Eastwood High School. Surely they’ve been practicing there, but it still has to be quite strange.

Going against a New Mexico State team that is the most talented in the WAC is a bit scary, but they don’t really seem to have everything together to the point where we can reliably expect them to beat an opponent by double digits. Utah Valley gets way too many high-percentage looks at the rim in my opinion for NMSU to get a blowout victory.

My only concern here is that Utah Valley’s free throw shortcomings come into play late in the game, but this could also be a game played to New Mexico State’s slow tempo. Tarleton State slowed Utah Valley down. They seem to play at the tempo of their opponent. A low-possession game makes it even harder to blow a team out.