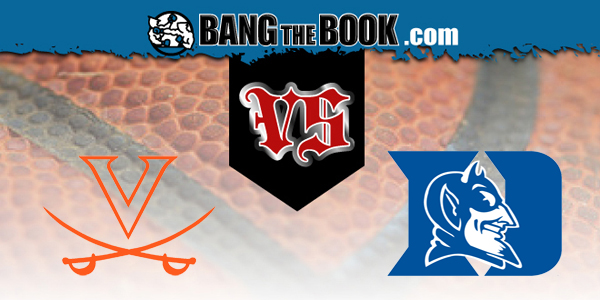 Friday night’s pick on Utah Valley was a winner, so we’ll head into the weekend with a 3-2 mark on the spotlight game previews. In search of a late game, the options are fairly limited, as the Saturday afternoon slate is a big one. There are a lot of back-to-backs featuring teams that played last night, so you want to check the box scores for any outliers and see if there is something actionable for tonight.

Many in the late window will be looking at Virginia vs. Duke and sometimes you just need to preview the biggest of the games. While the money spends the same betting in the Southland, Big Sky, or WAC, the marquee games do draw the most eyes and the most attention and that will be true of this one.

Virginia is -2 at Bookmaker Sportsbook with a total of 132 for this ACC clash at 8 p.m. ET on ESPN.

Tony Bennett’s team has had several days to stew about what transpired on Monday. Virginia was railroaded by Florida State in a 21-point loss in Tallahassee. Nothing went right for the Cavaliers, who allowed a season high 81 points and tied a season high with 13 made three-pointers against. Florida State had 1.308 points per possession, a mark eclipsed only by Gonzaga back on December 26.

It was also an off day on the offensive side of the ledger for Virginia. The Cavaliers were just 22-of-47 from the field and turned the ball over 21% of the time, which was just shy of the season high achieved in that 23-point loss to Gonzaga. We would certainly expect a team coached by somebody like Bennett to bounce back in this situation.

UVA isn’t quite as stout defensively as we’ve seen in the past. The pack line defense still ranks 25th in adjusted defensive efficiency, but just 76th in eFG% defense. If it holds, it will be the first time since 2016 that UVA wasn’t in the top 25 in eFG% and just the second time not in the top 10 in that span. The Cavaliers are still second in eFG% defense in ACC play.

They’re also second in eFG% offense, so hopefully bettors don’t overreact to the one game against a very athletic and talented Florida State team. The Cavaliers are second in both 2P% and 3P% in league play. They also make their free throws at a 77.3% clip. The two areas lacking for the Cavs are forcing turnovers on defense and getting offensive rebounds.

The two areas Duke does pretty well in ACC play are getting offensive rebounds and forcing turnovers. Opponents have made a ton of shots against the Blue Devils in league play, including a 38.8% success rate from three, but Duke is fourth in TO% defense and third in ORB%. Those will be the two keys to victory for a Blue Devils team that has fallen on the wrong side of luck this season.

Duke is 1-6 in games decided by six or fewer points. In the F.U.N metric, which in this case at Bart Torvik stands for Failure Unexplained by Numbers, Duke ranks 327th. It is a metric similar to KenPom’s Luck Factor. All but one of the close losses have come in ACC play. The other was against a Michigan State team that we’ve since found out is not very good.

The Blue Devils played free and easy last week in the win over North Carolina State and then did the same on Wednesday with a blowout W against Wake Forest. Things may have been simplified a bit for Coach K and his staff when Jalen Johnson opted out of the rest of the season. The likely lottery pick was up and down with his play and it sure seemed like he had one foot out the door in this weird COVID season.

This is just an odd mix in general for Duke. Sophomore Matthew Hurt is the team’s best player and freshmen DJ Steward and Jeremy Roach see the floor a lot, but the Blue Devils just haven’t played well enough defensively and haven’t seemed to gel a ton as a team. Like Virginia, Duke is having an off year without the ball. The Blue Devils rank 261st in eFG% defense. This season will mark the first time since at least 2008 that Duke has finished outside the top 150 in that metric and the first time outside the top 40 since 2016.

With that in mind, I’m looking for offense tonight. Virginia’s pace is still really slow, but I would anticipate that the Cavaliers can have success shooting over this Duke defense. Just about everybody else has. Duke just played a couple of slow-paced games, albeit against worse teams, and had 1.128 and 1.369 points per possession. With Virginia’s defense in the tank a bit this year, Duke could take advantage.

Duke is likely to take care of the basketball and maybe pick off some extra possessions on the glass. Virginia is likely to make a lot of jump shots. Virginia overs are an extremely scary proposition to say the least, but the conference is weak offensively and they’ve still had issues.