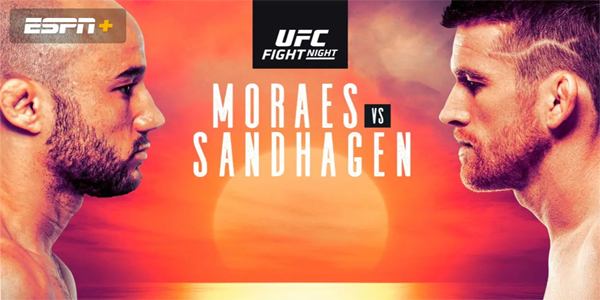 Give Dana White credit. Since he got the green light, UFC has been chugging right along. The promotion has another event this weekend at the Flash Forum in Abu Dhabi with no fans in attendance. It will take place on Sunday in the United Arab Emirates, but it will be Saturday for everybody in the United States with a 1 a.m. Gulf Standard Time start.

The main event for UFC on ESPN+ 37 will feature Marlon Moraes and Cory Sandhagen. This is a huge card, as UFC has put together a lot of fights and fighters that were previously scheduled and were called off for one reason or another. In all, there are 13 fights on the docket, with six on the “main card”. The entire event can be seen on ESPN+.

We’ll break it all down and pay a little extra attention to the main card with odds from BetOnline Sportsbook.

Action begins in the flyweight division with Bruno Silva in search of his first UFC win against promotional newcomer Tagir Ulanbekov. Silva is 0-2 with losses to Khalid Taha and David Dvorak. The 30-year-old was 10-2-2 before coming to the UFC, but his lack of striking power and subpar ground game has hurt him at the top level. Ulanbekov is -400 in his UFC debut with a 10-1 record and a top ground game. His only loss came against Zhalgas Zhumagulov in FNG for the flyweight title more than two years ago. It was a majority decision defeat. Zhumagulov has since joined the UFC.

We’ll have to keep Ulanbekov in mind as a parlay piece as we look down the rest of the card. Tracy Cortez will make her first UFC appearance in nearly 11 months against Stephanie Egger. This is the UFC debut for Egger, who is really stepping up in class and is fighting on a 37-day turnaround. Cortez is a -194 favorite with a total juiced at 2.5 over -240, so we’re likely to see all 15 minutes here. Cortez is 2-0 in UFC with an impressive win over Mariya Agapova on the Dana White Contender Series and a win over Vanessa Melo last November. Egger does have a win over Mara Romero Borella to her name and is 5-1 in her career, with the lone loss in her lone Invicta appearance. This should be a good fight, but a tough one to bet with a lot of cage rust for Cortez in the favorite role.

Omar Morales puts his unblemished record on the line at 145 pounds against Giga Chikadze in what projects to be a pretty good fight. Morales is the -148 favorite, but this line has had some movement to it. The total is again juiced on over 2.5 to -220. We aren’t expected to see many finishes on this card it would seem. Chikadze is 10-2 in his career and 3-0 in the UFC. Morales is also 3-0 in UFC if you include his DWTNCS appearance. Morales appears to be the better grappler and wrestler and Chikadze is the better striker. Both guys have beaten decent UFC competition. This fight is probably closer to a toss-up, but Morales is more likely to win a decision if the fight gets there.

Ali AlQaisi is +190 for his fight against Tony Kelley. Kelley is -225 with another fight where the over 2.5 is juiced more than $2. AlQaisi lost his UFC debut fight to Irwin Rivera back on August 8. Kelley also lost his UFC debut on August 15. Kelley has a size and reach advantage here and was extremely active in the loss to Kai Kamaka III. AlQaisi was the more active fighter in his loss to Rivera, but his output was nowhere near Kelley’s. Kelley looks like a good parlay piece to put with Ulanbekov in the first fight.

A couple of strong, young, athletic fighters match up at 185 pounds between Joaquin Buckley and Impa Kasanganay. Kasanganay is the -240 favorite in this fight after an impressive performance against Maki Pitolo on August 29. It was his second fight in 18 days and he dominated the bout. Kasanganay doesn’t rack up a lot of finishes, but the 26-year-old’s endurance has been a big asset in winning decisions. Buckley, also 26, was knocked out by Kevin Holland on August 8 and nine of his 13 fights have ended in a KO one way or another. Can Kasanganay stay away from Buckley’s power long enough to earn another decision win? That seems like the most likely outcome here. Kasanganay is an excellent grappler and could be a real prospect in the middleweight division.

Chris Daukaus is a big underdog at +225 against Rodrigo Nascimento. Nascimento is -265 in his third UFC fight. He’s beaten both Michal Martinek and Dontale Mayes by submission. You don’t see a ton of heavyweight submissions, but the 27-year-old has eight wins, six by submission. The other two are by knockout. Daukaus knocked out Parker Porter at UFC 252, but he’s outclassed in this fight based on Nascimento’s skill set. This is another parlay piece to put with Kelley and Ulanbekov.

Originally scheduled for last week, Tom Breese and KB Bhullar will fight this week. Breese is -260 to give Bhullar his first career loss. Bhullar is 8-0, but this is a huge step up in class from Unified MMA, where he won the middleweight title back in September 2019. Breese isn’t a great fighter by UFC standards, but he’s been around fighting better competition for the last several years. I don’t like laying big numbers with marginal UFC guys, even if their opponents are stepping up in class. That’s the case here. This is a fight I’d stay away from.

BEST ODDS AND 100% WELCOME BONUS TO BET UFC AT BETONLINE!

UFC debutant Ilia Topuria brings a perfect 8-0 record at just 23 years of age to the table against Youssef Zalal. Quality of competition is a big concern with Topuria here. The youngster from Georgia has fought first-time fighters in each of his last two fights, which were both first-round victories. He did beat a more experienced fighter in Brian Bouland in his CW debut, but this is a big step up in class against Zalal, who has three UFC fights to his name and some LFA appearances.

Zalal has gone the full 15 in each of his UFC fights, which have all been wins. Topuria’s finishing ability is the real question for Zalal here because he has not been a finisher as he has stepped up through the ranks. This will be his fourth fight in just over eight months, so you wonder about that, but he’s 24 years old and in prime physical condition. Topuria, meanwhile, has not fought since November 15 and you wonder how long it takes him to get up to speed here. To me, you try to arbitrage this fight a little bit with Zalal by decision and Topuria inside the distance. Find the best prices for those. Ultimately, I’ll take Zalal with more of a body of work and a lot less cage rust.

Credit to Alan Baudot, who is taking this fight in place of Sergey Spivak on short notice, but he is a big underdog for a reason in this one. Baudot is giving up a bit of size here and, even though he is 8-1, he hasn’t fought since April 11, 2019 and hasn’t fought at any high levels of UFC. His lone loss came against a 5-foot-8 light heavyweight in Dalcha Lungiambula, who is 1-1 in the UFC. That was a knockout loss in 26 seconds.

Aspinall is not exactly proven either, but the 27-year-old is a massive favorite here for a reason. I don’t like betting on anything in this fight. The under 1.5 makes some sense, but at -160, that’s a tough sell as well. Baudot is stepping up a weight class for this fight in order to get paid. That’s about all he’ll get here.

Is this the opportunity that Dricus Du Plessis has been waiting for? The 26-year-old is 14-2 in his career, but the former KSW champ has never gotten a UFC shot. He’ll get one here against a pretty established UFC fighter in Markus Perez. This may be just the right fight for Du Plessis. Perez has lost three of his last five fights and has not fought in nearly 11 months. Du Plessis has also gone about 10 months without a scrap, but the 32-year-old Perez is in a bit of a funk.

On the other hand, we haven’t seen Du Plessis against anybody with anything resembling a UFC resume. This is a step up in class to be sure. While the recent results have been disappointing, he’s still got more to his name than Du Plessis. I’d be willing to look Perez up one more time here to see if he can right the ship against somebody that hasn’t gotten a bigger chance, despite an impressive record.

The career resurgence for Ben Rothwell has been one of the more interesting developments in the heavyweight division over the last 12 months. After a long layoff, Rothwell lost to Blagoy Ivanov and Andrei Arlovski to open 2019. He finished 2019 with a knockout of Stefan Struve and then beat former light heavyweight Ovince Saint Preux in May. Now Rothwell draws Marcin Tybura in more of a traditional heavyweight match.

Tybura is 2-0 in 2020, with both wins by unanimous decision. Rothwell also went 15 minutes last time out, hence the heavy over juice, which is rare for a heavyweight fight. Since the start of 2019, three of Rothwell’s four fights have gone the full 15. Three of Tybura’s last five have and he lost the other two by KO.

Neither one of these guys seems consistent enough to be worth a bet. Rothwell’s recent wins have been more impressive, so the -160 price tag is justified, it’s just too high to bet.

Edson Barboza’s UFC career appears to be coming to a rather painful end. The former top contender in the lightweight division has lost four of his last five fights. In fairness, he’s lost to Kevin Lee, Justin Gaethje, Paul Felder, and Dan Ige, with the two most recent fights by split decision. The loss to Ige was his debut at featherweight. Makwan Amirkhani is not talked about in the same breath as any of the guys that Barboza has lost to recently. Hence the -265 price here.

This feels like a fight to extend Barboza’s relevance as much as possible. The 34-year-old has a chance at a bounce back win here against an opponent that came to the UFC with some promise and some fanfare, but he has fallen short. The big worry for Barboza here is that Amirkhani has 11 submission wins to his name and three of them have been in the UFC.

With Barboza at featherweight for the second time, he should improve. Again, though, this price is just too high to take.

Cory Sandhagen brings a big size advantage into this fight against Marlon Moraes. Sandhagen stands five inches taller and three inches longer than his opponent. Moraes, the longtime WSOF champ, lost his title shot at UFC 238 to Henry Cejudo, who then retired. Moraes bounced back with a win over Jose Aldo, but he hasn’t fought since December. Moraes has a very impressive list of performances throughout his career, including a win over Aljamain Sterling, who just beat Sandhagen back in June at UFC 250.

Sandhagen tapped out to Sterling just 88 seconds into the fight. He only landed one strike in the fight. It was Sandhagen’s first fight in a while, but it’s not like he got anything to carry over into this fight. The more experienced Moraes has fought better competition over the course of his career and that veteran knowhow could be a huge help. Sandhagen wants to aggressively strike, while Moraes is a little more calculated and seems to have the better ground game.

I’ll side with the dog here in the main event.