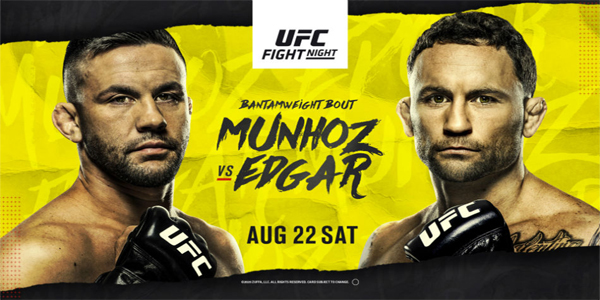 We don’t have any title fights on the UFC on ESPN 15 card, but we do have 10 fights coming up on ESPN+ and ESPN on Saturday August 22. The main event will feature Pedro Munhoz and Frankie Edgar in a battle of UFC veterans. Speaking of UFC veterans, Ovince Saint Preux also makes an appearance to fight Alonzo Menifield and Mariya Agapova makes her highly anticipated next fight against Shana Dobson.

We’re a little late getting this fight card preview posted, so we’ll dive right in with odds from BetOnline Sportsbook and look at all 10 matches, with some extra detail on the main card scraps.

Action begins at the UFC APEX facility with a couple of newbies. It will be Guam’s Trevin Jones in the +350 underdog role against Russia’s Timur Valiev. Valiev is the -450 favorite in a fight juiced at over 2.5 (-185), so it looks as though the judges will be required in the first bout of the night. Valiev, a veteran of six WSOF fights and a three-fight stint in PFL, is 16-2 in his career with six straight wins. Jones, a longtime PXC fixture, is 12-6 in his career and only has six finishes. Valiev is a justifiably large favorite here and he should take the decision triumph. The over is heavily juiced, but the two fighters have each only been finished once.

Carlton Minus is the appropriately-named minus price here as the favorite at -118 for his match against Matthew Semelsberger. Minus has spent ample time in the Alaska Fighting Championship and Semelsberger has bounced around since getting his start in Shogun Fights. He’s 6-2 with four KO wins and a sub win. Minus has six knockouts and a sub win of his own. Minus’s only career loss came to former UFC fighter Rick Story in PFL. Neither guy has an extensive resume, but the line move on Minus is pretty telling, as he started as an underdog in the fight.

36-year-old Ike Villanueva will suit up for the first of three light heavyweight matches on the card. Villanueva is the even money underdog against Jordan Wright. Wright is 10-0 in his career with a No Contest back in June 2018 on the Dana White Contender Series. As we know, Hernandez has gone on to some pretty big UFC fights. Wright, meanwhile, went back to LFA and beat Gabriel Checco back in January. Villanueva had a four-fight winning streak snapped with a loss to Chase Sherman back on March. We’ll take the slight favorite to make it two consecutive defeats for Villanueva.

A toss-up bout between Austin Hubbard and Joe Solecki in the lightweight division looks like a good one. Hubbard’s win over Max Rohskopf back on June 20 was one of the most impressive performances of the night as he won by TKO with a doctor’s stoppage. It was a strong bounce back performance after losing to Mark O. Madsen at UFC 248. Hubbard, though, has gone just 2-2 in his UFC fights. Solecki, a Dana White Contender Series find, beat Matt Wiman back in December, but hasn’t fought since, so he’ll have a little cage rust against Hubbard, who is coming off of a top-notch performance. Hubbard at -110 seems more attractive than Solecki here.

The first of two women’s fights is the last fight on ESPN+. Amanda Lemos will make her third UFC appearance, this time as a +108 underdog to Mizuki Inoue. For the most part, Inoue has only lost to really good fighters. She has five career losses. Virna Jandiroba, Alexa Grasso, and Karolina Kowalkiewicz have three of them. She was disqualified against Emi Tomimatsu and her first loss came to Ayaka Hamasaki, who has held the title multiple times in her career but hasn’t gotten a UFC shot. Lemos is 7-1 and 1-1 in the UFC, but she doesn’t have the resume of opponents or the career success of Inoue. This -128 price on Inoue looks a little bit light.

BET ON UFC ON ESPN 15 AT BETONLINE SPORTSBOOK!

Dwight Grant has quite a bit of cage rust to shake off heading into his fight against Daniel Rodriguez. This will be Grant’s first fight in 16 months since he beat Alan Jouban at UFC 236 by a split decision. Grant is 10-2 in his career with zero stoppage losses. One of his losses was his official UFC debut against Zak Ottow by controversial split decision.

He draws a bad matchup in the 33-year-old Rodriguez because the favorite is a very aggressive fighter. He keeps pressing forward. With the smaller UFC APEX Octagon, there is nowhere to hide. This is only the third UFC fight for Rodriguez, but his third of 2020 and he’s 2-0 with a sub win and a unanimous decision over Gabe Green in which he won 30-27 across the card. He was easily the more successful striker. He should be in this fight as well, even though he got the call to fill in very late.

Valentina Shevchenko will be watching closely on Saturday when Mariya Agapova returns to the Octagon for her second fight in as many months. There isn’t much to say about this fight other than Agapova is going to win and await her next opponent in the women’s flyweight division. She’ll have to work her way up the rankings, but with the start to her UFC career with a dominant win over Hannah Cifers, she sure seems to be on track to face Shevchenko in late 2021.

Credit to Shana Dobson for taking this fight, but with three straight losses to Lauren Mueller, Sabino Mazo, and Priscila Cachoeira, the outcome here seems all but certain.

At least this fight should be a lot more competitive than the women’s one. Marcin Prachnio has his back against the wall. He hasn’t fought since September 15, 2018 and sits at 0-2 in the UFC. He was 13-2 before he got to the top of the mountain by getting a UFC contract. It turns out that a jump from One Championship to UFC is a difficult thing. He’s lost to Sam Alvey and Magomed Ankalaev by first-round knockout.

We’ll see if he can get into the second round against Mike Rodriguez. The 6-foot-4 Rodriguez has had some challenges in UFC. He’s 1-2 with a no contest, but it was actually a loss to John Allan, who then tested positive for a banned substance. Rodriguez has his back against the wall as well with what amounts to a 1-3 record. These are two guys that aren’t really worthy of your hard-earned money because you have a long layoff with the disappointing Prachnio and then Rodriguez.

The over 1.5 looks best here. Rodriguez has gone at least three minutes into the second round in three of his four UFC fights. Prachnio is stepping down in class enough here to get deeper into the fight.

Ovince Saint Preux has lost three of his last four fights. His only 2020 showing was a split decision loss in kind of a bland fight against Ben Rothwell. Neither fighter landed a ton of strikes, but Rothwell controlled the fight and won by enough on the stat sheet to get the win. OSP is fighting for the 39th time and it does feel like the 37-year-old is running out of tread on the tires to a degree.

Alonzo Menifield is looking to bounce back from a loss to Devin Clark. It was his first non-finish in his career and his gas tank was not up to par in that fight. He had won all but two of his fights in the first round by stoppage. That is really the key to this fight. If Menifield can finish it early, as he has so many other opponents, he’ll be in great shape. If not, OSP’s cardio could be enough to get the win in the third round or by decision.

Menifield has the higher upside, but a live bet on OSP late might not be a bad idea if the fight isn’t over before then.

Either this is a bad matchup for Frankie Edgar or the betting markets believe that his best days are behind him. Or maybe it’s just a little of both. The 32-fight veteran is now 38 years old and he’ll come into the cage with losses in three of his last four fights. Chan Sung Jung beat him with a first-round knockout in December and that was the second one of those for Edgar in his last three losses.

Pedro Munhoz is shaking off a lot of rust. He hasn’t fought since getting beaten up by Aljamain Sterling at UFC 238. Munhoz had COVID-19 earlier this year and this fight wound up getting pushed back. Munhoz has never been stopped in his career, so Edgar will either have to get through the championship rounds or do something that nobody has done to this point. That seems like a tall ask with Edgar right now.

You could cut down the juice on Munhoz and take him by stoppage. You could also take Edgar by decision if you like the upset because 12 of his 22 career wins are by decision, but Munhoz should be the victor here.