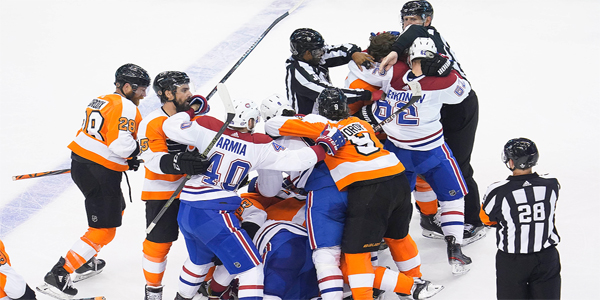 The Montreal Canadiens were an underachieving team during the season because Carey Price wasn’t his usual self. The Canadiens also couldn’t finish off enough of their scoring chances. In the 2020 NHL Playoffs, they’ve lived up to their potential, but it still may not be enough to get past the Philadelphia Flyers in the first round.

In fact, they face elimination on Friday night in Game 6. The Flyers are a -135 favorite at BetDSI Sportsbook to finish off the series, but you definitely don’t want to count the Canadiens out.

Carter Hart has a high-danger save percentage of 93.75% in the series, 1.16% better than that of Carey Price. Much like Price was a difference maker in Montreal’s Qualifying Round series win over the Pittsburgh Penguins, Hart has been the difference maker in this series. Hart has a .935 SV% with 129 stops on 138 shots. He has allowed nine goals and Price has only allowed eight with a .939 SV%, but Hart has made the bigger saves at the bigger times. Also, Montreal scored five of their 11 goals in their 5-0 Game 2 win.

The task at hand got even tougher for the Habs. Brendan Gallagher, who has a goal and two assists and leads Montreal in shots on goal in the series, will be out with a broken jaw. He’ll miss Game 6 and Game 7 if there is one following a suspension-worthy play by Matt Niskanen. Gallagher is a far greater loss, especially for a team that can generate chances, but struggles to cash them in.

The Habs have had some adversity in this series for sure. Head coach Claude Julien was hospitalized for chest pains and has been away from the team. They’ve still found ways to compete and Price has continued to play at a high level to give them a chance night in and night out. Somebody will have to step up in Game 6.

How about Jonathan Drouin? He hasn’t scored yet in the series, but has four assists. How about another big effort from Joel Armia, who has three of Montreal’s five 5-v-5 goals? How about 20-year-old Nick Suzuki, who stepped up with his first goal of the series in Game 5?

Therein lies the problem for the Canadiens. They don’t have a lot of offensive guys that can step up in Gallagher’s absence. The Flyers have gotten a monster series from Jakub Voracek, who has four goals and two helpers. Three of his goals have come on the power play, where the Flyers and Canadiens each have four goals. Outside of Voracek, though, the Flyers haven’t gotten a ton of offensive contributions. Somebody is going to have to step up on that side as well.

Rather than take a side here, the under 5 is only juiced at -120. Scoring opportunities look few and far between in such a decisive game and both goaltenders are playing at world-class level. The Flyers are coming off of their worst game of the series, so they should button things back up. The Canadiens are going to have to adjust to the loss of Gallagher and that may mean tightening up even more defensively.

There just hasn’t been a whole lot of open space for the most part. In fact, Game 3 only had 31 total scoring chances and Game 4 only had 32. I would expect a game played more like that here in Game 6.

BET THE UNDER IN GAME 6 FLYERS VS. CANADIENS