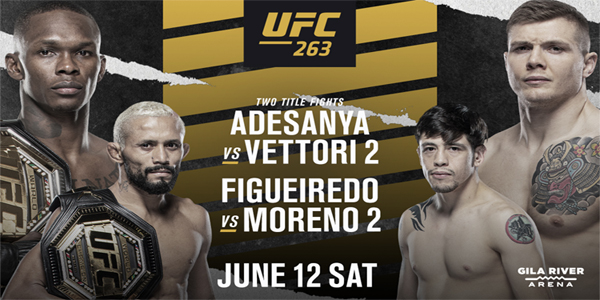 Gila River Arena in Glendale, Arizona will be full and fight fans around the world will be tuned in for UFC 263. This is a huge card with 14 fights scheduled to take place, including two championship bouts. The UFC Middleweight Championship will be up for grabs between Israel Adesanya and Marvin Vettori and we’ll get another rematch for the UFC Flyweight Championship between Deiveson Figueiredo and Brandon Moreno.

Those aren’t the only fights on a great card filled with a lot of name value. Action begins at 6 p.m. ET on ESPN and ESPN+ and will run deep into the nighttime hours and leak over into Sunday morning. This Saturday June 12 card is one of the best of the year and we have a lot to discuss.

We’ll do so by utilizing the odds from BetOnline Sportsbook, where you can sign up and get a 50% Deposit Match Bonus up to $1,000.

This fight card begins with a heavyweight matchup between Jake Collier and Carlos Felipe. This will be Collier’s third fight at heavyweight and third fight since returning after a 2.5-year hiatus in July. Collier is 1-1 since the return, as he won over three rounds against Gian Villante in his last fight. Felipe is 2-1 in UFC and all three fights have gone the distance. The 26-year-old Felipe hasn’t been terribly impressive so far, so Collier at +145 might be worth a look.

The third UFC fight for Luigi Vendramini doesn’t appear to be a good matchup. We’ve seen pretty heavy line movement on the much taller Fares Ziam for this fight at 155 pounds. Vendramini returned from more than two years away to beat Jessin Ayari back in October by first-round knockout. Ziam also returned from a long layoff to beat Jamie Mullarkey back in October.

Ziam has the big size advantage here, which could very well be the biggest reason for the move. Neither guy fought great competition coming up the ranks and neither guy has much of a UFC track record. There are better fights to bet.

Steven Peterson hasn’t been in the Octagon since September 21, 2019, so he’ll be shaking off a lot of cage rust for this fight against Chase Hooper. We’ve seen Peterson the preferred betting side here, as he’s now a clear favorite over Hooper, who is 2-1 in his UFC career. Peterson has a lot more data points at the UFC level, but lost three of five fights prior to going AWOL.

Peterson’s knockout of Martin Bravo was pretty random, as he happened to catch Bravo at the right time when he was trying to land a spinning backfist. Hooper has gone deep into the third round in each of his last two fights. The under 2.5 looks like one of the best bets of the prelim card.

This is a late switch to the card, as Frank Camacho was injured in a car accident a few days prior to the fight card. Terrance McKinney will step in on short notice against Matt Frevola. Frevola has gone through a full fight camp, but does now have to pivot to face a different opponent. McKinney lost on the Dana White Contender Series in 2019 to Sean Woodson. The LFA fighter is stepping up in a big way here. Frevola is likely the right side, maybe as an open parlay piece. McKinney just fought last Friday in LFA.

This UFC card is light on women’s fights. We have one here in the bantamweight division between Alexis Davis and Pannie Kianzad. Davis ended a three-fight losing streak with a nice win over Sabino Mazo back on February 27. Kianzad is 3-1 in UFC since losing her debut to Julia Avila.

Six straight fights for Davis have gone the distance and five straight for Kianzad and nine of her last 10. The -350 is heavy on the over 2.5, but this looks like a great open parlay piece.

This is a hell of a fight to be buried on the undercard. Hakeem Dawodu is 12-1-1 in his career and rides a five-fight winning streak into this matchup against undefeated Movsar Evloev. Dawodu has won three of his last four fights by split decision, which is a big reason why Evloev is such a large favorite in this fight.

Evloev is coming off of a split decision win of his own against Nik Lentz. He’s 4-0 in the UFC and all four wins have been by decision. In that UFC 257 win over Lentz, Evloev fought Lentz on short notice as an injury replacement and it was his first fight since battling COVID. Statistically, the fight wasn’t that close.

Evloev is a great bet here. The -230 price looks a little bit cheap.

The other women’s fight features Joanne Calderwood in her 21st career MMA fight against Lauren Murphy in her 19th. A couple of UFC veterans in the flyweight division battle here, as the 35-year-old Calderwood has taken the majority of the bets against the 37-year-old Murphy.

Murphy has won four in a row, including some nice wins over Roxanne Modafferi and Angela Lee. Calderwood has alternated wins and losses in her last four fights. It makes sense that Murphy would have gotten preferential treatment on the opening odds, but the money has hit Calderwood. It’s hard to argue with a move like that from sharper UFC bettors. It’s a tough fight to handicap. Murphy has more paths to victory and has been better lately, so a slight lean her way, but there are other fights to bet.

Eryk Anders got called for an illegal knee to the head on Darren Stewart when the two fought back on March 13. The rematch is now. Anders was coming off of a loss to Krzysztof Jotko going into that Stewart fight and he is just 3-5 in his last eight UFC fights with that No Contest in the most recent one. Anders was having an excellent first round when he dropped the illegal knee.

Stewart looked poorly prepared for the fight, as he, too, has experienced some recent losses. He beat Maki Pitolo by first-round submission, but also lost to Kevin Holland and Bartosz Fabinski in 2020. Unless something changes with the line, these two guys are both nearly impossible to bet right now.

Brad Riddell is 3-0 in the UFC, but he faces his stiffest test yet in Drew Dober. Riddell has wins over Jamie Mullarkey, Magomed Mustafaev, and Alex Da Silva, all by decision. He had five knockouts on his way to the UFC, but hasn’t been able to win in that manner since joining the promotion.

Each of the last five fights for Dober has ended with a stoppage. He’s been on the winning side in all three knockouts, but has lost twice by submission. His takedown defense is not up to par and he has now lost four times via sub. The problem here for Riddell is that he does not have a great ground game. He has no submission wins to his name. While Riddell may be up to the challenge of a guy like Dober, this is a bad matchup for him. Dober should win and send us into the main card.

Undefeated Jamahal Hill is a big favorite against Paul Craig as light heavyweight action opens up the main card. Hill should be 9-0, but a positive marijuana test after his win over Klidson Abreu resulted in his win being wiped off the board. He really hasn’t been in trouble in any fight since joining the UFC, but this will be his biggest test to date.

Paul Craig scored a knockout win in the rematch against Mauricio “Shogun” Rua back in November to improve to 14-4-1 overall and 5-4-1 in the UFC. This will be Craig’s first fight against a taller opponent since his submission win against Vinicius Moreira, but Moreira has lost four in a row and may not fight in UFC again. Craig wins on the ground and Hill wins by keeping the fight on his terms. The longer, more athletic Hill seems like a tough matchup for Craig.

How many more fights does Demian Maia have in him? The 43-year-old will step into the Octagon for the first time since right before the COVID shutdown to take on Belal Muhammad. Maia lost to Gilbert Burns by first-round knockout. He had won his previous three fights, but hadn’t really fought anybody good in the span.

Belal Muhammad could not continue after two eye pokes from Leon Edwards back on March 13. He wanted an Edwards rematch, but gets Maia instead. This has to feel like a step down for Muhammad here. He has to win the fight for future purposes, but you do wonder if maybe this is a fight that doesn’t really get him jazzed up. Maia isn’t as dangerous as he used to be, but I feel like this fight ends up going to the cards.

This fight will be slated for five rounds if it goes that far. Instead of the Belal Muhammad rematch, Leon Edwards slots in as a huge favorite against Nate Diaz. This fight honestly isn’t even worth really talking about. Diaz hasn’t fought in a year and a half since he got badly beaten up by Jorge Masvidal. He beat Anthony Pettis at UFC 241, but Pettis isn’t even in the UFC anymore.

Edwards should win, but -600 is a big price. Maybe an open parlay piece or something. Edwards had 5:18 of fight time against Belal Muhammad before the eye pokes ended the fight. That was his first fight in 20 months. This is a waste of a fight.

Many bettors are probably wondering why this line is so big given that the last fight between the two ended in a draw. The headline fight at UFC 256 did feature Figueiredo as a -300 favorite, so there has been an adjustment to the line. It was about as even of a fight as you can get. Figueiredo won on one of the three cards, but the fight was a majority draw.

It was maybe the best performance from Moreno that we’ve seen. He exhibited solid takedown defense and had more control in the fight. He threw more strikes, but did land a lower percentage than Figueiredo. It was one of the best fights of the year.

Figueiredo was also in the hospital the day before the fight. He won the title and had two title defenses in 2020, including one just mere weeks before the Moreno fight. Moreno also fought on that same UFC 255 card.

I have to take Figueiredo here with the depressed price and more recovery time. He wasn’t at his best in that first fight, whereas it seemed like Moreno was about as good as he could be.

How will Israel Adesanya respond to his first career loss? The UFC Middleweight Champion tried to become a champion in two divisions when he fought Jan Blachowicz at UFC 259 for the Light Heavyweight Title. He came up short, taking a pretty big beating from Blachowicz over five rounds. The stronger, bigger Blachowicz landed a lot more strikes and Adesanya failed to record a takedown.

Now Adesanya takes on a much smaller fighter and a guy more on his level in Marvin Vettori. Vettori has won five in a row since that split-decision loss to Adesanya. You know he wonders what could have been with where Adesanya’s career has since gone. He’s deserving of a rematch here and the 27-year-old’s ground game could be a huge help.

Adesanya’s takedown defense has to improve from the Blachowicz fight. He also needs to be more assertive and aggressive in the rematch than he was in the first fight. All in all, Adesanya should win, but the +224 price on Vettori is a little bit appealing. It’s a title fight and you want to have a bet. The best play is to sit this one out, but Vettori has a chance here.