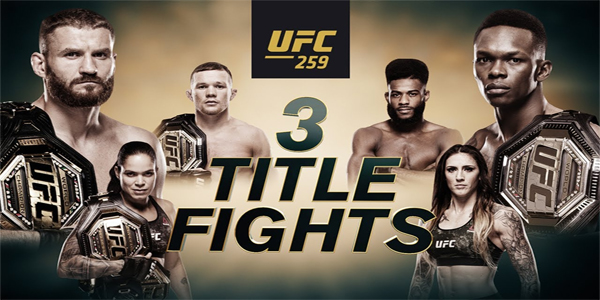 Three title fights. That is really all that needs to be said about UFC 259 on Saturday March 6 at the UFC Apex in Las Vegas. Israel Adesanya and Jan Blachowicz will meet for the light heavyweight title at 205 pounds in the main event. Amanda Nunes is a huge favorite to defend her women’s featherweight strap against Megan Anderson. Aljamain Sterling will look to get the bantamweight belt from Petr Yan.

What a loaded fight card. What a great event we have here. Four champions fighting for three belts is the stuff of legend and this is a massive event with a massive draw.

It should also lend itself well to lots of betting opportunities as well. While the three main fights are the focus, we’ll break down all of them with odds from BetOnline Sportsbook and see if we can pick out some winners for Saturday’s mega card.

The first of 15 fights slated for the UFC 259 card features Trevin Jones and Mario Bautista. Jones won his UFC debut back on August 22, but the knockout was overturned due to a positive pot test. Bautista is 2-1 in the UFC, with his most recent fight coming more than a year ago. Bautista’s only loss was to Cory Sandhagen in his debut, so he gets the big favorite nod here. There isn’t a ton of betting interest for me in this fight.

Aalon Cruz is a very long-limbed lightweight that lost his debut to Spike Carlyle back on February 29, 2020 to fall to 8-3. Uros Medic is 6-0 with six finishes, including one in front of Dana White on August 4 to get himself a contract. Medic is 27 from Serbia and most of his appearances have been in AFC. Cruz didn’t fight in too many big promotions and is already 31. This seems like a decent spot for Medic to look good as something of a prospect, so -160 might be reasonable.

Livinha Souza finds herself a big underdog to Amanda Lemos, despite winning three of her four UFC fights, including a nice win at UFC 252 over Ashley Yoder. Souza is 14-2 in her MMA career with 10 stoppage wins, though each of her last three fights has gone the distance. It is surprising to see Lemos priced so high here with a 2-1 UFC record and wins over Mizuki Inoue and Miranda Granger. An upset wouldn’t be shocking here at all.

Jake Matthews faces long odds to be the first to beat Sean Brady. The longtime UFC fixture has won three straight, but hasn’t really beaten anybody of great consequence in those fights. Brady is off to a 3-0 start in UFC, but he also hasn’t beaten anybody all that strong. Brady is 13-0 overall with seven decision victories and six wins by stoppage. Each of the last three fights for Matthews have gone the distance and he’s won them all in unanimous fashion. This could be a good, back-and-forth fight, but Brady should ultimately prevail.

Kennedy Nzechukwu is 1-1 on this UFC contract and hasn’t fought since August 3, 2019, so this is a big fight for the lanky Nigerian against Carlos Ulberg. Nzechukwu may very well have lost his last fight against Darko Stosic, but Stosic was penalized two points for low blows with illegal groin kicks. Nzechukwu ended up winning the fight by unanimous decision, but struggled throughout. This is the official UFC debut for Ulberg, who won on the Contender Series back in November and got a contract out of it. He only has five MMA fights to his name over nine years, but has had great success when he’s been in the cage. This is a big price for him, though, as something of an unproven fighter.

Tim Elliott ended a three-fight losing streak against some outstanding competition with a win over Ryan Benoit back in July. Elliott had lost to Brandon Royval, Askar Askarov, and Deiveson Figueiredo prior to that win. The 34-year-old doesn’t have a great record, but he’s been around a long time and has run into some very good opponents. It would be hard to say that Jordan Espinosa is a good opponent. He’s dropped three of his last four fights. Money has hit the board on the 31-year-old, but Elliott’s recent run of losses was more about who he fought, not how he fought. I like the dog here.

Kai Kara France has been a popular betting option in this flyweight fight against Rogerio Bontorin. Bontorin lost last time out to Ray Borg, but that was over a year ago. Prior to that, he was 3-0 in UFC. This is a really big opportunity for Bontorin against a longtime fixture in the division in France. This is France’s sixth fight since the start of 2019. He’s only 3-2 in those fights, but lost to Brandon Royval and Brandon Moreno, so two really good flyweights. This price still seems reasonable on France. It’s not big enough to be cost-prohibitive yet.

Is this a changing of the guard fight? Doesn’t it feel like one? Undefeated Askar Askarov takes on his most accomplished opponent to date in Joseph Benavidez. The underdog here in Benavidez is 36, coming off of back-to-back stoppage losses to Deiveson Figueiredo. Those were the second and third finishes of his career and Benavidez struggled regarding the loss in his post-fight interview. He’s on the verge of being done and he knows it. Askarov has a golden chance to vault him in the flyweight rankings and he should. This is a cheap price in a flyweight fight as well.

Kyler Phillips went 2-0 in 2020, but he steps up in class in a big way here against Song Yadong. Song only fought once in 2020, a win over Marlon Vera, but he’s taken on much better competition than Phillips. It will be interesting to see how Phillips fares against the 23-year-old. While Song is younger, he has 21 professional fights to just nine for the underdog in Phillips. This looks like too big of a leap for Phillips. He’s been impressive, but Gabriel Silva was on his level and Cameron Else was beneath him. Song is a clear upgrade.

This will be an interesting fight for Dominick Cruz. It will be his first since September 27, 2014 without a title on the line. Cruz returned on May 9 for UFC 249 to fight Henry Cejudo for the bantamweight championship and lost. Cejudo went out on top shortly thereafter, but Cruz is now back, seemingly for good. He draws Casey Kenney here at 135 pounds. The 29-year-old Kenney won twice in the span of three weeks back in October to go 3-1 in 2020.

Kenney fought good, but not great, competition last year. We really have no idea what Cruz is at this point. He lost to a double champ in Cejudo, one of the best to ever do it, so Cruz’s first fight in 3.5 years may not have been the best barometer. Money has hit the board on Kenney, but I think Cruz is live here.

Do we get the Thiago Santos that beat Jan Blachowicz on 2/23/19 or do we get the one that lost a war to Glover Teixeira back in November? What do we get from the 37-year-old who is less than two years removed from going the full 25 in a controversial decision with Jon Jones? It is anybody’s guess as he gets ready to face Aleksandar Rakic at 205 pounds in the first fight of the main card on Saturday.

Rakic is coming off of a nice bounce back win over Anthony Smith following just the second loss of his career. Volkan Oezdemir won by split decision in what was a very questionable outcome. The 29-year-old Rakic is fighting a very accomplished opponent here, who has aged pretty gracefully overall. This is a tough one to handicap, but I think Santos has another big effort in him.

This matchup was supposed to happen nearly five years ago. It’s fair to wonder what the line would have been like then. It would have been Islam Makhachev’s first fight since his loss to Adriano Martins in his second career UFC fight. Now the two will meet with Makhachev on a long layoff of more than a year and a half. He has won all six of his fights since the Martins loss, but has not fought since September 2019.

The 32-year-old Dober won twice in 2020, with KO wins over Alexander Hernandez and Nasrat Haqparast. His three-fight winning streak also includes a victory over Polo Reyes. Dober is giving up some size here and apparently a lot more than that given the huge line on this fight. It is so hard to back guys on elongated layoffs like Makhachev at big prices. I don’t really have a play here, to be totally honest. Perhaps a slight lean to the under at the plus-money price.

The first of three title fights has the closest odds, as Bantamweight Champion Petr Yan looks to defend against Aljamain Sterling. This will be the first defense for Yan, who won the vacant belt against Jose Aldo back at UFC 251. Yan and Sterling were supposed to fight at UFC 256, but the fight was pushed back to this mega card.

Sterling has become a much more polished fighter since his loss to Marlon Moraes by KO back in December 2017. He’s won five straight, three by unanimous decision and two by submission. Yan lost to Magomed Magomedov back on March 26, 2016 in ACB and has not lost since, including a perfect 7-0 record in the UFC.

Where this fight takes place will be the deciding factor. Sterling likes to have ground control and win fights on the mat. Yan has seven knockout wins, but has also done enough to win seven times by decision. Sterling is the longer fighter, but Yan is the better striker. If Sterling keeps Yan to the outside and uses his longer limbs for takedowns, he should have great success in this fight. That’s what I’m looking for here.

The UFC really needs some better challengers. Amanda Nunes and Valentina Shevchenko seem to have very little to worry about in their fights these days. Nunes is a -1400 favorite here against Megan Anderson. The 31-year-old Anderson wanted the title shot and she got it.

The most recent title defense for Nunes came against Felicia Spencer, a fighter that beat Anderson in the first round back in 2019. Anderson has a big height advantage here, but that’s the only advantage.

Henry Cejudo. Conor McGregor. Daniel Cormier. Amanda Nunes. That is the list of fighters to hold two belts simultaneously in the UFC. Israel Adesanya will look to be the fifth as he takes on Jan Blachowicz with the light heavyweight title on the line. Adesanya is already the middleweight champ. Adesanya enters this fight at 20-0. Blachowicz is 27-8 and in search of his first title defense after beating Dominick Reyes at UFC 253.

Adesanya was on that same card and he made efficient work of Paulo Costa to defend the middleweight belt for the third time. Adesanya is a huge middleweight at 6-foot-4, so the size disparity isn’t a big worry here moving up a weight class. The 38-year-old Blachowicz has big punching power, but he won’t have the quickness or the athleticism of Adesanya. While light heavyweights are far from the big, plodding guys of the next division, you don’t see much speed in this division. Adesanya will be on another level.