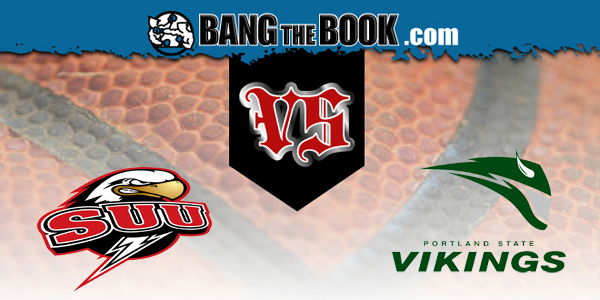 We’ve got a busy college hoops card, as some conference tournaments get underway and a lot of additional action takes place. Villanova got there for us yesterday, so we’re 3-0 on the spotlight games for this week at BangTheBook.com. Let’s see if we can keep this rig rolling and grab another winner.

With a little bit of a late start today to the article, we’ll have to dig deep and find a late game of interest. That game will be in the Big Sky Conference, where Southern Utah and Portland State square off. This is an a game featuring an angle that I’ve had my eye on for quite a while and one that I hope comes to fruition for us.

Per the odds at Bovada Sportsbook, Southern Utah is -2 with a total of 147.5.

Southern Utah is 17-3 on the season with a 10-2 conference record. They’ve been outstanding. They’ve also faced the 338th-ranked schedule in college hoops and have gone 6-1 in games decided by six or fewer points, so they’ve been living right in a lot of different ways.

Here’s another thing that really stands out about Southern Utah. Only six of their 20 games have been played on the road. This is a team that takes a lot of three-pointers. SUU is 38th in the nation in 3P Rate at 43.7%. They’re only shooting 33.1% on those shots. On two-point shots, they are 27th in the nation at 54.7%. They rank really highly in a lot of key offensive metrics, but I wonder how much of that is a byproduct of simply playing at home a lot.

In road and neutral settings, Southern Utah has overachieved a bit on two-point shots at 55.1% and is a little lower on threes at 32%. Any offensive deviation is a big deal because this is a terrible defensive team. Overall, Southern Utah is 304th in the nation in eFG% defense at 53.6% and that is against one of the worst schedules in college basketball.

About the only thing Southern Utah does well defensively is rebound. Opponents have shot 37.4% on threes against this team. Even Northern Arizona, a really bad offensive bunch, went 23-of-53 on threes in the most recent two-game set.

Portland State is not a good offensive team, but they are trending in the right direction a little bit. This is a team that ranks outside the top 300 in 3P% and 2P% overall, but has won seven of its last nine games and the losses have been in overtime to Montana and by two at Northern Colorado. This is a team that has really started to play better, anchored by a defense that is one of the best in the Big Sky.

Portland State has the conference’s top TO% at 25% and also leads in adjusted defensive efficiency. The Vikings have held opponents to just 46.5% on two-point shots. They haven’t had the same luck at Southern Utah. They are just 2-4 in games decided by six or fewer points. They are also 343rd in Bart Torvik’s F.U.N metric, which stands for Failure Unexplained by Numbers. That means that this should be a better team, but circumstances have made things a little more difficult.

The offense might be coming around a little bit as well. In four of the last five games, Portland State has gotten over a point per possession. With a defense that hasn’t allowed more than .948 PPP in its last seven games, things are looking up. The strength of schedule in that span has been all over the map, but the Vikings are still starting to find their stride late in the season.

So, I guess that’s sort of a spoiler alert here that I’m taking Portland State +2 and also sprinkling the money line here with something like a 70/30 split. Southern Utah has not played a lot of road games and is also a team that has a bad defense. They’ll have to score to win and scoring seems a bit tougher with the way that Portland State is playing right now.