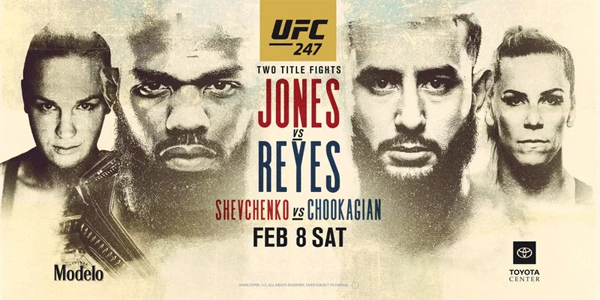 The Toyota Center in Houston, Texas will be abuzz this weekend with UFC 247 and a main event of Jon “Bones” Jones vs. Dominick Reyes for the light heavyweight championship. That is the last of 12 fights scheduled for Saturday’s card that also includes a title fight in the women’s flyweight division between Valentina Shevchenko and Katlyn Chookagian.

We’ll be breaking down all 12 fights for you with assistance from the odds at 5Dimes and we’ll be taking a little bit deeper of a look at the five fights that make up the main card. Action can be seen on UFC Fight Pass/ESPN+ for the early prelims, ESPN for the primary prelims, and then PPV for the main card.

A few changes have taken place recently with the card. Jimmie Rivera and Marlon Vera was taken off with an injury to Rivera. Also, Dhiego Lima was bumped from the card with injury and his place has been taken by Kalinn Williams against Alex Morono.

We start in the featherweight division with Austin Lingo and Youssef Zalal at 145 pounds. Lingo is a -210 favorite with +175 on the takeback for Zalal. Both fighters are new to the UFC, but they were in LFA together. They never wound up fighting each other, but will get the chance here at UFC 247. Zalal has lost two of his last three fights, while Lingo comes in perfect. We could see a stoppage winner here with five stoppage victories out of seven total wins for each fighter. That may be the way to go when round props open.

Andre Ewell is now a -120 favorite over Jonathan Martinez in the bantamweight division. Ewell is coming off of a loss to Marlon Vera with a third-round knockout in what was a very vicious fight between the two combatants. That was Ewell’s second loss in his last three fights. He is 2-2 in UFC since making the leap from CES. Martinez is 2-1 with back-to-back wins over Liu Pingyuan and Wuliji Buren. Sharper money has spoken in this fight on Ewell, but the better look is over 2.5 when round props open. Ewell has been stopped in those two losses, but both came late in the third round.

Domingo Pilarte is -130 and Journey Newson is +110 as the Fight Pass portion of the card wraps up. Pilarte lost his official UFC debut in July after performing on the Dana White Contender Series nearly a year prior. Newsom also lost his UFC debut to Ricardo Ramos back in June. It has been a bit of a long layoff for these two fights, so cage rust could be a factor. Newsom got caught with a couple spinning elbows in the Ramos loss. It’s fair to wonder if Pilarte has that type of trick in his bag. The underdog may be worthy of a look here.

To ESPN we go for the next part of the prelim card. Miles Johns puts his 10-0-0 record on the line against Mario Bautista. Johns is -140 to stay unblemished. He won his debut fight in the UFC over Cole Smith back in September, but it was in a split decision. Bautista is one up and one down in his UFC career with a loss to Cory Sandhagen and a unanimous decision win over Jin Soo Son. Johns is giving up a little bit of height and reach here and Bautista is the more active striker. The underdog looks interesting here as well, so long as this fight stays upright.

Kalinn Williams faces long odds on short notice against Alex Morono in the welterweight division. Williams is +250 with Morono at -300. Williams has an impressive 9-1 record, but this is a massive step up in class to take on a very experienced UFC opponent. Morono is actually in a nice groove with three straight wins. Keep Morono in mind as a parlay piece.

The ladies take center stage for the first time as Andrea Lee lays a big -340 price against Lauren Murphy. Murphy’s +280 may not be high enough to consider the underdog here. Murphy came off of the shelf after 14 months off to knock out Mara Romero Borella, but she is definitely taking a big step up in class here and Lee needs a bounce back effort after the loss to Joanne Calderwood. Lee and Morono are two good open parlay pieces to put together and keep in mind for the round props.

Antonio Arroyo is +110 with Trevin Giles -130 on the comeback with the last fight before the main card. Arroyo was a two-time fighter on Dana White’s Contender Series before getting his shot on an official UFC card against Andre Muniz. He lost that fight by unanimous decision. Now he gets another crack, but with Giles, who has lost two straight fights, but would seem to be an upgrade. Giles has lost both fights by submission, so he needs a lot of work with his takedown defense, but he also fought more experienced guys in Zak Cummings and Gerald Meerschaert. Arroyo isn’t as experienced. That should give Giles a better chance.

Let’s see how this goes for Ilir Latifi. The Stockholm native is making the move up to heavyweight at age 36. The weight cut had to be tough for him, so now he’ll try his fortunes as one of the shortest heavyweights in the division at 5-foot-10. We can throw out most everything that Latifi has done to this point as he steps up a weight class to face Derrick Lewis.

Lewis has a massive size advantage here of over 30 pounds, five inches, and a whole lot of reach. This is a bad first matchup for Latifi, unless he can find a way to take Lewis to the ground. His quicks probably aren’t what they used to be, though, at age 36. If this stays on the feet, it is Lewis’s fight to lose and that seems highly unlikely.

Dan Ige comes into this fight against Mirsad Bektic with a four-fight winning streak. Ige has beaten Kevin Aguilar, Danny Henry, Jordan Griffin, and Mike Santiago. Bektic has split his last four fights down the middle and lost his only fight in 2019 to Josh Emmett by first-round knockout. This is a tough fight because Ige is the guy trending up, but Bektic is likely the better fighter overall, despite what his most recent fight would suggest.

Ige would like this fight to stay upright. Bektic’s biggest advantage could be taking this thing down to the ground to get top control and grind out a decision victory. Ige has been the more active fighter lately with five fights since the start of 2018. Bektic hasn’t been fighting as much and it does seem like Ige has made some changes to his game to be more dangerous than he previously was. The dog intrigues me here.

This isn’t the best card that UFC has put out. Here is another heavyweight fight with a pretty big number between Justin Tafa and Juan Adams. Tafa lost his UFC debut in the first round to fellow debutant Yorgan De Castro, who does look like a decent prospect and will draw Greg Hardy on March 28 in Columbus.

Juan Adams’s time in the UFC hasn’t gone well either. He did win his first fight over Chris de la Rocha, but lost in unanimous decision to Arjan Bhullar and then got pummeled by Greg Hardy. Adams is still a big favorite here over Tafa with a little bit more UFC experience and a huge size advantage of five inches and quite a bit of reach. It has to be Adams here. Size advantages are a lot to overlook in the heavyweight division since it is so dependent on striking ability.

Not much needs to be said here. They are trying to do whatever they can to find a contender to go up against Valentina Shevchenko in the women’s flyweight division and they just can’t. Katlyn Chookagian won by unanimous decision twice in 2019, but she just isn’t a versatile enough fighter to beat Shevchenko. She’s primarily a striker and those can be dangerous for champions, not to mention Chookagian’s size advantage.

The thing is that Chookagian just doesn’t have enough power. She only has two knockouts in 13 career wins. That won’t get it done. She needs to knock Shevchenko out because she’s highly unlikely to win a decision. That just won’t happen.

Is Jon “Bones” Jones on the verge of getting upset? He beat Anthony Smith by unanimous decision and then topped Thiago Santos by split decision. Now he fights unbeaten Dominick Reyes. Jones is more focused on trying to fight Stipe Miocic in hopes of following in Daniel Cormier’s footsteps. Is he going to take Reyes seriously in this fight? Does Reyes have enough to knock off Jones?

Only one guy has done that and it was Matt Hamill at the TUF 10 finale. Jones lost that fight by DQ. Nobody has ever actually beaten Jones. He beat Daniel Cormier, but popped a positive test and the fight was overturned. He even lost two points for an illegal knee in that fight against Smith and still won in unanimous fashion.

Reyes has fought a lot of the best guys that this division has to offer. He’s beaten Chris Weidman, Volkan Oezdemir, Ovince Saint Preux, and Jared Cannonier. The most recent performance for Jones was a dud. He was booed by the fans and didn’t show a whole lot of initiative.

There is a non-zero chance that Reyes pulls off the stunner here. He’s the best fighter Jones has faced in quite some time. As long as Jones is focused, though, he’s just too good for just about anybody else on the planet.