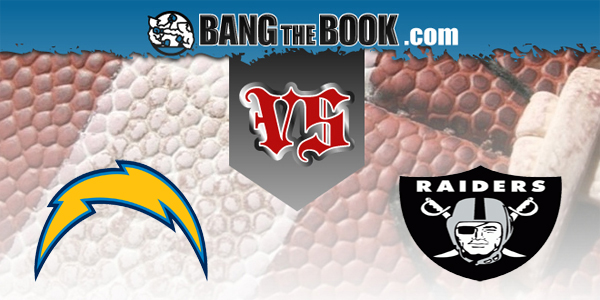 The Chargers obviously have no hopes for the playoffs, with a 4-9 record (4-7-2 against the spread). The Raiders are fighting for their playoff lives; with their 7-6 mark (both SU & ATS), they are behind the eight-ball. They have fallen behind Baltimore and New England is just a game behind them and has a tie-breaker advantage.

For the Chargers, the first meeting with the Raiders was gut-wrenching, as they thought they had scored a touchdown on the game’s final play, only to see it overturned. The result was a 31-26 defeat, one of five in which they were beaten by five points or less. That game, which was played on November 8, represented a 300-plus-yard effort by rookie quarterback Justin Herbert, who has 25 TD passes on the year.

The consensus is that head coach Anthony Lynn is going to be fired at season’s end. Some of what’s happened has been out of his control, but he has been cited for blowing things in the end game. But if there is something important that has been salvaged out of this wretched campaign, it’s that the Bolts have a quarterback they know they can go forward with.

The original thought about Herbert was that he was going to sit for a while as Tyrod Taylor kept the seat warm. That didn’t last long; Taylor was dislodged by a punctured lung that happened as a result of a botched medical procedure. So you might say that in the development of Herbert, the team is ahead of schedule.

Herbert has had one attempt shy of 500 in just twelve games, and part of the reason for that involves injuries in the backfield. But one of the good signs is that Austin Ekeler is back and productive. He had 146 yards from scrimmage in last week’s win over Atlanta – 79 rushing and 67 receiving. So more balance is quite possible.

So who’s charged (pardon the pun) with stopping Herbert and Ekeler?

It seems there is enough of a problem with the Raider defense that Jon Gruden fired Paul Guenther as coordinator. Admittedly there have been a couple of experiences that have been embarrassing. In last week’s 44-27 loss to the Colts, Indy had 456 yards, and ran over Silver and Black, with 6.8 yards a carry. The winless Jets had 206 rushing yards the week before, requiring the Raiders to get very lucky at the end.

Rod Marinelli has been named as the interim coordinator. He’s been this team’s defensive line coach, and was a coordinator in Dallas and Chicago, and worked under Gruden at Tampa Bay. BetOnline patrons may remember that he was also head coach of the Detroit Lions’ 0-16 team in 2008.

Said Gruden: “We need somebody who has a different perspective, a different approach.” I found that interesting, as it implies that Marinelli and Guenther may not have been on the same page. It is also interesting that this “new approach” doesn’t have much of a chance to take hold, with this four-day turnaround.

Currently Las Vegas is 26th in the league in yards allowed per drive and 28th in the red zone. They have allowed 4.7 yards per carry and 7.1 yards per pass. So we’re not all that confident in their ability to keep Herbert “short,” as he’s been in his last three outings (5.15 yards per attempt).

Some of the Bolts’ metrics don’t resemble that which you may expect from a 4-9 team. They are seventh in that “yards per drive allowed” category. They have also forced punts on 40% of drives (third best) and three-and-outs 22.3% of the time (6th).

And while we could have gotten another laydown from them, after the 45-0 loss to New England the week before, they fought until the end against Atlanta, winning 20-17 at the gun, albeit after an interception of Matt Ryan with 30 seconds left.

This may also be worth noting – the Raiders have covered only nine of 29 games in the 2nd halves of seasons going back to 2017. Inasmuch as Las Vegas’ “home field advantage” doesn’t mean too much to us – heck, the owner won;t even show up for home games – we think the more judicious play here is to take the points with the CHARGERS.

BetOnline makes your Thursday Night Football experience a lot of fun, because they bring you a lot of props to wager on that you may not be able to find anywhere else…….. And with Odds Booster, you can get greatly enhanced payouts on pre-selected parlays, every day…….. They make it easy to open an account, using every imaginable method, including Bitcoin, so there is simply no reason not to get on board!