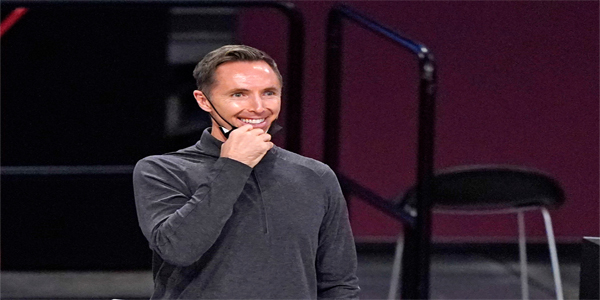 It was a pretty quick turnaround, wasn’t it? In the interest of getting back to as normal a schedule as possible, the NBA is starting the new season right before Christmas, and BetOnline is right on top of things with all the props and futures odds you can think of.

One field involves who will be voted the ‘Coach of the Year’, which usually denotes a pretty significant turnaround and is often friendly to guys in their first year on the job.

I’m not surprised that Steve Nash (+750) would be the favorite here, since the opinion of most people is that the Brooklyn Nets will make a quantum leap with Kevin Durant and Kyrie Irving playing together. But the state of affairs, in which Durant and Irving seem to have asserted that they will be involved with calling the shots, diminishes Nash’s stature in my view. Either you are the coach all the way or not at all, not a “co-coach,” which by the way might be what Mike D’Antoni is in this situation anyway.

As far as Tyronn Lue (+900), a former guard who’s been the coach for a championship team in Cleveland, I’m still waiting to see if he can have some success without being some superstar’s caddy. And in his new post with the L.A. Clippers, if he does well enough to merit consideration, he’ll still be holding the spit bucket for stars like Kawhi Leonard and Paul George.

I’ve always liked Monty Williams (+1000), and I wonder whether the people who vote on this award will give him some credit for how his Phoenix Suns finished up in the bubble a couple of months ago, winning all eight but still coming up short of a playoff spot. Now with Chris Paul, they may have an ingredient that was missing. Williams was probably the “coach of the bubble,” and may be able to use some of that momentum.

Conversely, Brad Stevens and Erik Spoelstra, both +1200 at BetOnline, have probably exhausted their “window” in this situation. Usually a coach who wins the award represents a situation that has improved a great deal from one season to the next, or has defied the odds in a big way. Stevens had a couple of occasions where he waged a great campaign, but how much could his Celtics possibly exceed expectations?

And Spoelstra’s golden opportunity was last season, when he did his best job putting together a rotation with two undrafted players and rookies and other inexperienced players and so on. It’s not a surprise if the Heat makes it to the first half of the playoff queue, and if they don’t make the Finals, it’ll be less of an accomplishment.

There are other interesting candidates on the list, and that includes James Barrego (+2500), who is gathering more and more talent in Charlotte, including LaMelo Ball, and if owner Michael Jordan can demonstrate that he can win at basketball without having to shoot one, this might be a good place for a long shot.

But I think the two best candidates might be a couple of old pros. Doc Rivers (+1400) gets to take advantage of a situation in Philadelphia that has unrealized upside, and he might just make an interesting pairing with the new exec, analytics guru Daryl Morey. Besides, Rivers is well-liked around the league, and the feeling is that he got a raw deal in his firing by the Clippers.

Stan Van Gundy (+1600) usually scoffs when somebody mentions analytics, but he’s got himself in a potentially good spot with the New Orleans Pelicans. He faces the possibility of having Zion Williamson healthy for a whole year, has an emerging All-Star in Brandon Ingram, a point guard in Lonzo Ball who can’t shoot but knows his place, and even though Jrue Holiday is off to Milwaukee, Eric Bledsoe replaces him with some demonic defense. And they’ve reached out and acquired a bruiser in the middle in Steven Adams, who should complement Zion well.