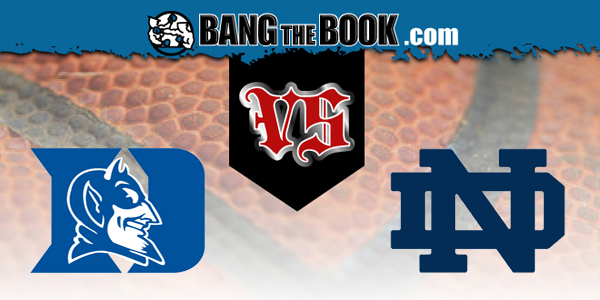 The last time we heard anything about the Duke Blue Devils, Mike Krzyzewski was making statements about how the season shouldn’t be played. That was immediately following an ugly loss at home to Illinois that prompted the bold call to end non-conference play.

We’re not sure what Duke will do without that tune-up game against Gardner-Webb, but the Blue Devils will be back on the floor to begin ACC play with a matchup against the Notre Dame Fighting Irish.

Despite Duke’s litany of problems, they are still -3.5 with extra juice at BetOnline with a total of 146. Most of the market sits on -4 and BOL will likely get back to that number soon.

Let’s see what this game holds with a breakdown and a suggested pick.

Cameron Indoor Stadium was a lot less crazy for Duke’s big non-conference games against Illinois and Michigan State. Both games went in the loss column. Now Duke, who hasn’t played in eight days, will try and right the ship against Notre Dame in the ACC lid lifter for both teams.

Dule beat Coppin State by 10 to open the season, which should have been our first sign that there were problems. The loss to Michigan State was followed by a win over Bellarmine by 22 when the Blue Devils looked more like the team we would expect. Then the Illinois game happened and Coach K wanted to pack up his ball and go home.

This isn’t to make light of the COVID-19 pandemic or the strain put on the players and coaches that are trying to do all of the right things. It is just hard to cry wolf when your team has faltered in its two biggest games while not missing any key players to the illness.

The cold, harsh reality is that Duke simply hasn’t played well enough. Duke combined to shoot 10-of-45 from three-point range in the two losses against legitimate competition and 22-of-53 in the two games against bottom-50 teams. The Blue Devils have turned the ball over too much and the shot selection has been poor.

Maybe a few extra days of practice will have helped.

The Fighting Irish have been tested early in the season. Losses to Michigan State and Ohio State are certainly understandable. The most recent win over Kentucky could be a springboard into this game against a similarly struggling powerhouse program.

Longtime head coach Mike Brey has to be pleased with what he’s seen offensively from his team. The Fighting Irish are shooting 41.6% from distance and 80% at the free throw line. On the other hand, they’ve been blocked almost as much as anybody else in the country and have not made more than 19 two-point shots in any game thus far.

Defensively, Notre Dame is not forcing turnovers. Their 13.6% TO% ranks 315th in the nation at present per Bart Torvik. Some extra possessions would help, especially for a defense that is decent, but nowhere near spectacular. The last two games for Notre Dame have been played to 67 and 66 possessions, so it seems like they’re making a concerted effort to slow down, possibly back to where they were a few seasons ago.

Some of that may have to do with a really shallow roster. A quartet of juniors in Nate Laszewski, Prentiss Hubb, Dane Goodwin, and Cormac Ryan play a ton and senior Juwan Durham makes up the bulk of the rest of the minutes. Those four juniors individually have all played at least 90.6% of the minutes this season for the Fighting Irish. In other words, they better not get into any foul trouble as the season goes along.

Is this price low because of the optics surrounding Duke? Maybe Coach K’s concerns were legitimate and weren’t said out of frustration about his team, but they’ve been interpreted as such, not just by bettors, but by fellow coaches.

You could make a strong case that Duke is clearly a better team, but continuity is a bit of an issue and now Johnson is out. Notre Dame, while short on depth, relies on five upperclassmen and a sixth off the bench.

This will be the first trip away from Durham for Duke. Between Krzyzewski’s comments and all of the freshmen on the roster, this could just end up being an uncomfortable trip.