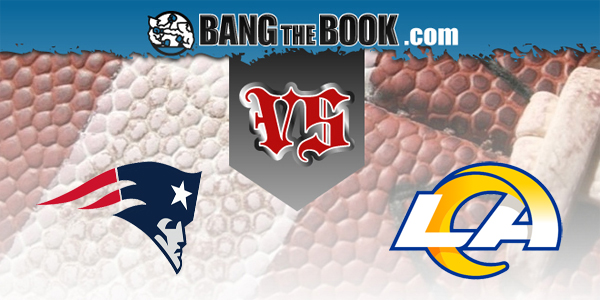 Could we say, with any kind of conviction, that the New England Patriots (6-6 SU & ATS) are really making their move? It’s hard to compare this version of the team with others of recent vintage, since Tom Brady is not a part of it. In fact, who would have stated before the season started that this club would be alive for the playoffs with a starting quarterback who had thrown just five touchdown passes?

On Thursday night, BetAnySports patrons will watch as the Patriots continue their quest for a post-season berth with a game against the NFC West co-leaders, the Los Angeles Rams (8-4 SU, 7-5 ATS). It begins at 8:20 PM ET at SoFi Stadium, and even after that kickoff, you’ll be able to place wagers in real time with Sports Betting Prime.

The Rams took advantage of a slumping Arizona team last week, rolling up 30 first downs and 463 yards of offense in a 38-28 victory. Jared Goff had 351 of those yards through the air, and his offense had enough of a ground game going to sustain his preferred play-action.

Goff put the ball in the air 47 times against the Cards. The Patriots’ approach was completely the opposite against the Chargers, as Cam Newton threw the ball only 19 times for 69 yards. New England ran for 169 yards and held the Bolts to just 3.6 yards per play in a 45-0 victory.

And they decided to stick around in the L.A. area, which made sense since they are playing at the same ballpark four days later.

In the Thursday Night Football odds posted on this game by the people at BetAnySports, the Rams are laying points:

The Rams possess some of the best defensive numbers in the NFL. In fact, they are second only to the Pittsburgh Steelers in terms of yards and points allowed on a per-drive basis. They have also forced the opponent into a punting situation more often than any other team (46.8%). And that might work well for them against New England, which has had some difficulty converting yardage into points.

According to drive stats (from the metrics folks at Football Outsiders), the Pats’ offense is an extremely solid fifth in the NFL in yards gained per drive, but only 21st in points scored per drive.

And Cam Newton hasn’t exactly set the world on fire with his arm either, as he’s thrown just five TD passes (with nine interceptions). He’s been more active running the football than we may have expected, however; he has 435 rushing yards, helping the Pats to a #3 league-wide ranking with 1811 overall.

Of course, this is a rematch of the Super Bowl from a couple of seasons ago, when the general consensus is that Sean McVay got taken to school by Bill Belichick. And herein might lie the key to this game. In that Super Bowl, Belichick, understanding that Goff was kind of mechanical and not really great at improvising, decided to confuse him with his pass rushing schemes and disguising coverages, following motion as if to play “man” and then switching out to a zone. They also had a nice plan to control the outside zone runs.

Certainly some of the personnel has changed, but it was interesting that Brian Flores, who helped to devise that scheme as the Pats’ “de facto” defensive coordinator, implemented many of the same strategies when his Dolphins played the Rams earlier in the season,. Goff had to air it out 61 times, was off his rhythm almost the whole time and registered his lowest passer rating of the season, by far.

I’m figuring Belichick can pull off that same kind of thing again (until Goff proves he can beat it), so I’m willing to take the points with NEW ENGLAND.

BetAnySports is going to make you a happy handicapper on Thursday Night Football, because you’ll always get a better deal on the odds with reduced juice, you’ll have plenty of props to choose from, and you can make real-time wagers with Sports Betting Prime…….. And you’ve got convenient ways to open up an account, like Bitcoin, which never incurs a transaction fee!